The Kore Gang is certainly one wacky game if I could use any word to describe and it is now available exclusively for the Wii. The Kore Gang is an action/adventure, 3D Platforming title with some pretty cooky characters and some sinister bosses. As wacky as the game looks it is a classic next generation platformer that will only run you $20 and you can’t go wrong there. 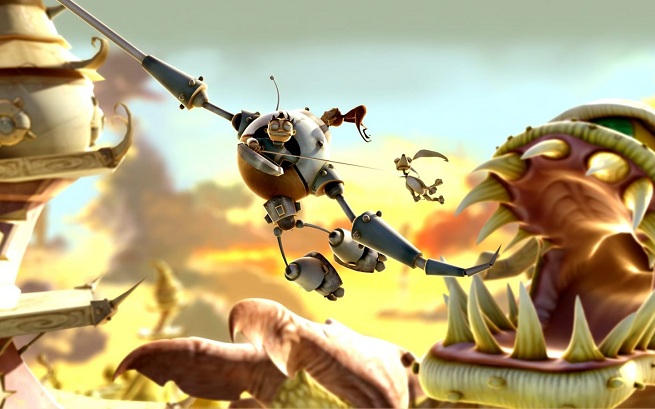 Developed by Pixonauts, you play as Pixie, ‘an acrobatic thrill-seeker who craves excitement’, MadBoy, ‘who has a big heart and even bigger fists’ and Rex, ‘a tiny and fast chihuahua with a big bark’. Manhattan is attacked by the evil Krank Brothers and it is up to this wacky team of three to save the city. The game is now available for the Wii and you can view the full press release below.

LOS ANGELES – Nov. 8, 2011 – Atari, one of the world’s most recognized publishers and producers of interactive entertainment today announced that The Kore Gang™ is now available exclusively for the Wii™ system at retailers nationwide.  Developed by Pixonauts, The Kore Gang is an action platformer which brings to life the exploits of three intrepid adventurers:  Pixie, an acrobatic thrill-seeker who craves excitement; the not-so-agile, MadBoy, who has a big heart and even bigger fists; and, their pal Rex, a tiny yet fast chihuahua with a very big bark.

The Kore Gang finds our heroes in Manhattan when the city is attacked by the evil subterranean Krank Brothers and their Krank Tank in a misguided bid for world domination.  With the populace in jeopardy, it is up to Pixie, Madboy and Rex to save the city and ultimately the world.  With the help of the amazing Kore Suit, robotic armor which greatly enhances the wearer’s natural abilities, developed by the ingenious, yet slightly demented, Dr. Samuelson, Pixie, Madboy and Rex set out on an adventure to confront the Kranks and end their reign of nastiness.

Developed exclusively for Wii, The Kore Gang provides players with a vast underground universe to explore filled with loads of action and puzzles, a humorous story with highly entertaining characters and combat as well as one of the most colorful and imaginative art styles to ever appear on the Wii.  Each character in The Kore Gang provides the players with a distinct play experience and unique abilities – Pixie, excels at jumping and climbing, can utilize booster jets and can avoid danger with a well-timed dance!  Madboy, is all about brawn over brains and can spin and smash his way through countless enemies, he even has the ability to throw objects at his foes.  Rex, while small, is smarter than your average canine and can also control the Kore Suit.  He has the ability to move very quickly on all fours, can stun enemies with his barking and has the ability to locate hidden objects throughout the world.

Developed by Pixonauts, The Kore Gang is now available for Wii at leading retail outlets, such as GameStop, for an MSRP of $19.99.  For more information about the game, please visit www.atari.com/koregang.

Atari (www.atari.com) is a multi-platform, global interactive entertainment and licensing company.   The original innovator of video gaming, founded in 1972, Atari owns and/or manages a portfolio of more than 200 games and franchises, including world renowned brands like Asteroids®, Centipede®, Missile Command®, Pong®, Test Drive®, Backyard Sports®, Deer Hunter®, Ghostbusters®, and Rollercoaster Tycoon®.  Atari capitalizes on these powerful properties by delivering compelling games online (i.e. browser, Facebook® and digital download), on smartphones and tablets and other connected devices. The Company also develops and distributes interactive entertainment for video game consoles from Microsoft, Nintendo and Sony.  As a licensor, Atari extends its brand and franchises into other media, merchandising and publishing categories.