The developers behind The LEGO NINJAGO Movie Video Game, TT Games, are definitely up to something worth taking note of. TT Game’s latest LEGO game ups the conventional way we’ve been playing third-person action/adventure LEGO games with more ingenuity and more skill-based gameplay than ever before. It’s not an entirely original experience overall — most of it still borrows from similar LEGO titles — though TT Games have taken steps to make it feel like NINJAGO  may be the first step in a broader, new direction. The LEGO NINJAGO Movie Video Game, as stated by its title, is based off of the movie which makes it an even bigger surprise that the game is actually semi-enjoyable; but it still hasn’t evolved enough to take that leap into unknown territory.

NINJAGO is centered around Lloyd, a young guy honing his ninja skills to be a great fighter. Lloyd leads an army of Ninjago soldiers to defend their home from the evil Garmadon. And as many stories go, Garmadon is Lloyd’s inattentive father which causes the setup of the entire game to not hold a single moment of hilarity back from the player. That’s about as far as the story expands for that. But no one really gets a LEGO game for it’s story. We often find subtle and absurd charm, wit and humor in this collection of varied games. And NINJAGO is no exception in those regards. 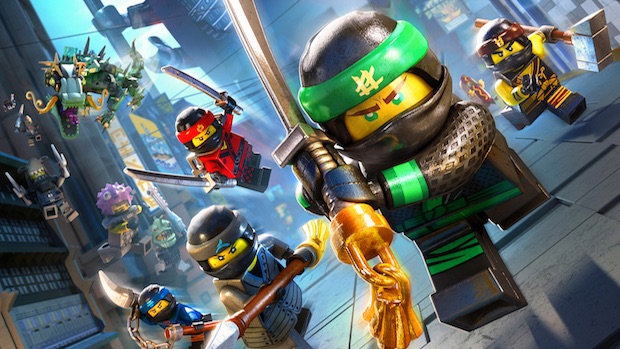 "Since this is a third-person action/adventure title like many other LEGO games, I wasn’t too sure I’d enjoy the mechanics of fighting within this game. I was wrong."

There’s always that odd, almost-Pixar-level of humor and wit within many modern LEGO games, and NINJAGO proves it’s up there. You’ll hear clever and quick quips that just make you giggle, or sometimes you’ll even be rewarded with belly laughing moments that are downright funny. NINJAGO centers its humor around personal bonds and relationships that are centered around the overarching story. You’ll have moments within each area — which are greatly varied — where you get a sense of character developent. NINJAGO is a game designed with family in mind, but the humor and experience with each character throughout have every age covered.

Since this is a third-person action/adventure title like many other LEGO games, I wasn’t too sure I’d enjoy the mechanics of fighting within this game. I was wrong. NINJAGO actually has a skill based fighting system, rather than just mashing a button here or there to win. Let’s face it, LEGO games tend to be an easy food to digest. You run, jump, build. Though this game is very similar in those regards, you’ll also quickly learn of fun combination moves that link up for major damage.

With the training and practice mode you’ll be an expert fighter in no time with lots of rewards for completing move sets. Where other LEGO games were practically button mashers, NINJAGO has a fluid series of key button presses for on-ground and in-air fighting. Tapping two signature button in a row results in damage that’s far greater than mashing the same button down over and over.  You’ll also come across some really cool abilities. The ability tree is standard fair, but this time it’s more intricate and more interactive than previous LEGO games. And with finishing moves, you’ll finally get to scramble that block-shaped enemy into the ground and finish him off with a really cool move, as well.

Similar to other LEGO games is the way you’ll go around each area. Just like in other games like NINJAGO you’ll walk over to a pre-selected location where there’re missing pieces to a puzzle or an item that needs repair. These locations are the same button tap-and-hold segments that you’ve done numerous times before in other LEGO games, so you won’t find anything new here. There are a good number of similar things to do such as finding hidden collectibles, special bricks, and earning tons of money.

One of the bigger problems I have with LEGO titles is the fact that level layouts are very simplistic, and always way too busy for my eyes to follow. NINJAGO tones down the activities upon the screen from time to time, but you’ll still feel as though this is a game from the same mold. There are several different and varied worlds to travel across. You’ll experience all of the cliches of standard LEGO games: plant areas, cities, etc. It doesn’t change much there at all. There are moments when there’s so much going on all at once that you’ll often overlook certain aspects and areas that you need to advance. Luckily for the extra bonus missions within the game, the level opens up a lot more to where it doesn’t all feel jam packed in a small environment. 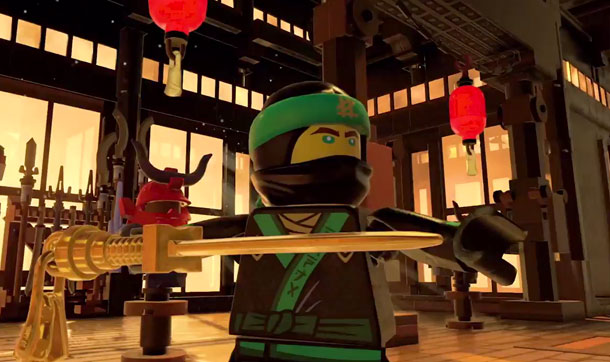 "With a revamped combat system and some genuinely funny moments, you might find yourself enjoying this game more than previous LEGO titles out there."

But with so much interaction and cosmetics constantly shuffling around the level, it sometimes feels overstuffed. Overstuffed adventures is what TT Games likes to do, however, and they do it well. They prove they have a lot to show even after the game ends. Once NINJAGO has wrapped up, you’ll have the ability to play many other modes. There are races that test your speed abilities, extra side quests that involve many other characters that can be gained after the game, and Master Builds mode. The LEGO NINJAGO Movie Video Game is equipped with a very frantic, very fast-paced, and very fun versus mode for 1v1 experiences. .

The music within  The LEGO NINJAGO Movie Video Game is standard for similar titles, even outside of the LEGO universe. You won’t find many catchy tunes that really tug at your ears causing you to whistle along. But at least you won’t find anything that’s super repetitive or annoying, as some of these movie games tend to be.

Voice-overs had great moments of genuine enthusiasm that really felt LEGO-y. Each character got his and her moment and represented their characters as best as they could. And you can really feel the excitement between the cast and their excellent dynamic forged by a family-focused story.

Overall, The LEGO NINJAGO Movie Video Game is a game worth picking if you’re a fan of LEGO games. With a revamped combat system and some genuinely funny moments, you might find yourself enjoying this game more than previous LEGO titles out there.

The combat system is much improved over previous games. The humor is often top-notch and great for the whole family to enjoy.

You'll get a healthy dose of overused moments that came from every LEGO game before this.

Final Verdict:
GOOD
Overall, The LEGO NINJAGO Movie Video Game is a game worth picking if you're a fan of LEGO games.
A copy of this game was provided by Developer/Publisher/Distributor/PR Agency for review purposes. Click here to know more about our Reviews Policy.