Playing through The Sojourn is both entertaining and frustrating. On one hand, it offers occasionally satisfying, complex, and thoroughly challenging puzzles and an abstract, thoughtful narrative. On the other hand, its gameplay and story are minimally connected, and its gameplay can get repetitive and tedious, running longer than it should. I didn’t hate my experience with The Sojourn, but I should have liked it more than I did. I wanted to find something that made its aspects come together and mean something truly special, but ultimately that never happened, souring the experience over time. Though The Sojourn has a slew of satisfying puzzles and a thought-provoking narrative set in a beautiful world, its inconsistencies make for a messy experience that only shines through in certain bright moments. 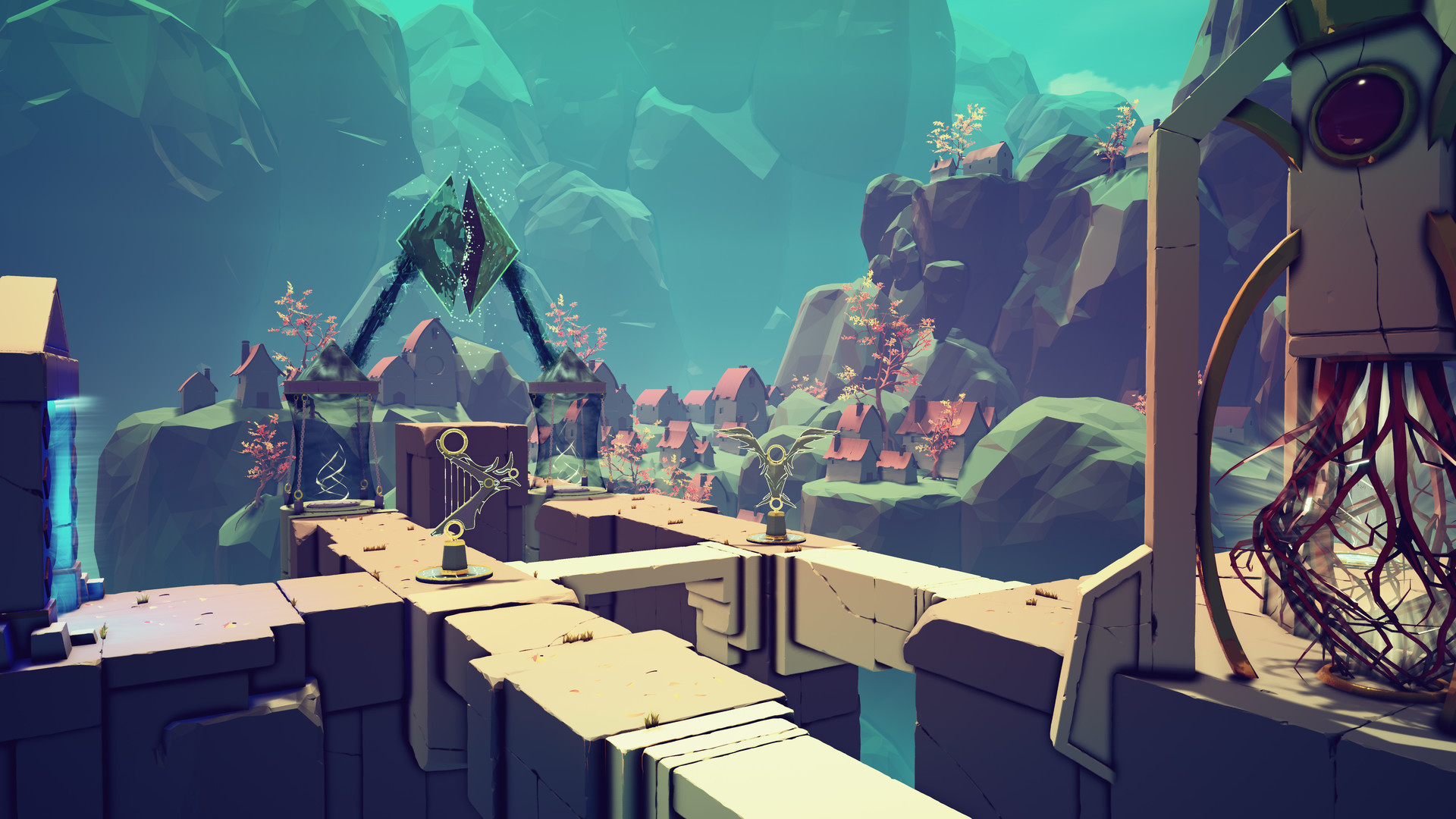 "Though The Sojourn has a slew of satisfying puzzles and a thought-provoking narrative set in a beautiful world, its inconsistencies make for a messy experience that only shines through in certain bright moments."

You enter the world of The Sojourn contextless and directionless, only guided forward by a small light that enlightens your path forward, taking you through the life of a child in the game’s world. You are the eponymous sojourner, there temporarily to view the world, and you only see this story through baroque-style statues that signify important events throughout this child’s life, from birth to leaving its parents and beyond. Each chapter and, moreover, each puzzle is titled and signified with a certain aspect of life, ramping up to match the story as it culminates by the end.

It’s evident from the beginning that something is different in this world. Characters, though they act like normal people, always wear blindfolds, and, without wishing to spoil, it becomes clearer how and why as it pushes forward. As it does, it poses some interesting questions about power, wealth, and enlightenment with few answers. Because it portrays the player as the sojourner without giving context as to who the person you’re controlling really is, you’re able to fully immerse yourself in the world and formulate your own philosophical answers when you return back to reality.

After the initial entry, though, it’s entirely possible to miss the story. As the story of the people you follow is told only through the statues, there’s no dialogue. As you progress through the levels and the journey, you’re free to move quickly to the next set of puzzles, and if you don’t take the time to analyze the statues, it can become confusing quickly. The only other major method of storytelling is through the environments within the puzzles. Every world has its own environmental style and tells its own story, complemented by a diverse color palette and beautiful score. While you’re in the puzzles, though, the environments in the distance take a back seat to the gameplay and can sometimes fall to the wayside entirely. 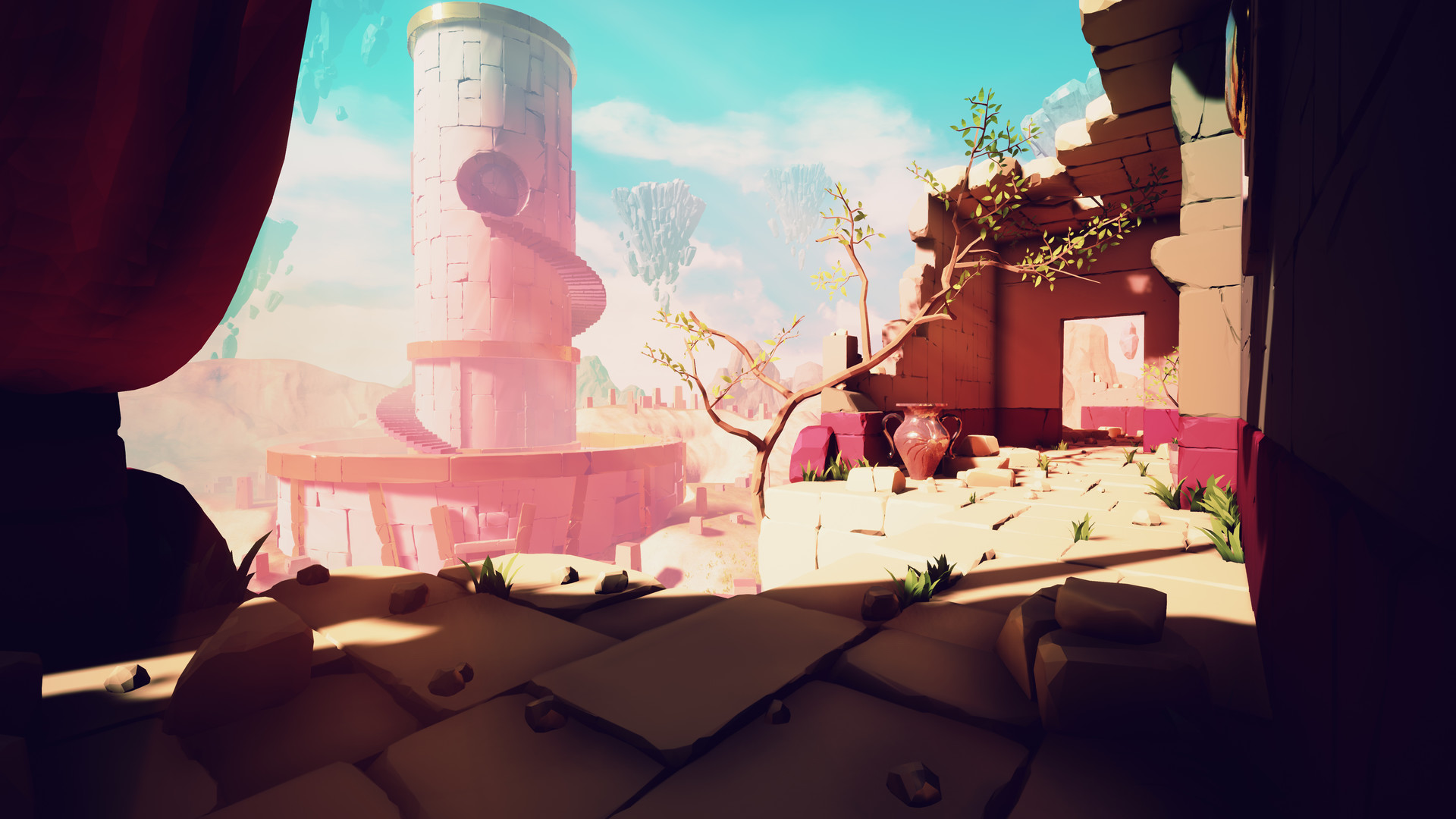 "Every world has its own environmental style and tells its own story, complemented by a diverse color palette and beautiful score. While you’re in the puzzles, though, the environments in the distance take a back seat to the gameplay and can sometimes fall to the wayside entirely."

Filling the space between the narrative segments is the puzzle game at the core of The Sojourn. Your task is to traverse each puzzle to free your guiding light by using a set of statues that provide unique benefits to cross the gaps and avoid the obstacles in your way. The only way to interact with the statues is to enter a “dark” version of the world. In this version, you’ll be able to teleport and switch places with one kind of statue, strum a harp and rebuild broken bridges with another, and send a stream of the darkness across the stage with a third. Stages become increasingly complicated as you find new obstacles, like gates that need to be unlocked by putting a statue in a specified location, and new vehicles into the darkness, like a gate that will let you toggle the darkness every time you walk through it.

As puzzle games go, the primary puzzles are mild. Each puzzle is categorized as its own stage, and each stage is compact, giving you everything you need to solve the puzzle immediately at the start of each stage. This puts much more pressure on the complexity of the puzzles themselves, and the stages are usually simple enough to complete. As it progresses there are some roadblock levels that pose a much stiffer challenge, but the real challenges come in optional stages and challenges, which are the star of the show if you want a more difficult experience. Nearly every level will append another, more difficult challenge onto the stage after you release the light, and you can leave the level and progress the story or continue to complete the second puzzle. The harder post-stage challenges award “merits,” which are effectively scrolls with fortune cookie-like sayings on them, but these are the best puzzles in the game because the journey to get to their end is always rewarding.

Across the campaign, however, there are numerous inconsistencies that make The Sojourn feel like it had separate parts developed in a vacuum. Mechanics are often introduced at seemingly random points in the story, with wide ranges of time between introductions, including a multiple hour lull that leaves little time to acclimate to late-game mechanics before the final push. This causes the game to get tedious at points, feeling like you’re doing the same challenges repeatedly without any new elements, and too fast in others with a barrage of new elements. The progression system also changes in each chapter, switching from an elevator to a mountain climb to a portal that brings you to an entirely different area that contains the puzzles that unlock the path forward. 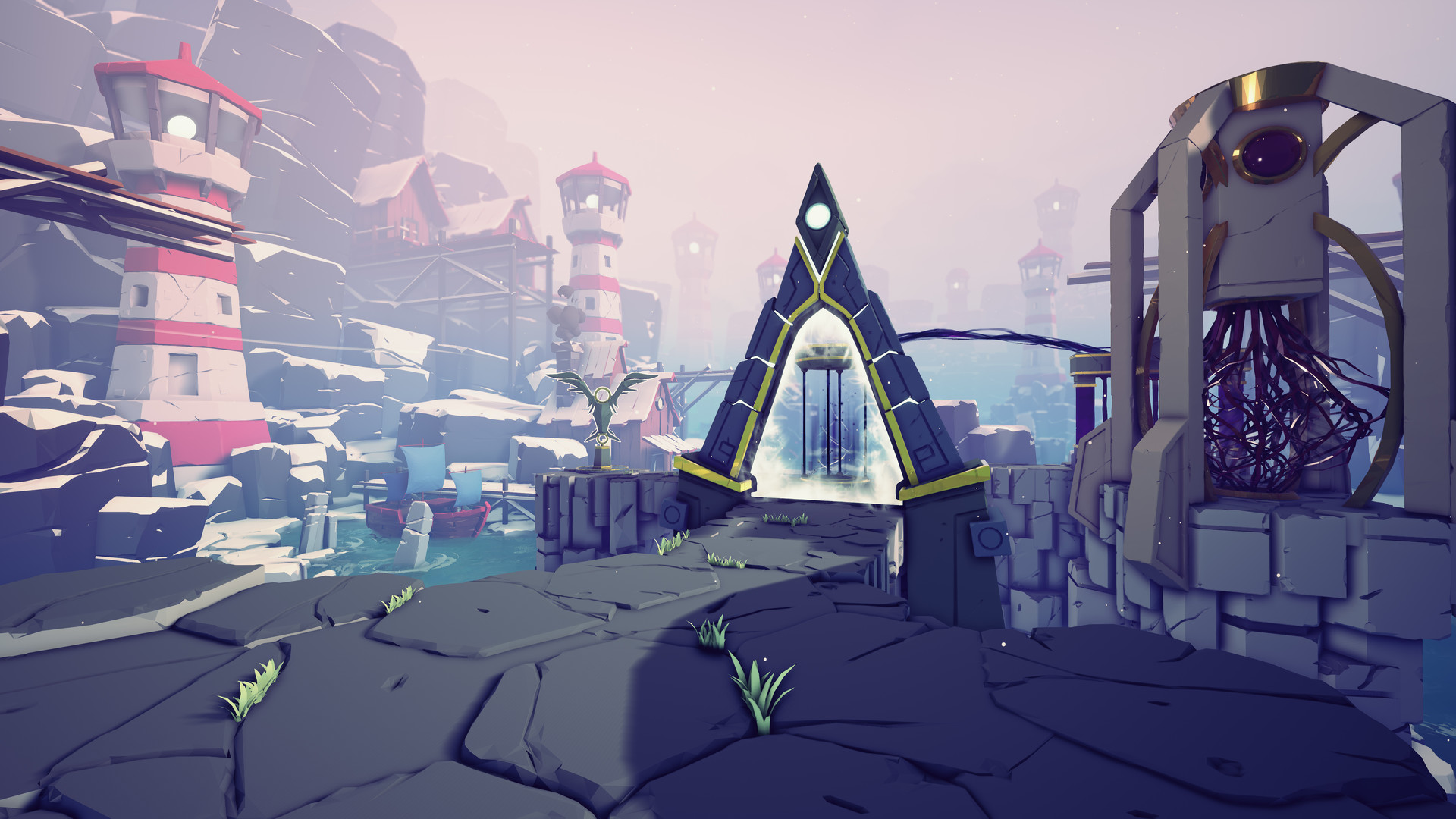 "The Sojourn feels like it had separate parts developed in a vacuum. Mechanics are often introduced at seemingly random points in the story, with wide ranges of time between introductions, including a multiple hour lull that leaves little time to acclimate to late-game mechanics before the final push."

These culminate in a feeling of independence between many of the game’s characteristics, especially between the narrative and the gameplay. Aside from having to free the light at the end of each stage, there is very little reference to the story in any of the puzzles, nor is there any connection between the puzzle elements and the story moments. The puzzles are framed as obstacles that are meant to slow your progress in the story, and it feels as though neither adds anything to the other. The final chapter amplifies this feeling, too, because it stretches its gameplay content to accommodate for the completion of the story. As you progress through the chapter, there are no new elements introduced, and the puzzles do not get significantly longer, more complex, or more difficult. There is no reason for it to continue as long as it does aside from the completion of the story. This makes what is ultimately a 6-8 hour experience feel like it overstays its welcome. While the gameplay itself is usually satisfying, by the end you’re ultimately completing the same task every time, and it doesn’t feel like it has gotten any more difficult or it is paying off the work you’ve put in to get there.

Throughout The Sojourn’s playtime, you’ll find some bright moments, both in the puzzles and in the narrative. If you take the time to delve into the story, it offers some profound questions, and the puzzle gameplay is rewarding, especially in the harder optional challenges. However, to get there, you’ll have to chug through immersion-breaking design inconsistencies and an experience that takes too long to wrap up. The puzzles and narrative are interesting on their own, but, as a full package, The Sojourn has disappointingly independent elements that make it a messy experience.

Story and gameplay feel independent; inconsistencies in pacing and progression; tedious and repetitive gameplay by the end.

Final Verdict:
FAIR
The Sojourn has an effective story and occasionally rewarding gameplay, but its inconsistencies in gameplay, pacing, and progression make it less than the sum of its parts.
A copy of this game was provided by Developer/Publisher/Distributor/PR Agency for review purposes. Click here to know more about our Reviews Policy.