The Surge 2 Review – Oh, I’m Gonna Get That Arm

You should probably be dead. After surviving a plan crash above Jericho City – this game isn’t subtle – your character wakes up in the medical bay of the local police station with absolutely no idea how they got there. All you know is that you’re reliving the crash in your nightmares, all of which prominently feature a little girl, and that the station is a wreck. Enormous monsters prowl the halls, the inmates are out of their cells, and the cops that remain are desperately trying to maintain order. Absolutely none of them are friendly, so you pick up the first weapon you can find – a pair of defibrillators – and murder everyone who stands between you and freedom.

Like most of Deck 13’s recent output, The Surge 2 steals a lot of its ideas from a certain series of action RPGs developed by From Software. Game critics have made so many comparisons to From’s work that there are entire Twitter accounts dedicated to how absurd it is. It’s a shame, because the comparison is valid here. If you’ve played a From game in the last decade, you are probably familiar with the basics of how The Surge 2’s gameplay works. Playing it generally goes like this: leave the latest medbay or safe area, murder a bunch of enemies on your way to whatever your current objective is, kill whatever boss you need to kill or get whatever you need to get, and then either find a new medbay or backtrack to an old one to upgrade your Exo-Suit, bank your scrap, and craft and upgrade new armor and weapons. Rinse and repeat and you have The Surge 2’s core gameplay loop. Sound familiar? 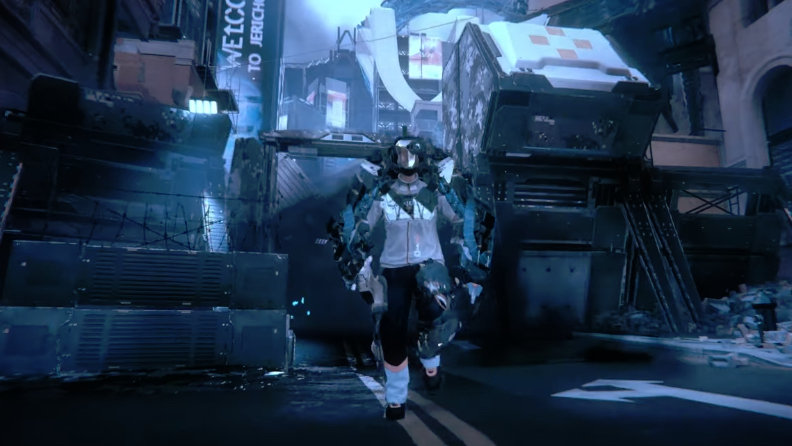 "Cutting off an armored body part – or the hand carrying a weapon – takes longer, but rewards with you scrap, schematics for weapons and armor, and the parts necessary to construct and upgrade them."

Dying means you’ll lose whatever Tech Scrap (read: XP) you’ve gained along the way and you’ll be spawned at the last medbay you used. As in From’s games, you can head back to where you bought the farm and reacquire what you lost, but dying again means it will be replaced with however much scrap you’re currently carrying. Dying – or using a medbay – also respawns every enemy you’ve already killed, which means getting back what you lost can be challenging and death has consequences. In From’s titles, you can make your way back to what you lost at your own pace, but The Surge 2 puts a time limit on it. You can increase said limit by killing enemies along the way, but it’s still an extra layer of tension on a system that’s already tense, especially since you’ll have to fight back through enemies you’ve already killed to get there. It’s not immediately clear why the random prisoner and his big metal stick you just killed respawn whenever you use a medbay, but that’s the way it is. It’s all pretty standard stuff for this type of game.

What sets The Surge 2 apart is its combat and upgrade system. Like most games of this type, you acquire materials by killing enemies, but there’s a trick to it. When you target an enemy in combat, you move your targeting cursor to select specific body parts. Do enough damage to a body part, and you can cut it off with a rather gruesome execution that’s weapon specific and a lot less fun after you’ve seen it a dozen or so times. You can also target unarmored body parts for more damage and faster kills. Cutting off an armored body part – or the hand carrying a weapon – takes longer, but rewards with you scrap, schematics for weapons and armor, and the parts necessary to construct and upgrade them. Why you can’t just rip the parts off their corpses is beyond me, but it does add a layer of strategy and tension to the combat that otherwise wouldn’t be there. If you want better gear, you’ll have to earn it.

By far the fastest way to deal with enemies is to parry their attacks, which requires blocking in a specific direction just as their attack is about to hit you. It takes work to nail the timing, but with practice – and the implant that tells you what direction the enemy is attacking from – I eventually nailed it. Whiffing leaves you open to big damage, but the rewards are more than worth it. The other major difference in The Surge 2 is that instead of light and heavy attacks, your character uses horizontal and vertical moves. These can be chained together to create combos that are fairly freeform, but the real benefit is that they allow you to deal damage to specific body parts, ensuring you get to cut off the side of beef you want before the enemy in question dies. You can lock onto specific body parts, but unless you use the right attacks to actually damage them, it’s a moot point. 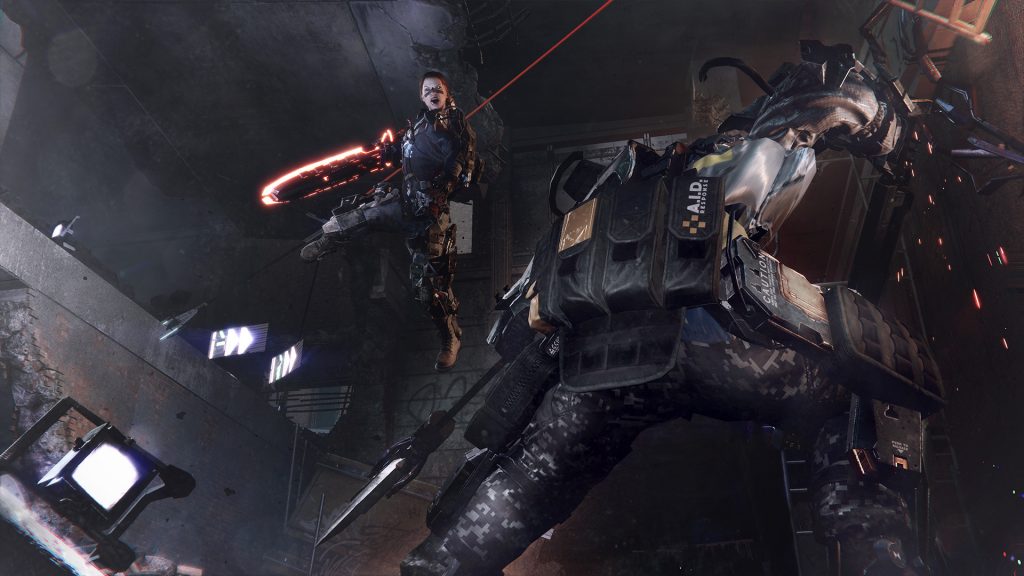 "Each piece of armor and implant has a power cost associated with it, so there’s some min-maxing to be done if you want to equip the best things you can."

Other than that, The Surge 2’s combat works a lot like how you’d expect it to. You have a stamina bar that dictates how often you can attack, dodge, sprint, block, and parry, and you can acquire a drone that can target individual body parts and attack from a distance. As you fight, your Exo-Suit will build charge in its battery, which, when paired with certain implants, can heal you, so staying alive means fighting. Killing enemies also builds a multiplier that increases your rewards the longer you stay away from a medbay. All of these combine to make for a combat system that rewards you for fighting as much as possible. It’s a fun little system, and crafting new gear is interesting because you actually have to think during combat to do it. The fact that all of it feels and sounds good is just a bonus.

Certain social features From pioneered have also made the transition, all of which are accessed through your drone. You can leave graffiti around the environment that will alert other players to hidden enemies, paths, and items. You can also track down Revenge Enemies, which are baddies that have slain other players for extra rewards and hide a banner that rewards you with scrap if only a few players manage to find it. These features keep the environments from growing stale and encourage exploration, even if they are somewhat derivative.

Leveling up means heading back to a medbay and spending your scrap and materials to craft new gear and upgrade your Exo-Suit. Scrap can be spent to upgrade your health, stamina, and battery, and each upgrade adds a power core to your suit, which allows you to equip more gear. Each piece of armor and implant has a power cost associated with it, so there’s some min-maxing to be done if you want to equip the best things you can. Thankfully, the game allows you up to three sets that you can swap between, making inventory management a little less of a chore. 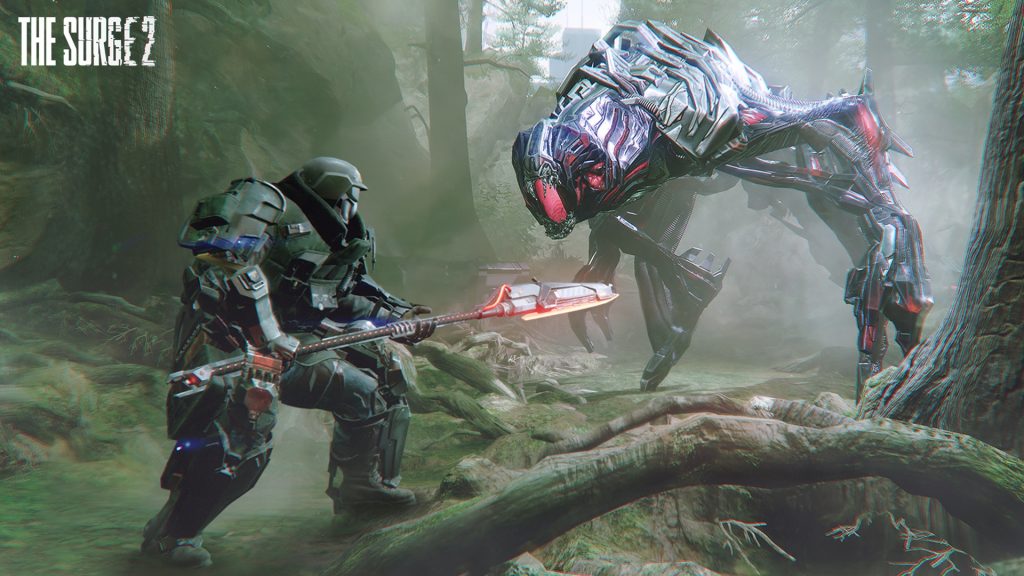 "The Surge 2 takes itself very seriously, but a lot of it is the typical, predictable “the-stakes-are-way-too-high” storytelling that plagues so many mass market games, and I just couldn’t bring myself to care."

The Surge 2’s combat is good, but unfortunately, the rest of the game can’t match up. Jericho City is a big place, with several areas to explore, and the game does its best to vary them up. The port is a waterlogged and rusted husk, the hospital is spooky, and the streets are littered with rubble and he ruins of buildings. Navigating them means traversing magnetic lifts and zip lines and creating shortcuts by opening gates where you can. None of these areas is bad, but they’re not particularly memorable, either. They all share the same “beautifully destroyed city” vibe that has been prevalent since the original Gears of War. The most interesting thing here is the verticality present in the environments, and how they connect, but there’s nothing particularly new or groundbreaking here. The game also has a serious issue with frame tearing, even on the Xbox One X, that brought down what it otherwise impressive visual and environmental design.

The story is worse. The Surge 2 tries to build intrigue, asking questions about you, the plane crash, and the little girl who appears in your dreams, and the city isn’t short of people to talk to and do quests for. Unfortunately, none of it is particularly memorable, and I wasn’t invested to enough to care about anything beyond my next quest objective. The Surge 2 takes itself very seriously, but a lot of it is the typical, predictable “the-stakes-are-way-too-high” storytelling that plagues so many mass market games, and I just couldn’t bring myself to care. If you’re looking for environmental storytelling with depth or a particularly moving tale, you’re not going to find it here.

At the end of the day, The Surge 2’s appeal lies almost entirely in its combat and how much of a fan you are of this kind of game design. It’s not a bad game, but it’s not a particularly memorable one, either. Outside of the combat, there isn’t much that makes it stand out. If you like this kind of design and don’t much care for originality, you’ll have a lot of fun chopping people up across Jericho City, and I can see people choosing to play this game for a long time because the combat is so compelling. As for me, I think I’ll be taking the next flight out. Jericho City’s a nice place to visit, but it mostly reminds me of other worlds with more to offer. And all the severed heads in the world aren’t going to change that.

Compelling combat system. Upgrading gear is fun. Lots of weapons to use. Environments have a lot of verticality. Solid visual design.

None of the areas stand out. The story isn't interesting. Lots of screen tearing. You have played this game before.

Final Verdict:
FAIR
The Surge 2 has great combat, but no areas stand out visually, a forgettable story, and the feeling that you've done all of this before makes Jericho City a place you'd want to visit, not live.
A copy of this game was provided by Developer/Publisher/Distributor/PR Agency for review purposes. Click here to know more about our Reviews Policy.