The Surge: The Good, The Bad And The Augmented DLC Review – Little More Than A Flicker

Reached for the sky, but doesn't get there.

When The Surge launched back last year with its robotic take on the Souls formula, the good folks at Deck13 did what amounts to what we felt was mostly just an OK take on the popular action RPG formula. We got to check out a bit more of the world of The Surge last year with A Walk in the Park finally allowing us the catharsis of destroying those creepy mascots that scarred us as children, and generally leaned into the things that The Surge did really well, helping to show where the series could fit in a genre that’s becoming more crowded. 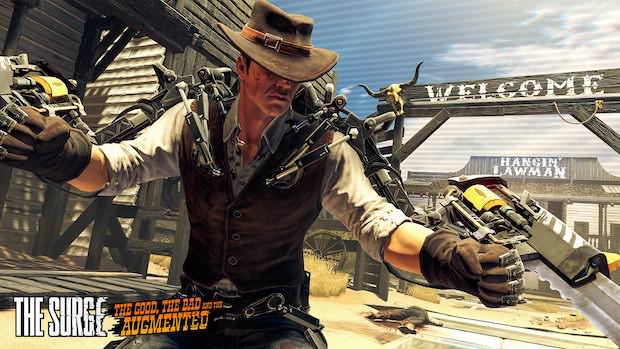 "While the Wild West aesthetic pitted against the cyberpunk setting of the game is a rather fresh take, the few ideas that are added to the game due to that don’t do nearly enough to stretch out for the 9 separate challenge episodes the expansion asks of you."

But The Surge is also receiving this expansion over 18 months after launch, and after the announcement of a full sequel which will hopefully help to iron off some of the rougher edges of the first game. Not to mention that the game never really set the world on fire to begin with, what place is there for The Good, The Bad And The Augmented? Well, not a lot.

Ahead of the announced sequel, The Good, The Bad and The Augmented unfortunately doesn’t follow suit with selling itself as a distinct thing from the Souls series, at least not well. It certainly breaks from the highly established progression formula where you fight your way around an interconnected world and open shortcuts, helping you gain more and more ground as you develop both your equipment and yourself as a player. Instead, the new expansion takes a drastic right turn into a series of trials, pitting players against a variety of combat situations on designed maps, with specific goals to change up how you need to approach the brawl for the most rewards.

While the Wild West aesthetic pitted against the cyberpunk setting of the game is a rather fresh take, the few ideas that are added to the game due to that don’t do nearly enough to stretch out for the 9 separate challenge episodes the expansion asks of you, or even begin to combine them in ways nearly as interesting as they probably could. You’re not having to change your play style that much to account for the heat of the sun beating down on you and slowly draining your resources. You won’t find yourself needing to learn drastically different enemies or be fast on your toes around networks of runaway mine carts. You’ll exhaust the new ideas that the expansion brings within a few missions, and it never gets better. 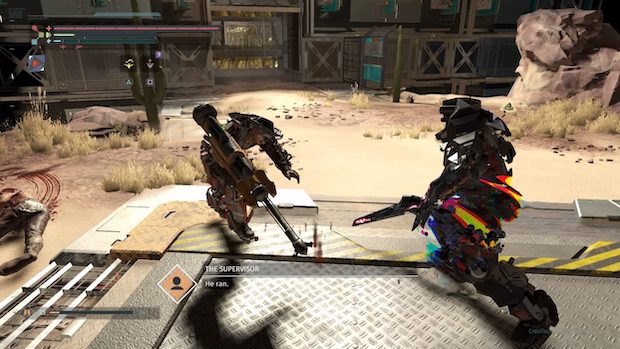 "Narratively, there is very little tied into the rest of the game or world to be found in The Good, The Bad and The Augmented. "

The expansion of course, just like A Walk In The Park, also introduces a bevy of new weapon and armour sets to gun for, though aside from fun cosmetic differences that somewhat clash with other areas of the game, like putting a Mexican wrestler mask on before heading back to the main game to see what a Guacamelee crossover would look like, the equipment doesn’t justify itself much through power or function over items obtainable before the content launched. Items which were likely levelled up far beyond any of the new pickups well before the DLC ever launched in the first place.

Narratively, there is very little tied into the rest of the game or world to be found in The Good, The Bad and The Augmented. The Supervisor, the mysterious figure who created the trials you undergo, simply challenges the player to see if they can “modify the west”, with little relation to CREO or the player character’s journey. To cap off each of the nine episodes, which are typically closed off within 30 minutes, the player will fight against a “Challenger”, which are all unfortunately, relatively normal looking. The rest of the expansion clearly isn’t taking the lore of the game seriously, very much to the game’s credit. So why not go big and extravagant with the bosses in ways that other action RPGs do? It’s a missed opportunity in an expansion almost completely focused on the combat.

Though the bosses are nothing special to begin with, if you don’t quite have a handle on the controls after a while away from the game, then Lucky Coins, found in areas ahead of that final showdown, can offer an extra shot against the big bad of the area. It’s a surface level change all told, and doesn’t really add the kind of risk and reward element the team was going for. Unfortunately, the general theme of the entire expansion comes out to be “Well, it exists”. There simply isn’t a lot going on. 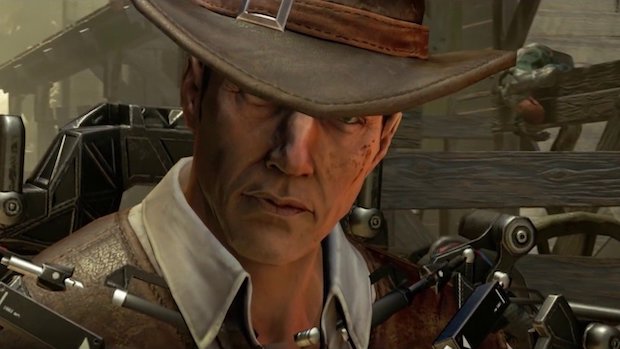 "With a sequel just around the corner, The Good, The Bad and The Augmented is a bit tricky to recommend to all but the most dedicated to The Surge. "

What helps stretch the game out a lot further beyond what would otherwise be a 5 and a half hour run time is the modifiers that you can take on once you clear an episode for the first time, which multiply your gains for every one you equip. Sure, you did it once, but can you do it again with no sound, a film grain and that old spaghetti western piano plunking as your only backdrop? What about if your enemies explode should you not properly dismember them like a Dead Space Necromorph? Weapon roulette needing you to be proficient with every kind of instrument? It’s an additional layer of challenge and distraction that can help prop up repeated playthroughs of a challenge, but otherwise isn’t bringing in anything major.

The unfortunate thing is that while this mechanic does help smooth over the short runtime by some margin, the fact remains that you’re still replaying the same content again, for rewards that don’t mean much and an unconnected piece of story that doesn’t tie back into the base game. Natch.

With a sequel just around the corner, The Good, The Bad and The Augmented is a bit tricky to recommend to all but the most dedicated to The Surge. But while the aesthetic is interesting and the challenge modifiers you can play with after the first mission are fun, there’s not a whole lot else to be found in the expansion outside of strangely missed opportunities. You could have capped off these crazy challenge gauntlets with the giant spider from that Will Smith movie, Deck13, but you didn’t. You didn’t.

The western environment and aesthetic is super fun, and the challenge modifiers bring a nice variety and replay value.

Final Verdict:
BAD
The Good, The Bad and The Augmented isn't exactly bad, it's just that it does so surprisingly little compared to the last piece of content, that it feels lacking with the sequel expected within the next year. And this town isn't big enough for the both of them. Pretty hard pass unless you're dying for more Surge.
A copy of this game was provided by Developer/Publisher/Distributor/PR Agency for review purposes. Click here to know more about our Reviews Policy.