One year ago, Nintendo launched its successor to the record breaking Nintendo DS handheld. At that point, the DS was seven years old, and, never a technical marvel, it was growing really long in the tooth. Regardless, the system had built over the years an enviable and almost uncontested library, and it had experienced sales like no other gaming system before. The DS had essentially conquered the world. With the 3DS, Nintendo was expected to do the same.

And with the 3DS, Nintendo messed up everything they could. A botched launch, confusing marketing, no games, no features, possibly everything that could go wrong with the 3DS, did. It was basically the handheld equivalent of the PS3- the overpriced successor to the most popular machine of all time launching with high anticipations in the lead up to launch, and then basically bombing. However, a rapid price cut helped the 3DS back on its feet, and soon, the games began to come.

And when they came, they came at a relentless pace.

In one year, the 3DS has amassed an incredible library of high quality AAA titles, available across both, retail and digital storefronts. Barely a year ago at this point in time, it seemed like the handheld was doomed to a quick death and no games. Right now, as the fastest selling system of all time, it is building a library of software that, like the DS’s, will most likely go uncontested.

Here are the ten best games available on Nintendo’s flawed handheld. If you are a 3DS owner, you owe it to yourself to get these games now and play them all.

The 3DS launch lineup was nothing to write home about. Whereas it covered pretty much every type of game pretty well- from fighters to simulation, to racing, to shooter, to yes, strategy, the quality of the games themselves on offer was largely underwhelming. Critics were quick to bestow the 3DS port of Super Street Fighter IV high points and recommend it to all buyers. And so, this gem of a launch title went unseen and underappreciated by pretty much everybody.

Shadow Wars bears no resemblance to the other games in its series. It’s a tactical grid based strategy game, in the spirit of Advance Wars and Civilization. With modest graphics, and a less than stellar narrative, the game focuses almost entirely on its gameplay, and that is where its true genius shines through. As a turn based strategy game, Shadow Wars is perhaps one of the best examples of its genre.

Whereas its poor commercial reception probably is disappointing, it means that the game is now available for incredibly cheap. Most places sell it for $19 new, and you owe it to yourself to pick the game up. Don’t expect it to impress you with its great use of the system’s 3D, or any of its features, for that matter. As a focused single player strategy game, Shadow Wars will endear itself to you purely on the strength of its game mechanics and design alone.

We complained, Nintendo listened. Learning from the debacles of DSiWare, for the 3DS, Nintendo created an online storefront that offered great content at cheap prices, and they spearheaded the charge themselves. Among the games that exemplified Nintendo’s new approach to digital gaming, Sakura Samurai is one that stands out the most. A pick up and play action title, Sakura Samurai offers a meaty adventure that takes its titular protagonist across a beautifully realized game world on her quest to- you guessed it- save the princess.

With charming graphics, great sound design, addictive and varied gameplay, stunning locales, memorable NPCs, and the typical Nintendo charm, Sakura Samurai is an incredible title that should serve as a great counter argument to those that believe smartphone gaming will ultimately kill off handhelds. As a full fledged adventure specifically designed for portable gaming, available at an incredibly cheap price, Sakura Samurai is unmatched on any gaming platform.

At its current prices- it goes for $6.99 on the eShop- it’s a freaking steal. There’s literally no reason for you to not have downloaded this game already. 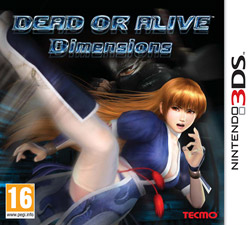 The 3DS launched with Capcom’s stellar port of Super Street Fighter IV as the premier launch title, but that game very quickly found itself outdone, as the system soon got another fighting game that not only flawlessly transferred all the mechanics of its series onto the portable, and then even somehow managed to progress the series further. Dead or Alive: Dimensions was a technical showcase for the system with its stunning graphics, and its mechanics that had somehow survived the transition to portable gaming intact, but it was the fact that it was perhaps the most full featured Dead or Alive game till date- offering more characters than any other game in the series, and offering a series straddling story mode, and offering a full fledged online mode- that won everybody’s hearts.

Dead or Alive Dimensions played with the series’ trademark focus on speed and combo chaining, and it retained the games’ traditional focus on, er hem, the female anatomy. For any 3DS owner who was starved for content at the time of this game’s release- pretty much anybody who owned a 3DS, that is- this game was a welcome relief.

Available for very cheap now, Dimensions is another game that is recommended to any fighting games fan who owns a 3DS. You will not be disappointed. 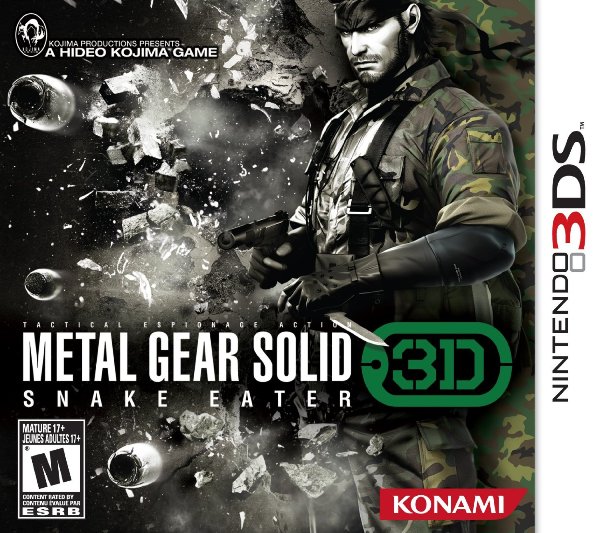 Nintendo shocked everyone at E3 2010 when they announced that for the 3DS, they had won the support of Kojima and his Metal Gear Solid series- an honor usually reserved for Sony systems. A 3D remaster of the third game in the series (chronologically the first. Don’t ask) was announced, and shown off as the technical showcase for the system, its stunning graphics being trumpeted as proof of the little handheld’s power.

Over time, the port soon got downgraded, and the final product was a far cry from what had initially been shown. And yet, the underlying game is so incredible that Snake Eater 3D, even in its compromised form, remains one of the best games on the system. Although the controls might take a bit getting used to, the game remains stunning, with possibly the best design and best story in the series. The incredible graphics and great music only add to the game’s atmosphere, and while the throwaway 3DS specific features, such as integration of the gyroscope and the 3D camera, are distractions at best, the sheer value of the core package makes it hard for anyone to avoid this game.

People often moan that Nintendo systems lack content targeted at the mature gamer. Well, here we have one of the best games ever created, a game that is by all accounts ‘for the mature gamer,’ and it’s playable on the go. Unless you have already recently invested in the HD Collection, this game is a very tempting deal, one that I heartily recommend.

6. THE LEGEND OF ZELDA: OCARINA OF TIME 3D 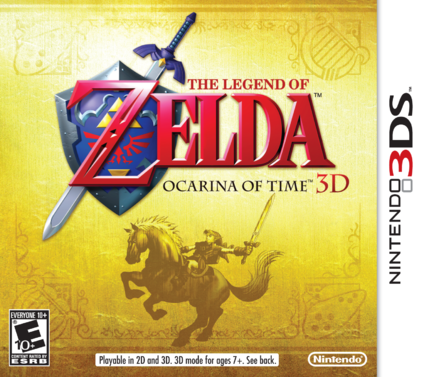 Another remake (the last one on this list, I promise), The Legend of Zelda: Ocarina of Time 3D was perhaps the 3DS’s first ‘system seller’ (a bit sad when you consider that it is the remake of a thirteen year old N64 title, but such is life). Featuring fully enhanced graphics, a reworked interface that takes advantage of the 3DS’s touch screen and (sometimes) its gyroscope, and a new boss rush mode, Ocarina of Time 3D modernized what has often been called the single greatest game ever created, and condensed it to portable form, for a new generation of gamers. The nostalgia factor at work also made it incredibly tempting for people who had grown up playing the adventures of the Hero of Time.

What is there to say about this game? It’s Ocarina of Time. It’s arguably the blueprint for modern 3D game design. The enduring tale of the boy who comes of age and saves the kingdom from great evil, Ocarina of Time is a game that does not show its age, in spite of the fact that most of the mechanics it pioneered fourteen years ago have since been bettered and perfected. The strength of its game design and mechanics shines through, and minor anachronisms, such as static backdrops, or a baffling save system, all pale before the strength of the game’s level design.

Excellent graphics, incredible soundtrack, and one of the most enduring game designs of all time, Ocarina of Time 3D was a treat, and a great celebration of the Zelda franchise’s twenty fifth anniversary. But now it’s done and behind us. Nintendo, bring on Majora’s Mask 3D.

The Outer Worlds, originally released back in 2019, seems to be getting a current-gen upgrade for PS5 and Xbox...

Check out the new trailer showing off the melee-centric Preacher class for upcoming co-op shooter Warhammer 40...