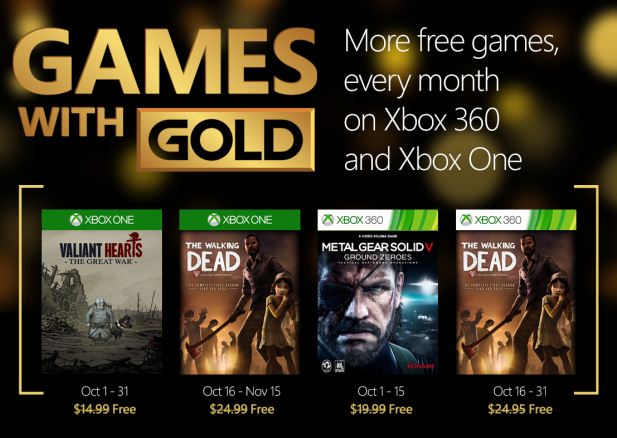 Continuing with their strong showing for Games with Gold, Microsoft have prepared a rather good lineup of games available to Xbox gamers for October for free, as long as they are subscribed to the Games with Gold program. Xbox One owners get their hands on the excellent Valiant Hearts, a beautifully drawn and stylized story about the first World War, that Ubisoft released on the UbiArt engine last year; they also get the complete first season of The Walking Dead for free.

Xbox 360 owners also get the complete first season of The Walking Dead for free, and they also get Metal Gear Solid V: Ground Zeroes as well. Ground Zeroes was previously already available with Games with Gold for the Xbox One, so this is the first time that the Xbox 360 version of the game has been offered.

It’s not as strong a showing as Microsoft have had in the last couple of months, but it is still overall a good selection, and not something that I can find any reason to find complaint with.