Posted By Jordan Garland | On 06th, Apr. 2012 Under Previews | Follow This Author @MostUnfurrowed 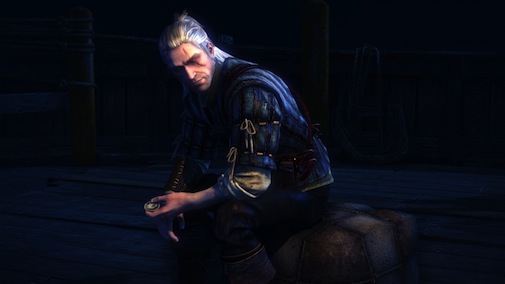 To many, the announcement of an Xbox 360 version for The Witcher 2: Assassins of Kings a mere two weeks after the release of the PC version, was a strange on, especially given that the game was widely regarded as the epitome of what PC-only development. A game released and created without the spaghetti-covered hands of the console sullying up this holy process, the very notion after-the-fact console port was laughable, to some. On the other hand, it’s very easy to see why CD Projeckt RED made such a decision on the back of such tumultuous acclaim and to date has won a staggering fifty awards ranging from best graphics and best RPG to GOTY.

Just over a year on from the PC release, I got my very own spaghetti-covered hands on the Enhanced edition of The Witcher 2, playing through most of the prologue; us lowly console owners are in for a treat. To the uninitiated like myself ,The Witcher 2 -spawned from the eponymous Polish series of books- follows the adventures of Geralt of Rivia, the personal ‘witcher’ for King Foltest, a man who sounds strikingly similar to the antagonist in the Monkey Dust American film parodies. A witcher is a genetically enhanced human -see: magic-, viewed unfavourably by many in Temeria. The game obviously follows on from the events of the first game, not that any specific prior is required other than that it takes place almost immediately after the first game, which finished with an assassination attempt on HRH King Foltest.

The very first thing that strikes you about this game is the utterly marvellous opening cinematic, which didn’t originally feature in the PC version, and is both visually and aurally stunning. It features a witcher and spacemarine  ‘Kingslayer’ or Letho, as his friends call him, ambushing a royal naval vessel, freezing everything in sight and single-handedly obliterating both the King’s entourage, as well as his spinal chord. Yes, you’ve guessed it, this is a violent game. 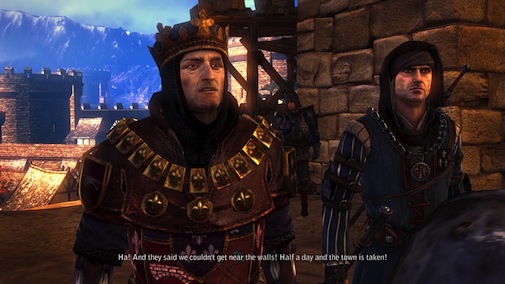 CD Projekt Red took to decision to not just make this a simple port, but also redress the  elements of their highly critically acclaimed game which hailed some criticism. From the off it now features a tutorial, a much maligned absence in the ‘original’, now gently lowering the player into the warm bath of gameplay, rather than scalding you with too much, too soon. Another more minor, if equally welcome addition, is a choice of either HD or SD fonts, it’s nice to see those without the luxury of high definition still being catered for.

An obvious drawback of a console adaption is the mapping of controls; reducing an entire keyboard down to 12 buttons, plus joysticks, but the scheme really has translated well: heavy and light attacks with X and A respectively, LT to target, RT to block/parry, B to dodge, Y to conjure magic and LB to bring up weapon/magic selection. Magic also comes in five flavours: fire, stun, shield, trap and control, although with far more Scandinavian names in-game.

The control system creates for some surprisingly fluid gameplay which is satisfyingly brutal in places, especially during the staple ‘cinematic’ finishers which feel and sound as good as they look. That said, it can occasionally leave one open for side and rear attacks, even when parrying, but I feel this may be down myself having not upgraded Geralt enough as further up the tree, there seem to be provisions for this. Another interesting feature within the upgrade system is that to begin with, one can only upgrade Geralt using the ‘training’ upgrade tree, only allowing specialisation once this tree has been entirely satiated, serving as another means to slowly introduce various facets of gameplay. 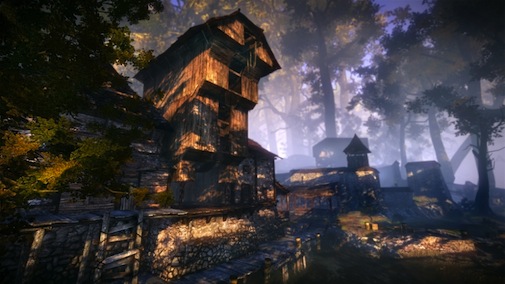 One of the most highly praised aspects of the PC version was its glorious and instantly identifiable soundtrack and is instantly apparent as to why it was so revered. Sound as a whole seems to be one of The Witcher’s strengths as almost all of the NPC interaction and cutscenes are hugely engrossing and certainly should never be skipped. The gameplay starts with the storming of a castle at the behest of King Foltest, as well as a huge dragon in an intro which I earnestly feel far surpasses that of Skyrim. Subtitles are on by default and, in a neat little twist, appear directly above the character’s head, cleverly preventing that occasionally irritating need to flit between the bottom and top of the screen in order to follow dialogue.

Once the virtually contextless tutorial is completed, Geralt awakes with an entirely naked Triss Merigold, a move which I embrace as openly as Geralt did. It’s high-time that more games stopped pretending that sex doesn’t exist in games and whilst we’re certainly getting there, there’s still this knee-jerk moral outrage because we also happen to control the characters at other, separate parts of the game. I’m not condoning interactive sex mini-games, stop being stupid, but intimacy between characters is something which needs to be explored in order to create fully three-dimensional, relatable people, not just ‘characters’. That said, CD Projekt really shot themselves in the chest with this.

It’s quite refreshing to have a game which features the medieval English without all of them being exclusively from Romford. The Witcher 2 features a plethora of English stereotypes, ranging from the archetypal Alan Rickman, to the flatcap-toting charms of North Yorkshire. 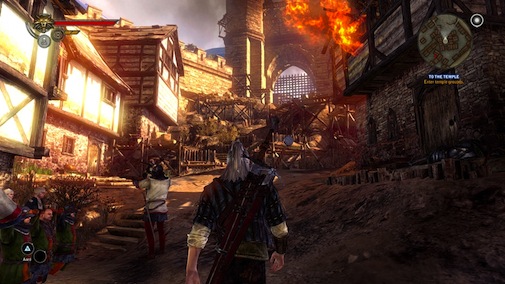 The only real criticism I gave reward this game, at this time, is the occasional hideous texture-pop in but that’s precisely what happens when a visually intensive game like this has to be adapted for consoles and upon installing it to my hard-drive, as recommended by the game, most of these issues seem to have been redressed.

If this is what happens when a PC game is adjusted and re-released for the console market then I, for one, welcome it with open arms.  Even during the brief 90 minutes I had with Geralt and Friends, I’ve had an insatiable itch to continue and feel it could well be the start of a beautiful friendship.

GamingBolt’s full review of The Witcher 2: Assassins of Kings – Enhanced Edition will be with you on April 14th.