This Photorealistic Game Developed By A Solo Developer Is Looking Stunning

Project Gray is looking like a really impressive open-world, and it's all being developed by a single person.

The open-world genre has been one of the most prominent ones in the games industry for some time, and the popularity of this style of games doesn’t seem to be waning down anytime soon. While there are a ton of open-world games coming in the near future that are worth keeping an eye out for, a recurring issue with them is they have started to feel all too similar to each other in terms of setting or mechanics. And this has been the driving factor in the homogenization of this genre. But every now and then, a new game comes around that ends up being really different from anything on the market- and this feature series is dedicated to such types of games.

One such game is Project Gray, which is currently in development at a Korean Studio by the name of In-D. This indie studio is composed of just one man, who is currently hard at work on this seemingly amazing concept. Project Gray is shaping up to be a complex game with a lot of moving parts and inspirations, and to that end, we can’t help but ask the question – what the hell is exactly Project Gray?

Project Gray is an open-world action RPG that’s currently in development at In-D. The game is set against the planet of Asirma. An ancient civilization by the name of Gray has somehow appeared on this planet, which has gifted some special abilities to the player character who is a native of the planet. Now though, a darker secret about the Gray civilization is driving a wedge between the natives and the ancient ones and now it’s up to you to send these aliens back where they came from. This unlikely marriage of advanced technology and native cultures sounds a lot like Horizon: Zero Dawn, and we are here for it. And while it’s a simple tale on the surface, the developer seems to have paid a ton of attention to the actual world-building with proper nomenclature for the planets and the many races that inhabit them – which is pretty astonishing considering that only a single person is at the helm. 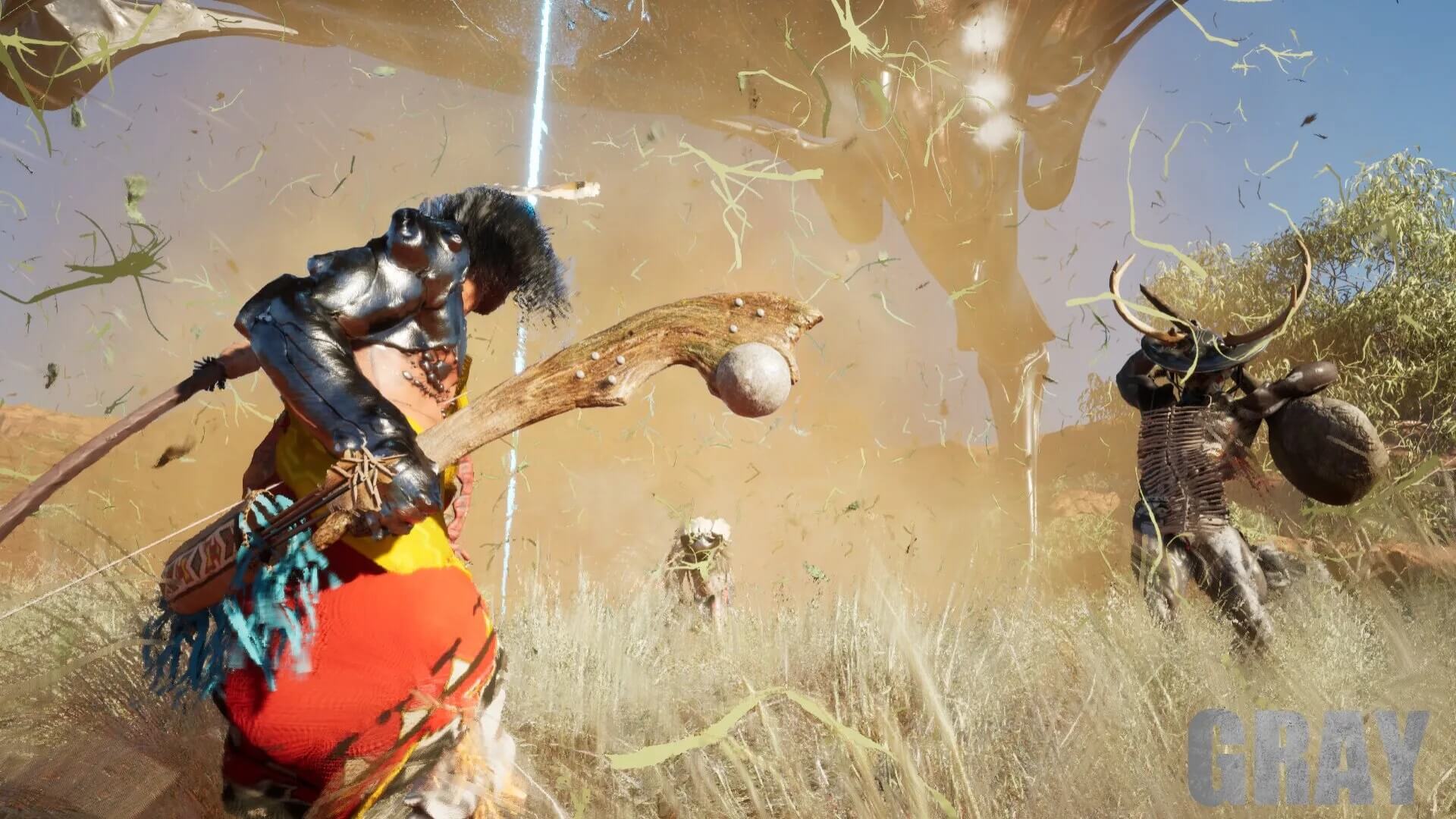 Project Gray’s moment-to-moment gameplay will most likely entail carrying out tasks across the open world with an intent of gradually thinning the enemy resistance bit by bit. In-D hasn’t shown much of how the open-world would be like, but it seems fair to assume that it will feature multiple biomes and open spaces with settlements and other points of interests peppered throughout the map. Our player character has numerous gifts bestowed upon him by the aliens, which range from a sort of grappling hook to kinesis abilities and many more. All of this combined should make for a great traversal system that neatly integrates climbing and parkour elements like Assassin’s Creed.

Another important pillar of the experience is going to be the combat system, which looks rather simplistic but seems to work well within the context of the game. A gameplay demo showcases the player character duking it out against alien soldiers as he dodges and blocks their attacks with a shield and quickly follows up with a swift strike from his seemingly primitive makeshift weapon. The combat itself is fast-paced, but it doesn’t compromise on the character weight and feedback systems to achieve that sense of pace. It’s looking to be a pretty methodical system of dodges and slashes which is reminiscent of Soulslikes in some ways.

Of course, each enemy type will require a slightly different approach to defeat. For instance, enemies wielding heavier weapons are going to have some unblockable attacks which would require careful dodging and following up with your own flurry of strikes to take them down. 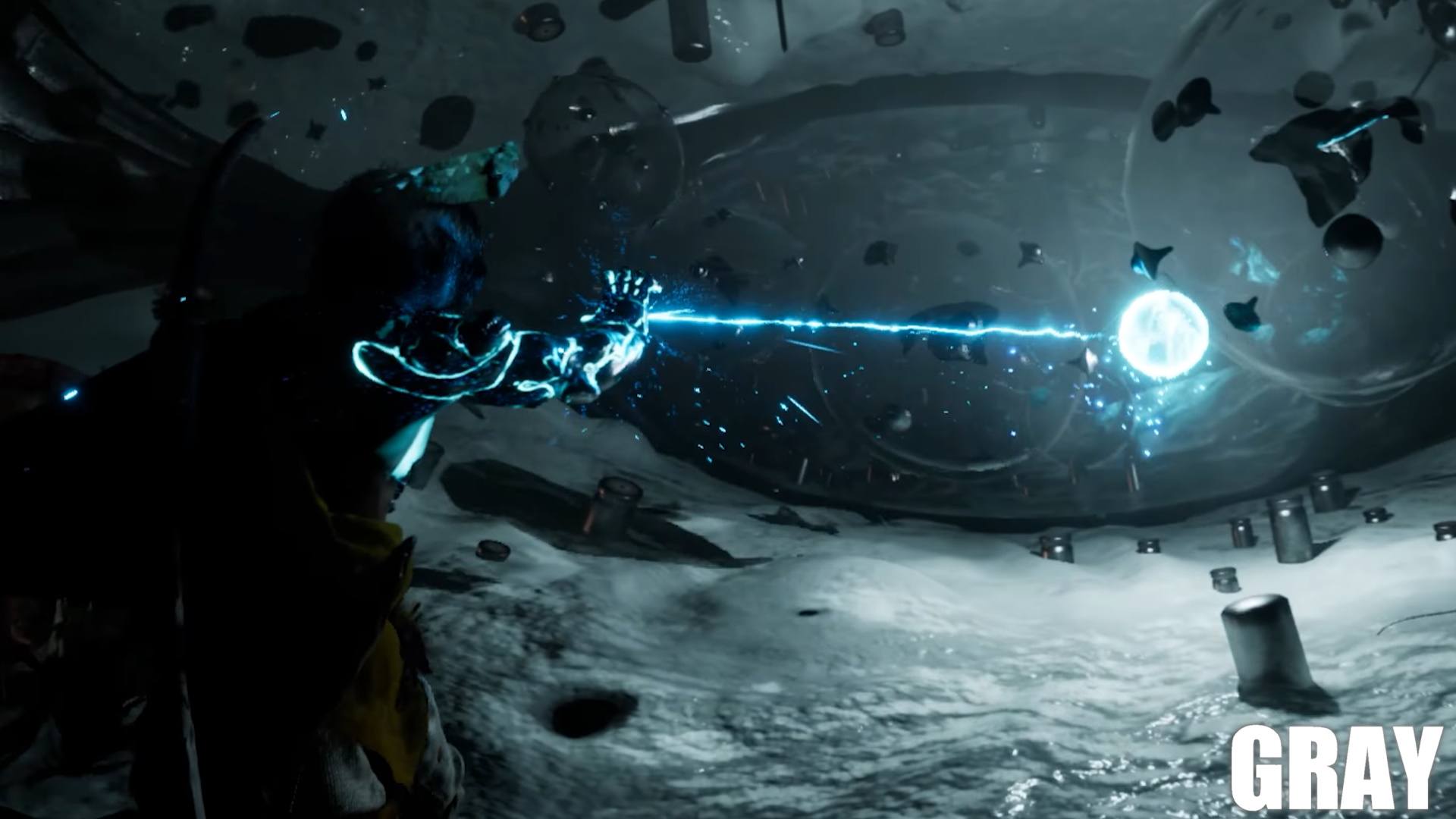 Furthermore, players will also have the option to use powers like kinesis and charged strikes during combat to have an edge over your technically advanced adversaries. We saw this during the boss fight on the top of the structure, where the player character uses kinesis to break the shield on the boss and then follow up with attacks when he is down.

Between exploring the open-world and taking part in fights, there are most likely going to be other distractions as well such as hunting, fishing, or scavenging for other resources to craft higher level gear and weapons. Furthermore, there’s a high likelihood that progression would be done through skill trees and crafting systems. After all, no open-world game is complete without a few side-activities to increase gameplay variety and incentivize exploration. But an important point to note here is that the developer hasn’t confirmed anything along these lines yet, so it’s best to keep expectations in check in this regard.

And we’d be remiss if we didn’t talk about the visual presentation. Project Gray looks absolutely gorgeous, and even more so when you consider that this has been achieved by a single person. The facial textures and environments are all photorealistic, and the game’s art direction is also stunning in a similar vein. Furthermore, the developer has also added neat embellishments such as depth of field as well as other smaller effects like individual blades of grass swaying with every strike of the weapon. While In-D hasn’t specified which engine it is using, we have a strong suspicion that it is using Unreal Engine 5 since it’s the only engine that features such cutting-edge technologies and is publicly available for anyone to use in their projects. 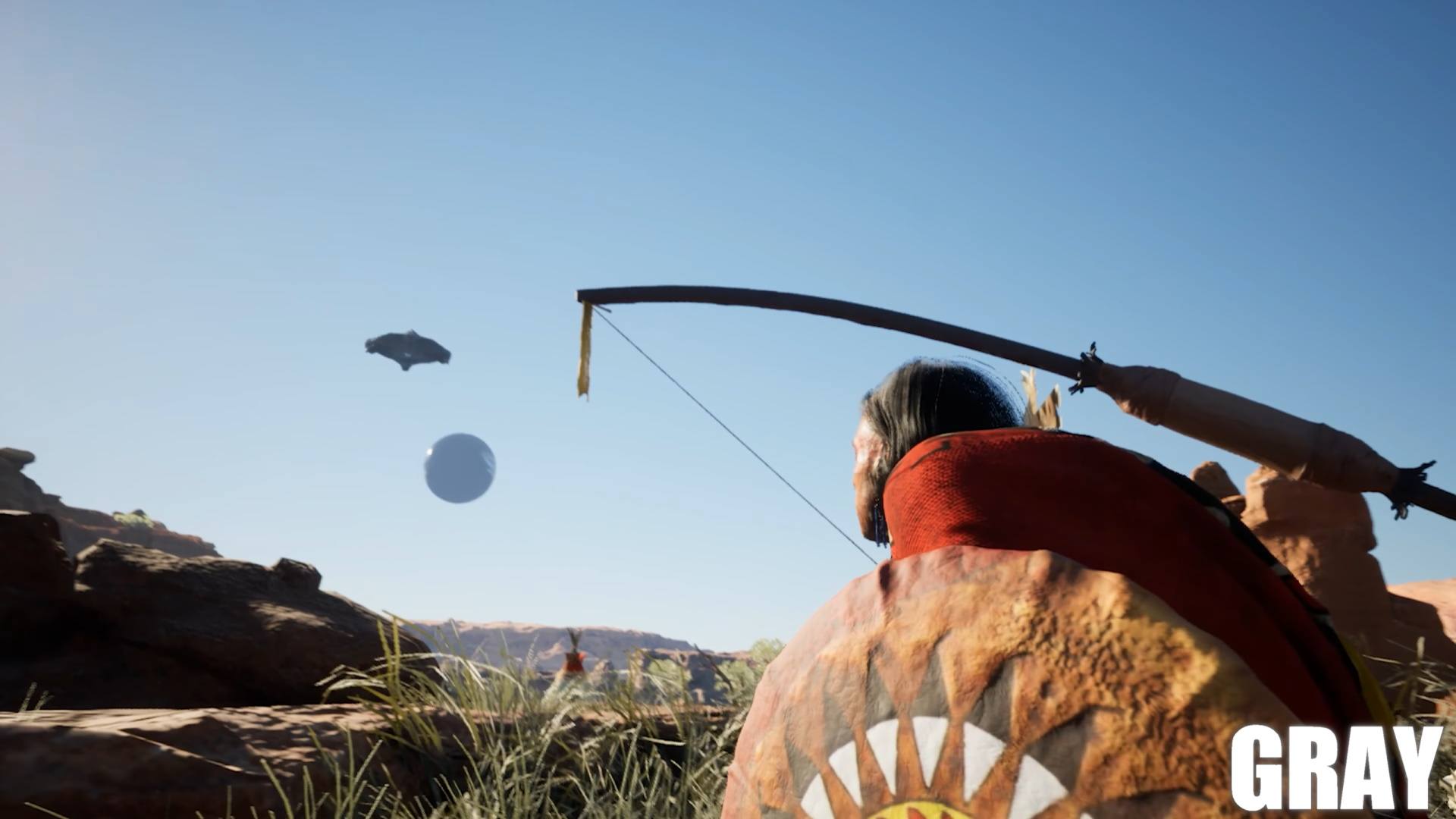 Finally, there’s the topic of release. Considering the fact that Project Gray doesn’t even have a proper name as of yet, the game is obviously a long way from release. We also don’t know how the open-world is going to function, and what kind of activities players will be able to do during their stay on the planet of Asirma. It’s pretty clear that In-D is still in the very early stages of development, and the 16-minute gameplay demo is basically a small slice meant to entice developers into joining the project.

Without a doubt, Project Gray is an ambitious title and juggling different elements of game development like art, physics, story, and game design isn’t really feasible for a single person. As such, the studio is likely going to hire a few more developers to complete the project and hopefully, get some strong publisher backing as well to help on the financial front. So fans shouldn’t be expecting to play through the game anytime soon.

All that said, there’s no denying that Project Gray is looking like a really promising game. The core gameplay loop, the world building, and the visuals are all looking really gorgeous – and the game could very well end up being much bigger than anyone might anticipate. In-D has something really great on their hands, and if it manages to deliver on its promises – it could end up being one of the biggest games of the near future. And we really hope it ends up being just that, and then some more.