Miguel Oliveria’s dark puzzle platformer presents an altogether different experience from anything on the market.

The OUYA may be considered one of the biggest failures of last year, considering the utter hype and enthusiasm it’s Kickstarter funding campaign received. Granted, it was never going to compete with the PS4 and Xbox One, but the Android console’s current status is a far cry from what it was before release. That doesn’t mean it isn’t home to some interesting games though. Thralled, Miguel Oliviera’s dark tale of slavery and survival, is one of them. How many games have you playing as a runaway slave trying to protect her child against the world.

Thralled couldn’t have been possible without the support of the OUYA team. In exchanged for exclusivity, creative director Oliveria is receiving support to help finish the game. If this is what it takes to deliver the experience, then it could only mean better things for the OUYA. GamingBolt spoke to Oliveira about Thralled and the current state of the OUYA. We also had a chance to learn about the importance of sound in the game and how the gameplay works.

Rashid Sayed: Can you please tell us a bit about yourself and your company?

Miguel Oliveira: Sure! My name is Miguel Oliveira, and I’m Thralled’s team lead. I was born and raised in Portugal, and came to the United States four years ago to attend the University of Southern California’s Interactive Entertainment program, from which I graduated almost a year ago now.

Thralled was born as a class project at USC, and was originally produced by a team of students.
Our current team is composed of two artists, two programmers, one animator, one composer, and one sound designer. Needless to say, they are awesome people to work with! We come from a wide variety of backgrounds, but we all share a common passion for interactive experiences and the belief in the artistic potential of this medium.

Rashid Sayed: Thralled features a pretty dark storyline. What was the inspiration behind the same?

Miguel Oliveira: The idea behind Thralled was born out the necessity to discuss the topic of slavery and its toll on human life. Beyond the amount of suffering caused to its most direct victims, the transatlantic slave trade had long-stretching repercussions that can still be felt today – Issues like racism against those of African descent originated out of the discrimination that the widespread system of human trafficking during the colonial era necessitated; slavery itself, as an institution, is very much alive as well, with roughly 30 million people enslaved today. It is a topic we must discuss, and we feel that using interactive media to do so is a completely viable way to go about it. 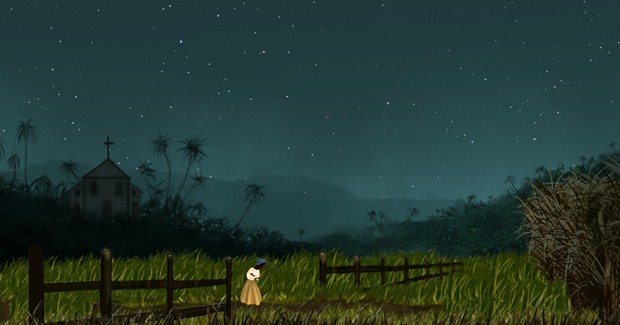 "Music plays a key role in Thralled, as it is one the main drivers of immersion. Music is used as a way to express the character’s feelings and persona; we are careful to limit ourselves to a set of sounds indicative of Thralled’s setting and main character’s cultural experiences, to indicate that everything is heard and seen from the perspective of the character."

Rashid Sayed: Tell us a bit about the gameplay mechanics. From the teaser trailer it seems to be a puzzle oriented game or is there more to it?

Miguel Oliveira: It is mostly puzzle orientated, in the same way that an experience like Limbo would be. However, because Thralled revolves around the story of a runaway slave under constant pressure, puzzles often have a time-limit constraint and have to be solved through quick judgement – Imagine something like the spider chasing you in Limbo, but much more often (check out answer #7 for specific details).

Rashid Sayed: Thralled features a woman who has been put into slavery and to make matters worse , her child has disappeared. There is a lot of emotional tension here and depicting this situation of mother and child relation is going to be challenging. What kind of design decisions have you taken so the player gets emotionally affected by what is happening in the story?

Miguel Oliveira: Since the story is primarily about the relationship between the main character and her child, we chose to put focus on that relationship on all aspects of the experience. The first thing we took into consideration is that the audience must care about the baby if they are to be emotionally affected by its absence.

As such, we include the baby in the 1st chapter to introduce the relationship between mother and child and place this relationship at the center of the plot. We characterize the baby as a likeable character, one to care for, both emotionally and in gameplay terms. The audience grows to like the baby, care for him; when we take him away, and when the objective shifts to be about finding him, the players will ideally be already emotionally invested in the experience and relate to the mother’s worrying about the child.

Rashid Sayed: Music is a big part in any video game product but even more so in an indie game. How do you plan to use the sound as one of the mechanics that will influence the gameplay?

Miguel Oliveira: Music plays a key role in Thralled, as it is one the main drivers of immersion. Music is used as a way to express the character’s feelings and persona; we are careful to limit ourselves to a set of sounds indicative of Thralled’s setting and main character’s cultural experiences, to indicate that everything is heard and seen from the perspective of the character.

Music and sound play a big role in terms of gameplay itself as well – For instance, the audience will know that the baby is in danger when he cries; the intensity of those cries, as well as the music, increases over time, indicating how much time one has to save the baby in certain situations (check out answer #7 for more details).

Rashid Sayed: What can you tell us about the character development in the game? Are there going to people that Isaura is going to meet? What kind of interactivity will the player have with them?

Miguel Oliveira: At the moment, I can say that the experience revolves completely around the development of the two main characters (Isaura and the baby) and there will be very few characters beyond these two.

Rashid Sayed: What kind of challenges will Isaura face in her journey?

Miguel Oliveira: The initial objective is to help Isaura (who starts out with the baby in her arms) escape through the Brazilian forest; putting it simply, help her go from point A to point B in a 2D dimension. She will face natural obstacles in the environment along the way – tall ledges, which Isaura would need both hands to climb through, would be an example – and will need to free her hands by putting the baby down in a safe spot, to figure out a way around these obstacles.

When Isaura steps away from the baby, however, the baby starts crying; the sound of the cries alerts this ominous figure who walks slowly toward the baby, and who will take the baby away unless Isaura comes back for him on time and embraces him so he stops crying. This is the basic dynamic of the 1st chapter of Thralled – After the 1st chapter, things change a little bit. 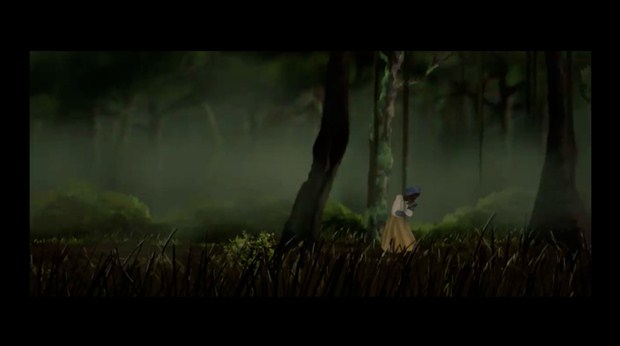 "As a recent college graduate, I simply wouldn’t have the means to gather a team to finish Thralled and sustain myself and others at the same time. In other words, I wouldn’t be able to finance Thralled’s completion without Ouya’s aid."

Rashid Sayed: Given that Ouya hasn’t been able to penetrate the core market, what was the reason behind making it exclusive to the console?

Miguel Oliveira: Thralled wouldn’t be possible without Ouya’s support, really. They were kind enough to offer financial aid in exchange for exclusivity on the console,so the first reason why we’re making it exclusive is because the folks at Ouya believe in the project, and that is invaluable to us. The second is that, without their support, we wouldn’t be able to finish the project – As a recent college graduate, I simply wouldn’t have the means to gather a team to finish Thralled and sustain myself and others at the same time. In other words, I wouldn’t be able to finance Thralled’s completion without Ouya’s aid.

Rashid Sayed: Indie gaming has gone mainstream with the emergence of PS4 and the Xbox One. Was there a specific reason why Thralled is not on those new consoles? Plus you would want to put your games on as many platforms as possible, right?

Miguel Oliveira: Ouya exclusivity is what we agreed on in exchange for their support.

Rashid Sayed: As someone who is working exclusively on Ouya, what is the one thing that the console has when compared to next gen consoles?

Miguel Oliveira: I can note a few things. First of all, it places a devoted bet on introspective experiences that focus on serious topics with real-life implications, and that are set to explore the depths of the human condition in ways that this medium has never done before; experiences that Ouya is investing in like That Dragon, Cancer, Neverending Nightmares, and Silent Enemy, are ones that focus on vulnerability, on love, on the stuff that really makes us human. These experiences are bound to offer us a glimpse of the stuff that makes us what we are – This is what art is to me, and what I personally love.

Beyond that, Ouya also heavily invests in products that bring people together – “Multiplayer couch gaming” experiences that encourage people to sit by each other and have a shared experience, to laugh and have fun with one another.
There is also the obvious subject of pricing – The Ouya’s makes it accessible to all audiences. Next-gen consoles are great and I love them, but they are too expensive for some people, and I believe that this medium should be barred to no one.

Rashid Sayed: Roughly speaking, how many hours of gameplay are we looking at in Thralled?

Miguel Oliveira: It will be a somewhat short experience, lasting between one and a half to two hours.

Rashid Sayed: Have you guys set a release date?

Miguel Oliveira: We’re planning to release during the Fall of this year!

Miguel Oliveira: For more information about Thralled, check out our website at http://www.thralled.org – You can also sign up for the newsletter there to receive regular updates on its development!