This years versions of the well know franchise of the Tiger Woods PGA games is in no way a disappointment nor the same game as last years with a few touch ups.  It has some significant changes with maybe with one of the biggest ones in some peoples eyes that it is the Masters.  Your chance to dawn the green jacket that is every golfers dream.  Also I have had the opportunity to play the game with the Playstation Move and on the Xbox 360 impressed by both consoles.  The game begins with you reliving a moment that changed to history of golf as you find yourself as Tiger Woods on the last hole of the Masters only to win the idolized Green Jacket.  From then on the game really takes off with your standard PGA game with new additions and much more. 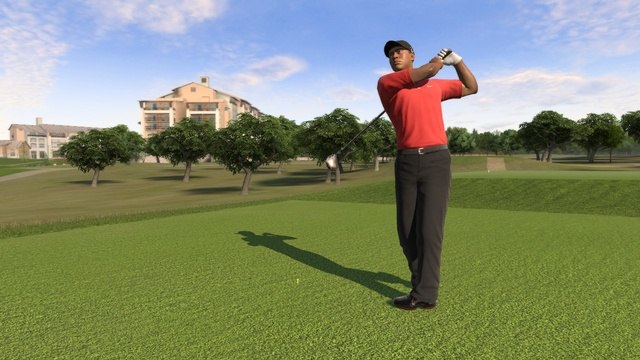 The Star, The Man, Mr.Tiger Woods

The graphics in the game are extremely impressive from the courses to the characters modules.  Even the grass in in 3D, that right… the grass, of course provided you have a 3D television.  The motion of the golfers swings are very life like.  The game supports 720p, 1080p and 1080i for full HD support.  New commentary is done by Jim Nantz and David Feherty as new additions to the game.  The sound and music of the game suits it well while partially soothing but not to sappy to give PGA 12 the right mood.  The main goal of the game is to make you way to the Masters in Augusta and win the championship to walk away with your very own Green Jacket however that is far from all the game holds.

Right off the bat you can create your own golfer giving him your personal specifications from what clubs he will use, to his clothing to his face in which you can you a face that is already in the game and alter it if you wish.  Beyond that you can even use the Kinect Sensor or the Xbox Live Vision Camera to take a picture of you face to superimpose your face on to you golfer.  You can also create more that one golfer but are limited to four slots.  You eventually gain points as you play games that you can spend, adding to your golfers attributes.  There is also a pro shop where you can purchase and equip different clubs, gloves and other apparel.

Your caddy is also now you best friend or at least he seems to think so.  He will set up shots for you giving you options and helping you understand shot layouts as well as helping choose the best method of approach.  He will have you last name plastered on his back so in the end.. he’s your bitch, but a well trained one.  Now the main portion of the game is to compete and win the Masters.  During the Masters you can see sponsors you have gained or wish to gain, view the pro shop and view your career from a stand still.  Now aside from the big Masters event there is also a Quick Play menu where you can simply play a game of golf or just a hole for that matter.  You can also invite friends to play the demo and you will gain 25XP toward your golfer for every friend you invite to play the demo.  There is also a ‘Tiger at the Masters’ mode which put you in the shoes of Tiger Woods requiring you to relive and play the Masters Championships he won exactly the way he did.  The ‘Inside Augusta’ mode you can play the course while Tiger show you the ins and out of the course to learn to master it as he did.  Then there is the ‘Presidents Cup’ which is a series of matches between the USA and an International Team representing the rest of the world. 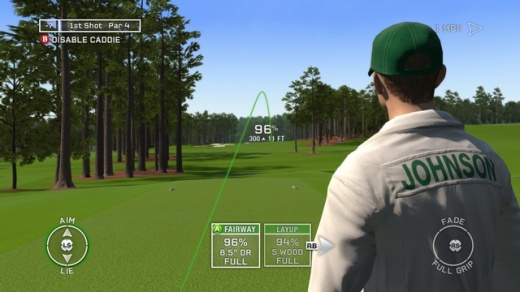 In addition to all the different types of gameplay the game has videos, the USGA rules, an interactive manual, surveys, access to the EASPORTS.com statistics (news, feedback, etc.) as well as an additional 19 courses you can purchase for download.  You can also listen to all the different musical tracks in the game.  Now the fun certainly does not end there as the online element of the game is endless.  You can participate in Live Tournaments from the 2011 Masters, to Historic Matters, Daily/Weekly Tournaments and Tiers as well as a Play the Pros Tournament.  You can save clips of impressive plays online with the EA Sports GAMERNET with challenges in the clip recorder it self.  Of course there is a matchmaking system that is extensive enough to let you play a friend to specify your own session down to the ‘T’… no pun intended.  There is also an online Lobby where you can choose to play according to Game Mode, Skill Level, Difficulty or Team Play.  Lastly you may of course view you online statistics as well as party up will multiple friends.

Playstation 3 Move:
Tiger Woods PGA Tour 12 is PS Move compatible and is extremely life like.  When I say this I don’t mean that it just functions well in conjunction with the game, I mean it is nearly exactly how you would move your arms and wrists in real life while golfing.  Driving is not the best example but when it comes to putting you may literally need to move your wrist half of an inch to sink that ball in the whole.  This is something entirely new when it comes to the golfing game genre leaving actual golfers the ability to practice the game efficiently while games may learn how to golf properly.

Tiger Woods PGa Tour 12 is by far the best game of the franchise yet and anyone who remotely would enjoy a gold game, real or not, you will enjoy this game.  The game is a step up from its predecessors and really proves to have evolved with the times.  The amount of content in the game is amazing, being packing to the brim with content between online and offline.  Not to mention an additional 19 courses are currently available, but they are not cheap, so I would assume they are good.  You can not go wrong with this game and is certainly worth a purchase and for those looking to add  the utmost realism to their game, they might want to consider it on the Playstation 3 with the PS Move.

Many, many different modes to play with online capabilities and plenty of customization. Extremely life like especially when using the PS Move.

You need a code to play online which is attained by purchasing the game new. If you don't like golf, that your not going to like this game.

Final Verdict:
EDITOR’S CHOICE
The ultimate tournament, the Masters, will give you a chance to dawn the green jacket as you make your way to the top with plenty more in the game to delve into.
A copy of this game was provided by Developer/Publisher/Distributor/PR Agency for review purposes. Click here to know more about our Reviews Policy.