Tiger Woods has had a bumpy ride these past few years. Its starring athlete has been caught in a controversial storm, and his private and public lives have both been under intense scrutiny, as the athlete has found himself reduced from being a role model to somewhat of a laughing stock. And yet, EA Sports has, perhaps admirably, decided to stick with the guy against all odds, continuing with their Tiger Woods line of annual golf games.

The games themselves have suffered a bit somewhat in recent years. Every sports game franchise, structured as it is around the model of annual releases, faces the same fundamental question- how can the next annual installment iterate and change just enough that players will find it exciting enough and will be willing to splurge the cash for a fresh installment? And yet, given the rigid development cycles, developers are also forced to reuse assets and engines. How do they balance these two opposing factors?

Some franchises, like Sony’s MLB and EA’s very own FIFA, handle this admirably well. Tiger Woods, as already mentioned, hasn’t been doing all that good of a job lately. And while Tiger Woods PGA Tour 12 was a good, if flawed game, this year’s installment is a well meaning effort stumbles entirely in its execution, leaving us with a game that is slightly unsatisfactory.

Last year’s game was notable for adding some much awaited content, such as the Augusta National tournament, to the series. This year’s installment, however, takes a different approach, eschewing the addition of new game modes in favor of completely revamping the mechanics. This doesn’t mean there aren’t any new game modes- there are, including one that literally lets you play as Tiger Woods from his childhood and all through his adult career- but all of them pale in comparison to the tweaking that the game’s mechanics have gotten. 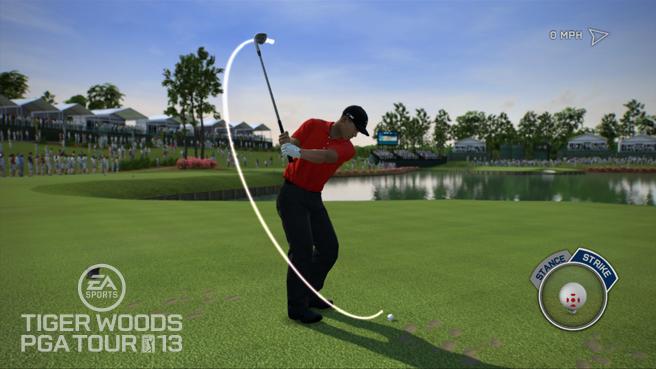 EA bills the Tiger Woods games as ‘the authentic golf simulators.’ The new controls and mechanics certainly go a long way towards justifying that claim, that is to be said for sure. Whereas they take away from the somewhat streamlined nature of the previous games, and threaten to become all to overwhelming most of the times, they also end up relinquishing a lot of control directly to the player, so that, theoretically, if the player manages to master the controls, he or she can and will have more control over his or her shots than was possible in the previous games.

The left analog stick now completely determines control over your shot, and the game does an admirable job of keeping up with your analog stick movements to appropriately simulate a shot that goes near or far depending on how hard you hit it. The backswing is controlled by pulling the stick back, the follow through is simulated by pushing the stick forward, and both of these movements have to be coordinated perfectly in conjunction with one another to land the perfect shot. You can’t underswing in the backswing and follow it through by jamming your stick forward. It won’t work that way. And like in previous years, the game demands that you keep your course and its quirks in account, although it does throw a bit too many variables at you compared to previous installments.

All in all, however, all of it comes together beautifully to create a stunning, thrilling, authentic golfing experience, mechanically speaking. Where, then, is the issue?

The problem arises from this game’s assumption that you know every single one of its intricacies, and its subsequent failure to communicate all of its mechanics to you. The game encourages the player to experiment, and learn entirely by trial and error, but this can get incredibly frustrating, for multiple reasons: for people familiar with past installments, it’s like having the rug drawn from under them, without any explanation as to why; the mechanics have changed, yes, but what are the new ones in place? Why won’t the game actually lay them out? 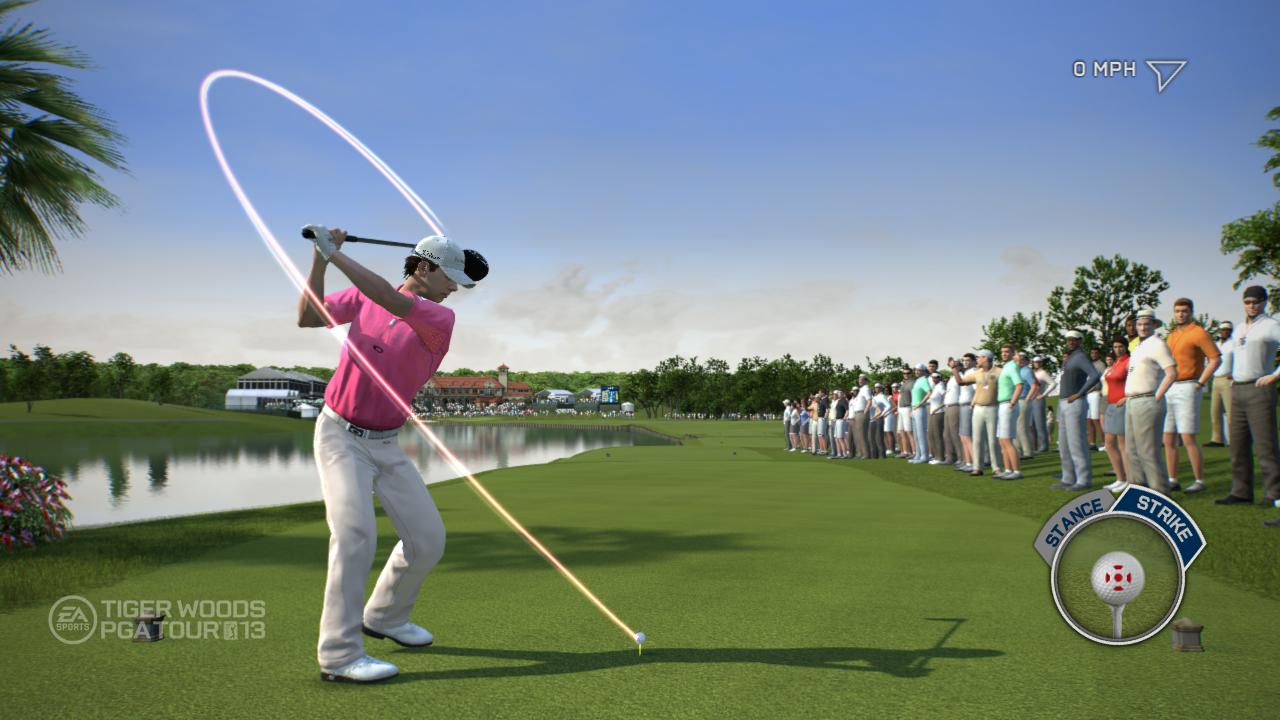 For people who haven’t played any of the previous games, and pick this one up as their entry to the franchise, this game will be a nightmare. The controls are esoteric for someone unaccustomed to golf games, and even after learning them, mastering them, with all their intricacies that apply to specific situations, depending upon so many variable factors, will take ages, and this is all stuff that the game does not clarify. To be fair, there is some standard text in the game that gives the general idea of where to go, but like I said above, the game encourages experimentation, and for a newcomer, this will probably be so frustrating that he or she will give up on the game.

And finally, there will be golf players who might decide to look into this game. While the mechanics might make perfect sense to them once they got the hang of them, and might seem like the most natural and intuitive way of recreating the golf experience on the console, the fact that they probably will have no clue as to what the mechanics are to begin with- you see, they might be intuitive, but they are not immediately obvious- will quite frustrate and alienate them, I imagine.

Of course, you can choose to get around the entire farce of joypad controls entirely, by opting for Move controls. Like last year’s game, Tiger Woods 13 offers support for Sony’s criminally overlooked motion control accessory, and unlike last year, where its implementation seemed half hearted, this year, it knocks the ball out of the park (or off the course, in this case, I assume) with pitch perfect controls that give you complete and intuitive control over your swings. Seriously, with Move, this is the authentic golf simulator experience.

What about the new mode? There is one, that lets you play as Tiger Woods in his childhood, and all the way through to his adult career, but it’s kind of a meaningless addition, and honestly, the mode just isn’t fun. It involves the sports game equivalent of lots of backtracking- failing any objective means restarting, and it gets tedious- although I suppose that this mode is a good way to get yourself acquainted with the new mechanics and controls (since the game makes more of an effort to acclimatize you with them in this mode). But honestly, overall, it’s a poorly structured, poorly paced mode, that really adds nothing meaningful to the game, from a gameplay or structural perspective.

One thing that might end up annoying many players is the fact that, this being an EA game, and more importantly, an EA Sports game, it seems to have been specifically designed to sell as much DLC to you as possible. And whereas there is a healthy amount of content in the core game, so that the actual product itself never feels compromised, the game adopts an almost Free to Play mentality, where some crucial skills that would put you at an advantage are offered either via DLC, or in game- except earning them in game requires such a massive time investment that you might as well just go ahead and buy the DLC.

One minor annoyance is the Country Club mode, which is an excellent addition to the game that simulates the club structure of real world golf via online club lobbies, is DLC exclusive. This would be one of the times where you would curse EA for holding back content and selling it to gamers post facto. 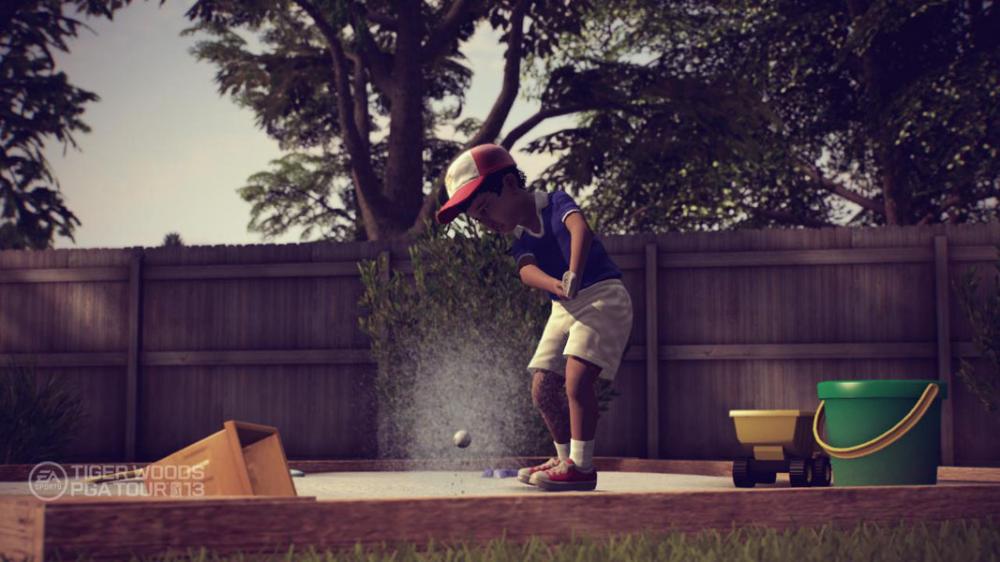 But that’s about it, really. Tiger Woods 13 is a good game. It looks good, it sounds good, it controls good, it has a healthy amount of content. It has its heart in the right place, and it strives to deliver the elusive authentic golf experience. Where the game stumbles is in its execution of its ambition.

Whether you buy the game or not depends entirely on if you think the new controls are worth the price of the upgrade over last year’s installment, because the new modes definitely aren’t. As for newcomers to the series, whereas Tiger Woods 13 definitely is the best game mechanically, I would still suggest that you play one of the older games in the series to acquaint yourself with the controls and such somewhat before you venture into PGA 13. Otherwise, you’ll find yourself unnecessarily frustrated.

This game was reviewed on the Playstation 3

Once you get a hang of them, the controls are perfect; Move support is great; Country Club Mode is a neat addition

The game fails at explaining its new mechanics to the player adequately; Tiger Legacy mode is entirely meaningless; the game's focus on DLC can be off putting; game can get overwhelming

Final Verdict:
GOOD
Tiger Woods PGA Tour 13 is a game that has its heart in the right place, but one that perhaps becomes a victim of its own ambition.
A copy of this game was provided by Developer/Publisher/Distributor/PR Agency for review purposes. Click here to know more about our Reviews Policy.