Come for the giant hulking Titans, stay for the multiplayer experience of 2014.

The best games of our time – or any time – are defined by the moments. That first encounter with the Berserker; the manic rush of Surface Tension; the introduction to City 17; exploring Hyrule in 3D for the first time; surviving and protecting Ellie from the harshness of the world – it’s the moments that serve to define our games, even as the games themselves fade into memory. It’s almost odd to think that a multiplayer game like Respawn Entertainment’s Titanfall could be the prime source of moments in this generation of first person shooters. We’ve almost seen it all. We’ve done it all. Is there anything left?

As Titanfall proves in its harrowing multiplayer matches, there indeed is.

"Regardless, the focus of the game isn’t on the campaign. It’s about knowing who you are, knowing how you’d approach situations, and outsmarting your opponents in the process."

Titanfall follows the story of the IMC and Militia, two factions at war in the Frontier. The main plot centres on former IMC pilot James McCallan seeking to bring down the IMC in the Frontier and in the process, butting heads with IMC Vice Admiral Graves. The campaign sees six players assuming one side as they do battle against six players on the opposing side. Audio logs, pre-match cinematics and short picture-in-picture clips during missions help progress the story but there’s never any real feeling of character or plot development.

On the one hand, this allows for players to immerse themselves in the game’s mechanics and maps before freeform multiplayer. On the other hand, some elements feel like they could have used a bit more exposition. What is Sara’s motivation? What exactly happened to McCallan to have him rebel? When you encounter various creatures and technologies, including the Titans themselves, you can’t help but want to know more.

Regardless, the focus of the game isn’t on the campaign. It’s about knowing who you are, knowing how you’d approach situations, and outsmarting your opponents in the process.

The movement system is perhaps Titanfall’s biggest triumph, equipping you with a jetpack that lets you wall run, double jump and scale rooftops effortlessly. Most players will be motivated to run and gun on the ground in the beginning but the real magic happens when you choose to wall run and traverse levels quickly. 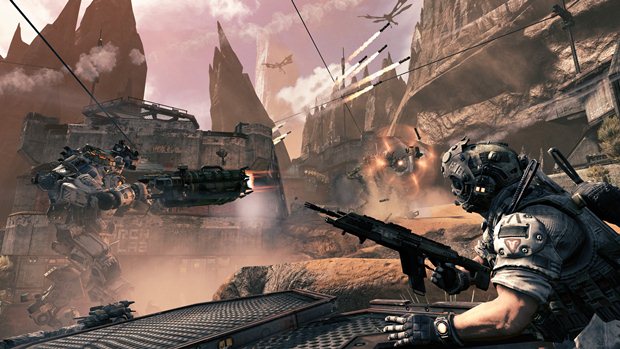 "The Titans themselves are walking machines of war but they’re by no means invincible – a duo of Titans can easily pick you apart if you’re not careful."

You’ll be able to choose from three standard load outs in the beginning but as you level up, you’ll be able to customize your own skill set and tactical abilities. Do you opt for the run-and-gun approach of the C.A.R. SMG, combined with Deadman’s Trigger to activate Satchel Charges on your death? Do you choose the Smart Pistol and hang off of walls cloaked in order to surprise enemies? Do you parkour to the tallest spot on the map and proceed to snipe enemies from it?

When you mix in AI Grunts and Titans, the possibilities for tactics only become ever more complex. You can hack Spectres to fight for you, but even the typical Grunts will provide enough cover fodder to effectively kill opposing Pilots while they’re distracted. The Titans themselves are walking machines of war but they’re by no means invincible – a duo of Titans can easily pick you apart if you’re not careful.

In modes like Attrition, wherein you must gather a certain point total to win, it’s not usually necessary to tackle Titans head-on. You can spend the entire match playing “keep away” while stomping on Grunts and Spectres, not to mention other Pilots, to build up your score. In Hardpoint Domination, where you must capture and hold three locations for points, you can keep your Titan in Guard or Follow mode, using it to either tackle hostile Pilots or alert you to their presence. 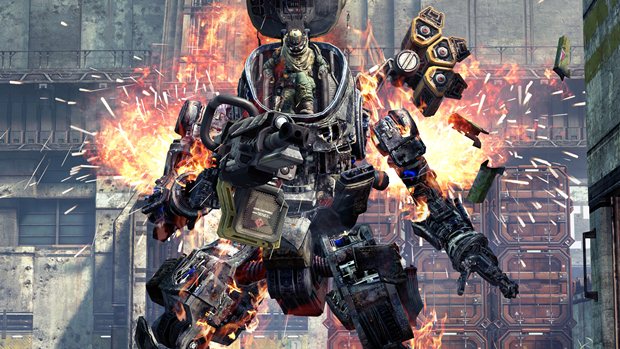 "What’s most amazing about Titanfall isn’t its deceptive depth but how easy it is for everyone to find a role in the game. You don’t have to be the best shooter or the highest ranked player to stand a chance."

There are three types of Titans in the game: The hulking Ogre, the speedy Strider and the all-rounder Atlas. Neither type is inherently superior to the other – it all depends on the kind of player you want to be. Some maps are better suited to certain types – the open fields of Fracture benefit Striders more while the narrow streets of Angel City can either make it easier to flank enemy Titans or difficult to reach them, as your army travels down the straight and narrow paths.

Pilots aren’t necessarily defenseless against Titans. You can rodeo on the back of the hulking beasts and shoot ‘em up, or lay down Satchel Charges for when the Pilot emerges to deal with you. Just don’t try and jump on Titans from the front if you don’t want to be crushed. You also have anti-Titan weapons like the MAG Launcher and Charge Rifle which are supremely useful against Spectres and Pilots as well.

Factor in Burn Cards – disposable Perks which last for a single life but offer you an incredible advantage in the form of stronger Tactical Abilities, amped weapons, replacement Titans and double XP – and the possibilities are nearly endless.

What’s most amazing about Titanfall isn’t its deceptive depth but how easy it is for everyone to find a role in the game. You don’t have to be the best shooter or the highest ranked player to stand a chance – Titanfall encourages team work and rewards you for playing smart. It’s here where your unforgettable moments are crafted. 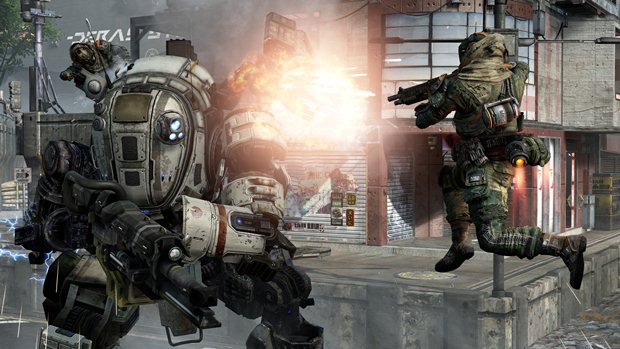 "Even if you aren’t a die-hard multiplayer fan, especially with regards to first person shooters, Titanfall is an experience you won’t want to miss."

Whether it’s killing three unsuspecting Pilots clumped together using the Smart Pistol, running around a narrow walkway to eliminate five Titans with a MAG launcher or even dooming a Titan and launching into the air with the Pilot on detonation to kill him or her as you’re falling. Titanfall’s biggest strength is in giving you the tools to get creative with your killing without unbalancing the game for everyone else.

That being said, there are a few problems. It will take some players a bit of time to get used to the parkouring mechanics and there will be plenty of instances wherein you just can’t seem to get through that open window or reach that secluded rooftop. The graphics also aren’t the best – those expecting details on the level of Battlefield 4, especially in terms of destructibility, will be a tad disappointed.

Titanfall still looks fairly amazing at 1080p and cruising at 60 FPS. The Source Engine allows it to be easily scalable across multiple platforms so even your paltry mobile GPU will be able to get in on the competition. It’s a shame that some glitches – such as the audio cutting out during excessively chaotic scenes with Cluster Missiles only to return a minute later – still persist but Respawn has delivered a successfully stable release out of the gate.

Titanfall presents itself as a coherently constructed set of ideas that play off each other amazingly well. It’s the multiplayer experience of the year and one that is continuously evolving in the minds and tactics of its players. Even if you aren’t a die-hard multiplayer fan, especially with regards to first person shooters, Titanfall is an experience you won’t want to miss.

Excellent movement and combat. Wholesome gameplay and loadout choices that are easy to understand but tough to master. Endless amount of excellent moments and battle variations. Exhilarating, intelligent and heart-stopping every time.

Graphics aren't the best. Might take some getting used to for traditional FPS fans. The occasional bug, though rare, pops up.

Life really is better with a Titan, and Titanfall demonstrates how much better the multiplayer genre can be with its fresh, compelling gameplay.

A copy of this game was provided by developer/publisher for review purposes. Click here to know more about our Reviews Policy.
Tagged With: EA, multiplayer, pc, respawn entertainment, source engine, TitanFall, Xbox One