Starting off playing TNT Racers for the Xbox Live Arcade, I was not very impressed as well as proving to be difficult to get the hang of and just win you first match.  The game is like a cheap version of Mario Kart only the power ups you get a much more destructive.  One you get the swing of thing you start unlocking new tracks and challenges upon winning races.  You can even play tracks reversed backwards if you want. TNT Racers is like an old style cartoon racer that is simple and starts you off with those cartoon like cars, while you can help but feel you have played this game before. If you get too far behind which is not hard, you simply blow up, hence the title, but then re-spawn and join the race again as a shadow racer to take revenge on remaining players. The AI in the game is actually very good so the main goal is really to take them out with power up you require.  It is real easy to fly off the track into a canyon, ram into a wall or sink into a lake which the AI never seem to fall victim to.  The AI pretty much stays on the track the whole time.  With all the hazards of the different tracks you unlock (18 total tracks), there is some nice scenery as well as a nice variety of tracks for an arcade game at least.  With the AI’s uncanny skill to stayed glued to the track no matter the mode you should try and take them out.  You can do this with the many power ups you can pick during a race.  Some of the power ups include Missile Launchers(Candy Cannons), Oil Spills, Speed Bursts, Repair Kits, Confetti Bombs, Plungers with Weights Attached to them and one of the best is an Inverter that flips the entire course among many others.

Along with tracks and challenges, you’ll also unlock other vehicles that are very creative looking while still keeping their cartoon style look as the whole game does. Round can end in seconds making some races very short and the rounds determine who will win the race, for instance not ever round must be one for you to win a race.  In single player you can choose between Challenges, Time Trial and Custom Race.  You will get to choose between car speed which is either Normal, Fast, or Turbo that must be unlock and act as difficulties.  Challenges is the main part of the game and switches between different modes from a simple race with power ups of course to Time Trails to Knock-out-mode to Score mode where collecting golds coins increases your odds of winning.  Time Trial is pretty obvious while Custom Race lets you choose all the setting and modes whether it’s Knock-Out Mode where you must destroy as many cars as possible, Time Mode, or Score mode where the highest score wins.  You can get score by collecting coins, doing jumps and of course blowing up another car. 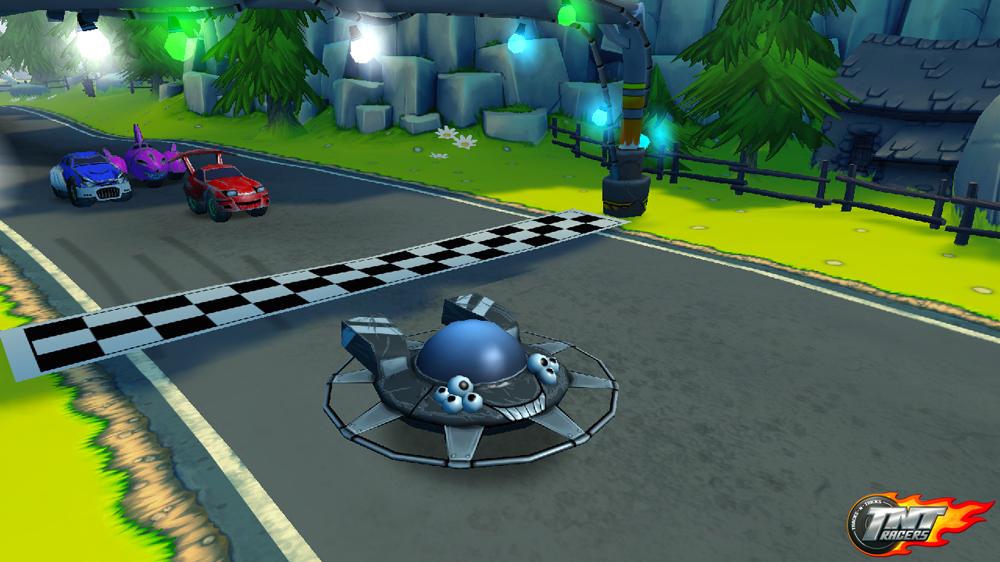 Playing online might be hard because there is not many people playing the game online, but you will find a few.  You just have to make sure you have good cars unlock or you will get smoked.  Even though the controls are overly simple as you almost never take your finger off the gas,  cars to have different pros and cons, but not by that much.  Multiplayer is always a maximum of 4 players just as single player and local multiplayer.  The local multiplayer is also a nice addition to have as well as the leaderboards.  I’m sure this game is fun on the PSP but it didn’t really have anything special about that stood out to me playing it on the Xbox 360.  It is just a kart racing game that we have seen so many like it before that I don’t think it’s worth the $10.00 however if it was $5.00 I think it would be the perfect deal if this kind of game is what you are looking for.  It is supposed also come out for Wii Ware and the PS3 this year.

Good old style soundtrack. Explosive nostalgic racer that you must have a specific taste for. 18 unlockable tracks that can be played in reverse mode. Wide variety of power ups.

Very simple racing game, that gets boring real quick. Price not quite suiting. The game feels like you have played it before at is it boils down to a standard kart racer.

Final Verdict:
MEDIOCRE
TNT Racers is an arcade racer that is out for the Xbox Arcade and PSP with plans to come to the Wii and Playstation 3. Pack with explosive power ups, being in last place just got worse when you now blow up.
A copy of this game was provided by Developer/Publisher/Distributor/PR Agency for review purposes. Click here to know more about our Reviews Policy.