You have seen apocalyptic wastelands before, but i can guarantee you have never seen one quite like this.

You have seen apocalyptic wastelands before, but i can guarantee you have never seen one quite like this. In my time with the game I witnessed: cats sporting builders hats and hanging around in gangs, gangs of dogs; their leader kitted out in what looks like something a chinese emperor would wear, and to top it off with a bit of background detail, a giant fish slapped up against the side of a building. There is no mistaking the game is Japanese, I would have loved to be a fly on the wall when the concept was pitched, you just don’t get games like this anymore, which for me makes it even more appealing and I found it the perfect antidote for genre fatigue. It is essentially a side-scroller but you can move up and down the screen as well, you can move into other sections by moving through funnels on the vertical plane, and the game also uses its verticality nicely to get access to rooftops and the like.

The humans have all gone and the streets of Tokyo are now a proving ground for various animal factions, even extinct ones. You play the game as various animals, but at the start you have a choice of 2: a Pomeranian dog who looks like butter wouldn’t melt but can drop a sheep in one lunge, or a Sika deer whose only advantage is its speed. These 2 animals might not sound very exciting to play as, but they are both actually quite fun, and if you stick at it you will eventually unlock much more formidable mammals. 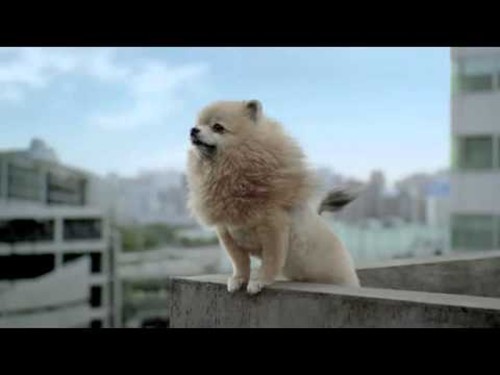 You know you wouldn’t mess with him.

There is a huge selection of animals, you unlock them by completing various challenges, and inevitably some are locked out unless you pay for them as DLC.  The tutorial is pretty lengthy and is compulsory, it teaches you the basics of the game and it is essential to learn the differences between playing as a carnivore or a herbivore. The game’s narrative and tutorial are all text-based, and the sound effects are very basic to say the least. The game seems to layer a hyperactive, and admittedly annoying drum-loop over all the action; with no option to turn it off. So your choice is to either put up with it or use your TV’s mute functionality.

When the game starts you realise how left-field the game actually is; you play survival mode first to unlock the story mode, in most games the opposite would be true. The learning curve will put some off as the game fails to explain the basics of story progression to the player, and you must therefore figure it out for yourself, personally I found this refreshing in a world of games terrified of alienating their audience.The in-game clock ticks through the years in minutes, and your Pomeranians’ breathing makes it look like he’s bopping along to the ever-present drum-loop. The time going so fast adds to the sense of urgency that is looming throughout the game. 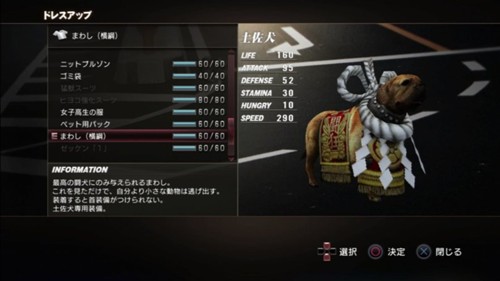 The game really is a surreal experience.

You have a hunger gauge in the top left corner of your HUD, and if this empties your health is next and you are dead. Certain areas have toxic fumes, these slowly build up a toxicity meter on the bottom right of your HUD, if this reaches 100% it will also eat into your health and again you are dead; the toxic fumes also affect the meat of you prey and the gauge will rise quicker if you eat tainted meat.  If you reach the age of 15 before you reproduce, you are dead. Everything you do must be pre-planned; want to go to a different area but plan on coming back this way? You had better leave yourself some food for the return trip.

You start life as a “rookie” and when you intake a set amount of calories you rise to “veteran” and then “boss”, thus increasing your stats. There is another reason for increasing your rank, other than the obvious statistical benefits, and that is to attract a better mate. The better quality your mate, the better stats you pass on to your offspring. Mates come in 3 categories  Prime, average and desperate – beware, for desperate bitches give you fleas and if you do contract them you will be paralyzed whilst you scratch. The first step to acquiring a mate is the claim a territory as your own, this is achieved by marking flags dotted around the area. Once the territory is occupied a choice of different grade mates appear on the map, seemingly attracted by your manly pheromones. The game does not tell you what grade they are, and I could not find a way to send them away once approached, so this can be a bit of a lottery.

Luckily the camera pulls away shortly after this scene.

Once the deed is done control passes over to your offspring and the cycle begins anew; yet this time if you die control switches to one of your siblings, until there is one left. Another advantage of having sibling is that you can use them as a distraction against a formidable enemy, by holding down triangle. The combat itself is simple fun, R1 performs instant kills against the right animal, but these can only be performed if the animal is fleeing, if you are unseen, or if you evade an incoming insta-kill and immediately counter in riposte. Evades are performed with a flick of the right stick and can be used in combat or when fleeing a big animal; doing so eats your stamina gauge so be careful. The controls take some getting used to, I personally kept flicking the right stick to control the camera, and instead jumping into the maws of an enemy.

When playing as a herbivore the game is pretty much Metal Deer Solid 3: Grass Eater. You hide in the long grass from predators, run away a lot and do everything the same but more carefully. It feels great when playing as a Sika Deer when you hide in the grass next to an unsuspecting crow, then press R1 to kick it in the face ending its life instantly. There are even a couple of sections in the Story mode where you control a Deer whilst hiding under a plastic container, this really does evoke images of MGS.

There is just something really compelling about the game, it is very addictive it’s a shame there are no “friends only” scoreboards because it is a score-based game after all. I think what makes the game feel good to play is purity of design, the game isn’t trying to appeal to everybody, it hates you and it wants you to know it. It knows it’s a weird curiosity and it wants you to embrace it, and lets face it where else can you play as a Cat and take on a Velociraptor?

Poor graphics, may be too challenging for some, permadeath, weirdness.

Final Verdict:
GOOD
You have seen apocalyptic wastelands before, but i can guarantee you have never seen one quite like this.
A copy of this game was provided by Developer/Publisher/Distributor/PR Agency for review purposes. Click here to know more about our Reviews Policy.