Too Human is a third person action RPG by acclaimed developer Silicon Knights (Eternal Darkness: Sanity’s Requiem, Legacy of Kain).  This game has been widely known for its development time and a lawsuit with Epic along with Dennis Dyack, the company’s president, voicing his opinions.  Unfortunately that has skewed people’s views and opinions about the game.  Some people won’t even give it a try.  Hey… their loss. The story takes place in Norse mythology with standby favorites Thor, Odin, Freya, and many others showing up in one way or another.

Although you play as a lesser known character named Baldur who’s past is slowly revealed throughout the story.  There is a twist to the story however.  The ancient mythology is fused with cybernetic and future technology.  While some say the combination may sound clunky, it is an extremely interesting concept.  If you think about it, it really isn’t that difficult to come up with.  Future+Past=Awesome, but the way they implement it is phenomenal.

The gameplay in Too Human is almost taking a cue from current gen sports games like the 2K Sports basketball games and Tiger Woods games by having the main combat take place on the right analog stick (actually Too Human has had the concept longer).  To attack an enemy with a melee weapon, you must simply point it in the direction of the enemy.  Of course having the right analog stick control combat, there is no manual camera control which is not a problem because 99.9% of the time, the fixed camera is always in the best possible position.  There is also gun combat in which you pull one or both of the triggers and the gun(s) is automatically locked on to the nearest enemy.  Sometimes the targeting can be a bit finicky, not targeting the correct enemy.  As an example that many people are getting annoyed with, once you kill an enemy with guns, the auto-lock will stay on the dead body.  Apparently people don’t have the patience to figure out that if you let go of the trigger for just a split second then press it down again, you will target the next enemy.  The combat is deeper than most people give it credit for with air juggles, very strong AoE attacks called ruiners, sliding, and a few others.  People might complain about the consequences of death in this game.  When you die, a Valkyrie comes down, picks you up, and carries you away. It lasts about 15 seconds and is unskippable.  Is it incredibly annoying?  At times yes when you are dying over and over.  All in all though it is not horrific by any means. 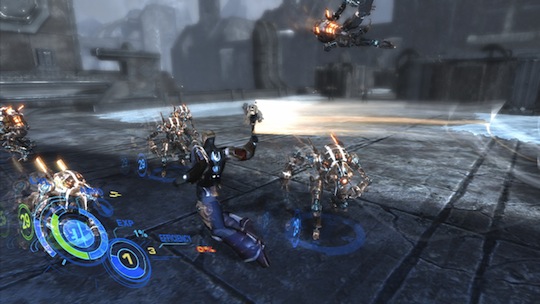 Gameplay has a satisfying flow from one enemy to another

Now as said earlier this is not just a third person action game.  This definitely has some heavy RPG elements with skill trees, skill points, weapon customization with runes, percentages, there’s loot all over the place; in short not only is the action gameplay addictive, but trying to get better and better loot gives you the “I’ll finish this room then I’m done… ok I’ll be done after this one,” syndrome.  In short, the RPG elements are implemented beautifully.

As far as graphics go, it is no MGS 4 or COD4.  Sure the character models aren’t 100% crisp, the framerate in the cutscenes can drop, and there are some clipping problems.  However artistically, the game is beautiful.  The integration of futuristic technology into ancient mythological ideas brings a very interesting fusion.  On a slightly separate note, all armor and weapons show up uniquely on your character so it is very unlikely that any two Baldurs will look alike. When it comes to the audio, Too Human is outstanding.  The music really encapsulates the epic sense of the game and the voice acting is brilliantly done.  The sound effects also all sound as they should.  However a reviewer on a big games website that will remain unnamed, complained awhile about the sound when you jump then land just sounding “wrong”.  If you are really going to nitpick a game over the landing sounds, that is going a little bit overboard.  Does it really affect your experience with the gameplay or the game itself?  Yeah I didn’t think so. 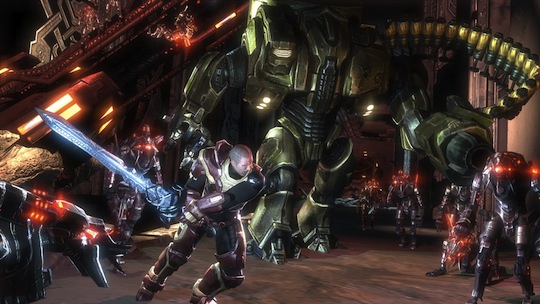 There are some big enemies in Too Human

The single-player campaign in Too Human lasts anywhere from 8-30 hours depending on how much time you take to find the secret areas on each level and tweak your equipment.  The game has five different classes, each of which can be taken down two differently aligned skill paths, along with campaign+ equals a ton of replayability. That’s not all!  There is also a two-player online co-op mode that is very fun.  You and a friend can play through the whole campaign together although this is probably my biggest criticism of the game.  It seems that Silicon Knights took a step backwards with the co-op not including any of the single-player cutscenes.  So multiplayer is basically the single-player with no cutscenes which is disappointing.  If I have an awesome game that has online co-op, I’d like to experience the whole story with my friend.  If you can get past that, this game could be on the same level of hours put in as Oblivion if you like the game enough.

Too Human is the unfortunate recipient of what I call the Duke Nukem syndrome.  This game has been announced and planned in one way or another for over a decade (development started on the Playstation 1, then moved to Gamecube, then to 360).  When a game is on hold for that long, impossible expectations accompany the game at launch.  While Too Human might not live up to some people’s expectations, it is a solid game in its own right and one that people should try out.

Co-op mode has no story elements, technically graphics are quite weak in spots, some classes built for multiplayer and not single-player, Valkyries

Final Verdict:
SUPERB
While Too Human might not live up to some people's expectations, it is a solid game in its own right and one that people should try out.
A copy of this game was provided by Developer/Publisher/Distributor/PR Agency for review purposes. Click here to know more about our Reviews Policy.