In this article we will look at some of the best RTS games made, well…ever. The RTS genre is huge. There’s a little something for everybody; whether you want to build or destroy, command epic armies or small skirmishes, conquer the world or take back that resource point. This is what makes the genre so popular- that and the fact that the mouse and keyboard work so well with it. In this feature you will hopefully find your all time favourite’s in the top spots, and will be enlightened to some games that you have never heard of.

So here they are ladies and gentlemen, the cream of the crop, crème de la crème, best of the best real time strategy games of all time!

Editor’s note: Command and Conquer 3 has been replaced by Red Alert 2 due to overwhelming demand!

Remember this game guys? Remember the Black Watch. Boy were they good. Anyway, Rise of Nations was a great game that expanded right into the modern age letting you play around with rockets and stuff, while building a base and lots of big armies. Fun!

Ah, what a beautiful game this was. This was the first RTS to feature 3D units, with ground breaking animations such as swimming and walking- all in 3D! Seriously though, units were well balanced and the AI was good. What more can you ask from a 12 year old game?

This game may not feature fully fledged all out war, but that’s not what the game is trying to achieve. This game is all about creating a thriving city out of nothing, and managing your trade, building and taxes to get there. A great city builder, with great visuals.

Racking it up at number 17, we have Dune II, the first RTS for PC (debatable to some!). Ah, Dune II, where would PC gaming be without you? This game undoubtedly deserves a place on the top twenty list, just for being the first one to do ‘it’.

Just clawing its way into number 16, we have Empire Earth 2. Yes, the first one was more original, but the sequel was a more polished (and less buggy!) playing experience. Through the game you can command one of several nations, and storm your way through the ages. Starting in caveman times, you move swiftly through the middle ages and eventually onto laser guns! There are few things more satisfying than blasting a 17th century ship of the line out of the water with laser guided missiles. You collect resources, build armies and smash bases. What’s not to like about typical RTS formula?

Now what better game to demonstrate classic RTS than Age of Empires? Just like Empire Earth, but instead only spanning the stone ages, you collect resources and build bases. However, some people played the Age of Empire games just for the fun cheats! (HINT: type bigdaddy into the console.Badass.)

Now for something a bit more modern; DefCON is a game all about killing people. More specifically, nuking people. Think chess with a thermonuclear twist. The game is all about nuking the most number of civilians in enemy countries while losing the fewest. For the peanuts you can buy it for today, it’s a worthy addition to any PC gamers collection. And if you’ve ever seen the film WarGames…well ’nuff said.

The Commandos franchise is a lesser known RTS based on the incredibly brave, dangerous and difficult missions carried out by special soldiers during World War II. There are only 10 or so missions, but each one will take you at least an hour. But you will be hitting restart a lot. A whole lot. This is one of the most frustratingly difficult games out there, but it means that when you do complete a mission,the sense of satisfaction is immense.

Wow, did this game blow me away when I first played it 5 years ago. This game has some huge battles with thousands of men all at once. It was a vast improvement over the previous two games in the series. Many gamers familiar with the Total War franchise still hold this game high as their favourite in the franchise. Graphics are good even by today’s standard, strategy was good-it was just a great game.

Homeworld was one of the first truly great space strategy games. It was in full 3D, had a mind blowing musical score and it was one hell of a deep game. Most of the space strategy games brought out recently are based on formula behind this game, and it shows. What a legendary game.

So here we are at the top ten. If the last 10 games are games that you should at least consider looking at, think of the next 9 games as ones you should definitely look in to. And as for game a la numero uno, well…just play it. Because you are missing out if you don’t.

This is a game for the hardcore only. Imagine commanding a nation in World War Two. But imagine having to command everything. Taxes.Income. Trade. Diplomacy. Subterfuge. Diplomacy. Battles. Yep, in HoI, you command just about everything you could possibly imagine about war. Prepare to lose many nights to this game, just lost in one month’s worth of diplomacy.

Yay! Large machines killing other large machines with little dudes with guns running around! Yep, that’s Supreme Commander in a nutshell. Like so many other games on this list that have just followed the book to the letter on RTS games, but done it well, Supreme Commander has earned a nice spot on our top twenty list. SupCom has other redeeming features though; the deep strategic gameplay can offer you many routes to victory, the graphics are top notch and the multiplayer is something you can lose sleep over.

8. Sins of a Solar Empire

OK, so here is 5 Star Systems, here’s a couple of wormholes and there is the enemy. Go boy, go.

Yep, you knew this old cookie would come along some time. It’s inevitable. The C&C series is one of the greatest series of RTS games of all time. Starting back in 1995, the franchise has grown off in three main directions; the original games, the Red Alert games, the Tiberian games. Each had its own little spin off, and each (with the exception of Renegade) was massively successful. There was something appealing to me about the ridiculousness of it. From the seemingly unkillable Kane, to the actual great gameplay, Red Alert 2 is one that will go down in history. You owe it to yourself to play one of the best ‘simple’ RTS games ever made.

Dawn of war II is a unique take on the RTS genre; combining elements of both strategy and role-playing to make something completetly original. There was no resource gathering as such- just the taking of important points- and your base was manoeuvrable. This game deserves your attention for its great graphics, fantastic, original gameplay and ground breaking multiplayer. Pity about the poor single player though.

Building upon the idea of quick,fast-paced gameplay, World in Conflict played like a FPS. There is not base building, no resource collecting. Just air drop your troops in and go fight the good fight. The graphics are stunning, and its almost worth buying the game just to see the tactical nuke in action. Multiplayer battles were a real forte of this game, and each one played out differently to the last, thanks to the need for strong teamwork, and class-based warfare.

7 years old and still going strong. Yep, Warcraft 3 is one hell of a game. Developed by Blizzard, this game still has map packs developed for it by the community. It was the inspiration for World of Warcraft, and by gum is it a good game. True, it is standard RTS formula, but it does it in sucha way that it will having you come back to play it again and again. The gameplay is just mind blowingly addictive.

Boy is this game huge or what. Set throughout the 18th century, you get to control a nation and lead it stomping through 100 years of history, spanning most of the world. The real time battles are also spectacular, as you can have thousands of detailed men on screen at once. It adds so many new features to the franchise such as technology trees and naval combat, that it’s a must for both veteran and beginner players alike.

Need I say more? Oh, ok then I will. CoH is a World War Two small scale RTS. There is a fantastic and lengthy campaign where mission objectives are typically of the capture and hold nature. The multiplayer is also excellent, and the graphics have aged remarkably well. Play this game. Go on, you deserve it. 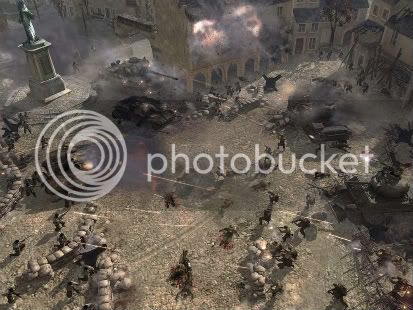 The old classic featured something that games of its time,and even modern games do not- distinct classes/races. There are 3 differenct races in Starcraft, and neither is similar in any conceivable way. The AI ispretty masterful at micromanaging, so don’t think that you will be let down by poor AI in this game. It was just a game that did everything…right. The missions were a good length, and varied. The multiplayer is fast paced and vicious. It included many features of RTS games that were unheard of in other games like waypoints. It was a fantastic game for its time, and it’s a fantastic game now.