Here are some ideas on where the Dark Knight should go after his next swan song.

Love him or hate him – and yes, ponder for a second that there are haters out there – you can’t ignore Batman, the Dark Knight and arguably DC Comics’ most famous hero ever. Bruce Wayne’s alter ego has served as the most successful comic book character of the video games industry, breaking the stigma that adaptations of heroes was impossible to do right. Batman has featured in several critically acclaimed titles in the Arkham saga, particularly in Arkham Asylum and Arkham City, and the series will see its end in Arkham Knight releasing this June.

Of course, that won’t spell the end of the Batman series by a long shot and you can bet that Warner Bros. Interactive Entertainment will look at other settings for Batman games. There’s no shortage of material to draw on out there but what are some of the coolest stories that could make for the most compelling Batman games? What are a few sagas that could to both the open world sandbox that defined the Arkham series or simply act as a straightforward adventure title?

We decided to take a look at the various stories and comics out there and chose five settings we’d like to see the series explore after Batman: Arkham Knight. Granted, they probably won’t happen (ever) but that doesn’t stop us from unreasonably dreaming. 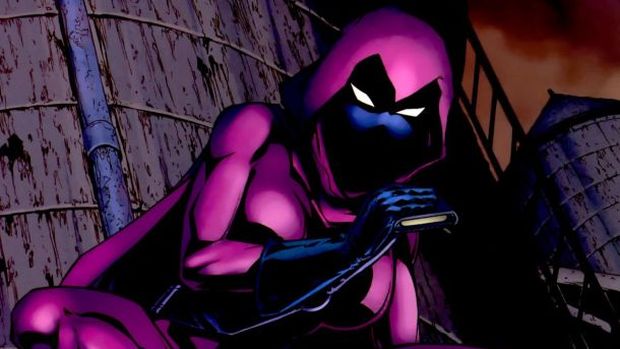 Many story arcs in the Batman franchise have long-reaching effects across the universe. War Games was one of them and if you’ve ever wondered how Black Mask (seen in Arkham Origins) successfully established himself as a crime boss, this is the arc to look at. Besides featuring the same gritty tone and potential for open world conflict – with Batman and his crew having to combat several gangs and effectively stifle a war in Gotham – War Games presented a significant moral story for the Dark Knight. We won’t spoil it here for those who haven’t read it but War Games served as a grim reminder for Batman taking on teenagers to help him fight crime.

There are some significantly awesome moments throughout War Games including Timothy Drake’s run as Robin and his attempts to hold it together as Gotham falls apart; Batman having to fend off several gangs and their leaders by himself; and eventually, the re-emerging of Jason Todd as the Red Hood (which could serve as a neat little epilogue for an expansion down the line). The story also cements Batman’s public presence, disrupting the urban legend status bestowed on him in the beginning. Players could take on multiple character roles including Catwoman, Batgirl, Batman, Robin, Nightwing and more, leading to further variety in gameplay.

The only real issue is in setting up the back stories and individual characterizations for some of the crooks. Black Mask’s sudden emergence makes sense and would help establish him as a psychopath after Arkham Origins made him out to look incompetent. However, introducing Stephanie Brown as Spoiler and eventually revealing all the different games could take some significant work. Thankfully, the war itself takes place over a few days so it wouldn’t be impossible for a competent developer to fit all these moments into a coherent storyline. 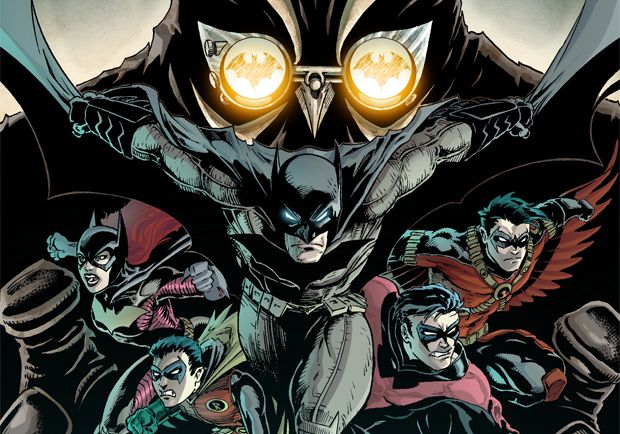 Largely considered one of the best modern Batman stories of all time, Court of Owls helped expand and reinvent the Batman mythos. Rather than trying to put a spin on the age-old death of Thomas and Martha Wayne, Bruce’s parents, Court of Owls introduced a shadowy organization that had effectively been at war with the Waynes for decades. The Court technologically advanced to the point of a single member being capable of standing toe-to-toe with Batman.

Let’s not forget the penultimate moment wherein Batman dons his power armor to fight off several assassins of the Court at once. The mad rush of incidents occurring, along with the in-depth detective work done by Batman to establish the Court’s existence, will also help give new gameplay opportunities while serving to further the player’s understanding of the universe.

And of course, the twist at the end is well worth the price of admission. The only real shame is that any developer won’t adapt the story outright due to said twist being easily looked up.

However, Court of Owls has all the elements necessary to serve as a standalone story. Many of the new characters are introduced in this tale itself and the Court of Owls is quickly established as a significant threat without much exposition being necessary. While War Games would be tough as a sprawling epic to fit into a single game, Court of Owls may have the issue of being significantly shorter and hard to implement into an open world presence. Then again, if Arkham Origins could have such a simple story and stretch it out over the course of a full length game, Court of Owls shouldn’t have problems finding takers. 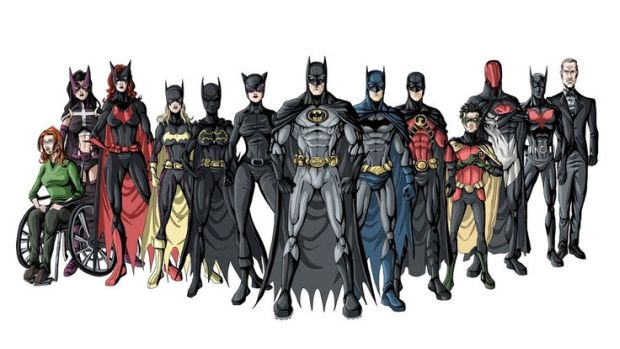 Before the announcement of Batman: Arkham Knight, many assumed that Arkham World was the next entry in the series, far-fetched as it sounds. After all, wasn’t the plan to introduce several citywide penitentiaries similar to Arkham City? The assumption was that the series would attempt to one-up its sense of scale and travel the world. With Batman Inc, that idea isn’t as difficult as one would think.

Batman Inc. marked a major turning point for the series as it saw Bruce Wayne publicly announce his alliance with Batman while working to establish several other cowl-wearing heroes across the globe. The plan was to have a Batman in just about every major country and this included former Batgirl Cassandra Cain as the Black Bat of Hong Kong, Batwoman, Batwing in Africa, Dick Grayson as Batman in Gotham City and Bruce Wayne acting as the head Batman. That’s a lot of Batmen and the overall scale of the series is much larger than we could describe.

The obvious caveats are introducing each of these characters, which could serve as Batman’s main story missions, after which the open world aspects allow you to play as them in their respective countries. Alternatively, an approach similar to Assassin’s Creed: Brotherhood could be taken wherein Batman completes missions to unlock new heroes and then allocates them for different purposes.

Once again, it would be difficult to pull off. And really, where do you go from here? That will be left for further down the line but if an open world adventure of the highest scale was sought, Batman Inc would serve its developer well.

Year One to Three 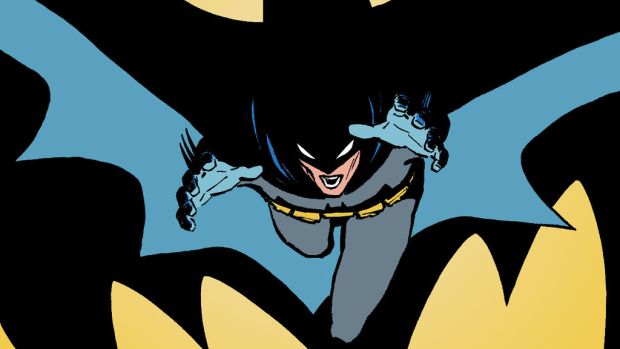 Let’s take a step back and assume that not everyone wants another open-world Arkham-style Batman game. Given how hard it would be to live up to the hype of Arkham Knight – or to atone for its failure if it doesn’t live up to expectations given its budget – what would be the next best option? An episodic action title? Perhaps an interactive adventure title akin to The Wolf Among Us with dollops of action in-between? For those who want a purely story-based approach to a new Batman game with a de-emphasis on beat ’em up mechanics, Year One to Three would be fantastic options.

Year One is perhaps Sin City creator Frank Miller’s most acclaimed work and effectively reboots the story of Batman, long portrayed as a jokey hero, to the Dark Knight we know and love. This story chronicles Batman’s creation while Year Two explores his development. Year Two also functions as a compelling tale of love and loss, introducing a formidable antagonist with The Reaper and exploring other sides of Batman’s personality including his struggles working with the man who killed his parents.

Year Three could serve as an adequate cap-off to the series as it introduces the various Robins – past, present and future – and creates potential for a brand new season of sorts. It should be noted that the amount of action in these comics isn’t high and there’s nothing grand on the scale of, say, Knightfall. However in terms of universe building and introducing the Batman, Year One to Three is top. 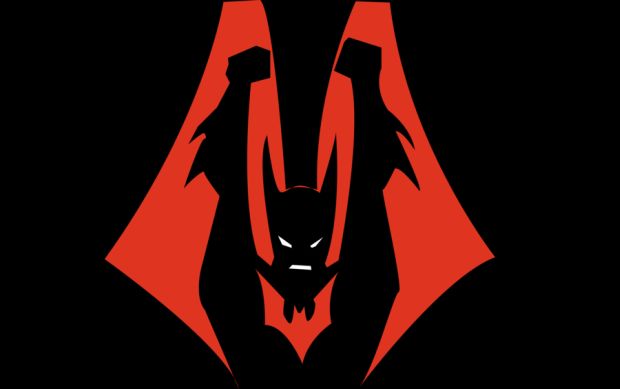 This is a series fans have been clamouring for a long time and to the point where Rocksteady Studios even incorporated a custom outfit for the same in Arkham City.

Batman Beyond takes place in the far-flung future of Gotham City and deals with Bruce Wayne, now old and broken down, passing on the mantle of Batman onto a relatively new character Terry McGinnis. Things aren’t always as they seem though (Terry and Bruce aren’t entirely unrelated) and Batman Beyond features its series of twists and turns. The introduction of a teenage hero presented a whole range of new possibilities for the storyline including romantic troubles, dealing with death and vengeance, and Terry’s overall method of doing things compared to Bruce.

It may seem like you can’t have Batman without Bruce Wayne but Batman Beyond did an incredible job presenting a brand new storyline while staying true to the essence of the series. There are also plenty of new gadgets and abilities that the new Batsuit brings to the series, including the elimination of the grappling hook as a means of travel.

In terms of obstacles, adapting the art-style of Batman Beyond may be tough. The TV series took a decidedly anime-esque approach to it all while the comics feature a realistic take that is fairly appealing. Whether fans would accept the art style remains to be seen but suffice to say, the demand for an adaptation wouldn’t be so high otherwise.