Total War has always been a series about capturing the scope of these big, historical battles and the nations that rose and fell because of them. The level of strategy to the game has always been a bit intimidating, but it was ultimately in service to the experience the game wanted to tell. Thrones of Britannia doesn’t do a whole lot to stray from this mold, as though the Total War Saga titles are going to be smaller in scope, it is very much still a Total War game. One more based in historical fiction than the fantasy fiction the game usually allows for, but still Total War all the same.

Thrones of Britannia of course, takes players back to the ages of kings and vikings, the warring British isles and all the bad blood of the time. It’s the kind of story that’s going to appeal far more to someone with an interest in the specific period that the game is loosely using, but it’s a story well told. Like other Total War games, it’s guided at the beginning, but becomes somewhat emergent as the game goes on and the player is allowed to make more decisions. Attempts to assassinate a king can desolve alliances and open all kinds of doors. 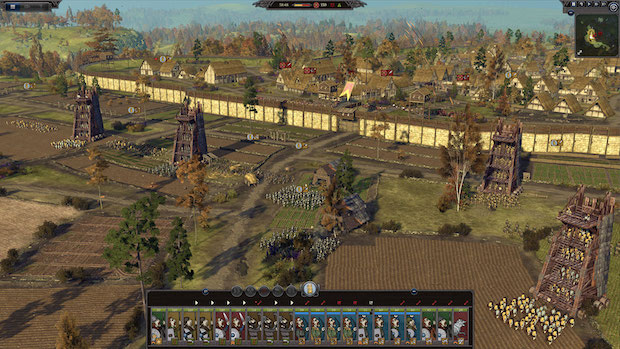 "In contrast to Total Warhammer’s over the top fantasy or other Total War games where you’ll see Germanic and Roman fighters go against each other, seeing the factions almost identical is rather disappointing, but not unexpected."

With the balance of power constantly shifting from turn to turn, events can be exactly what you make them. You could succumb to those kingdoms around you, or you can offer them trade to ally them. Certain cultural groups won’t always want to get along with each other, but the power of the coin or the threat of a larger enemy makes the strangest of bedfellows. Then when the alliance is no longer in your favour, perhaps you turn around and swallow the smaller kingdoms into your own. The historical setting isn’t limiting the stories that the player tells themselves, which is great.

The missions that advance the main story are fine, usually helping to build out those stories, and other kinds of events take place from time to time as well to mix things up. These events aren’t exclusive just to players, and AI decisions will be driven by similar quests, which will drive their decisions and can create mini-stories even without the player’s involvement, news of which will ultimately get back to the player, and perhaps even allow them to capitalize on the strife, such as rolling in and trying to take Scotland while the ruckus from a murdered king has them all split apart and easy pickings.

The zoomed in look at a specific historical region and time period does dull the interest and strategy of the game a little bit, where your units, regardless of which of the 10 factions you select, are all going to present and act about the same, with maybe a different unit or two. In contrast to Total Warhammer’s over the top fantasy or other Total War games where you’ll see Germanic and Roman fighters go against each other, seeing the factions almost identical is rather disappointing, but not unexpected.

While it’s still hard to say that Thrones of Britannia is very beginner friendly, with the kind of clunky UI and the depth to the strategy that previous games have seen, the title has smartly cut several systems that were just a pain in the butt to deal with over past games, streamlining the experience in several ways. First of all, leaders have taken over the role once held by the difficult to manage and understand Agents, who are gone completly.

Leaders are no longer grown through a skill tree, but influenced by their environment where they gain traits and the player decides how their followers will drive them. Players no longer need to worry about dealing with separate trade and military buildings, and creating the same buildings over and over again just to train up some cavalry. The map itself is rather expansive as well, probably a little too expansive, with areas of any interest fairly far apart from each other, making surveying all your options quite difficult.

Once finally engaged in battle, the game plays out basically like any other Total War title, where a preparation period will be followed by some RTS action. Players can use leader skills to supplement their own guile, and use the environment to their advantage, such as hiding some cavalry within the forests in order to flank the enemy. The strategies that can go into army makeup and the tactics you use with them can be varied and highly engaging, but actually learning those tactics beyond basic understanding can be cryptic and take some help from outside the game. 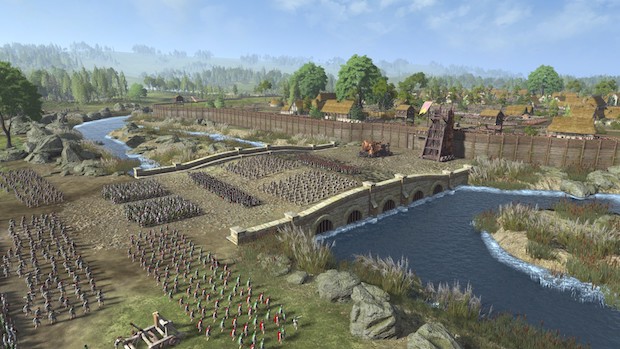 "The unique visual style does help lend the game an identity of its own, with side on portraits in a nordic and medieval style very befitting of the time, and some story scenes even playing out like moving murals."

The unique visual style does help lend the game an identity of its own, with side on portraits in a nordic and medieval style very befitting of the time, and some story scenes even playing out like moving murals. As for the map and action itself, the game looks very crisp and colourful. While as mentioned earlier, different faction units don’t look much different, unit types have distinctive looks, helping with fast decision making mid-action, and hold up when zoomed in a little better than Warhammer. At the bird’s eye view the game is meant to be played at, the seams aren’t super noticeable though.

All told, even though the game tries to cut off some of the fat that’s built up over several entries, A Total War Saga: Thrones of Britannia is still a great strategy title that’s just a little too hard to recommend to someone looking from the outside. Should you have the will to push through the learning curve either from interest in the time period, or through pure dedication, you’ll find something to enjoy.

The strategy and emergent elements that make the main Total War games so special is very much in full force here.

The visual deficiencies can show up close, and there's still an awful lot for players to digest about the game before they can really enjoy. That learning curve is not assisted by the UI.

Final Verdict:
GOOD
If you're a series' fan, you'll find a lot to like about Thrones of Britannia, and perhaps even appreciate the fat that's been cut to let you just get to the action faster. But overall, Thrones of Britannia is a hard game to recommend to someone who isn't already a fan of the genre.
A copy of this game was provided by Developer/Publisher/Distributor/PR Agency for review purposes. Click here to know more about our Reviews Policy.