Toukiden: The Age of Demons Review

Monster Hunter created an entirely new genre unto itself in Japan. The kind of co-operative, loot based, grind heavy, action game that Monster Hunter was inspired the imagination of an entire nation, and single handedly revived (and then) sustained the PSP. Entire handhelds’ destinies are made (see also: 3DS) or broken (see also: PS Vita) by Monster Hunter.

So, when Capcom announced that Monster Hunter would be migrating from PSP not to the Vita as expected but to the 3DS, the repercussions were felt throughout the industry- the handheld pronounced as dead miraculously came back to life and started kicking so much ass, it still dominates the current generation of gaming, beating out not just the PS Vita, but also console heavyweights like PS4 and Xbox One. Meanwhile, the Vita started squandering in obscurity.

Sony decided to get a replacement for Monster Hunter immediately, and they and their third party partners flooded the system with what can only kindly be described as clones; Toukiden: Age of Demons looked like an uninspired Monster Hunter knock off when it was first unveiled, but now that it is here, and we’ve played it, it feels amazing. Simply put, it feels like what Monster Hunter should be, as it stays close to the essence of that franchise, but also manages to move its basics forwards, and make itself better playing by way of some much better controls and combat. Simply put, Toukiden is a Monster Hunter better than Monster Hunter, and it’s definitely one of the better Vita purchases you could make right now. 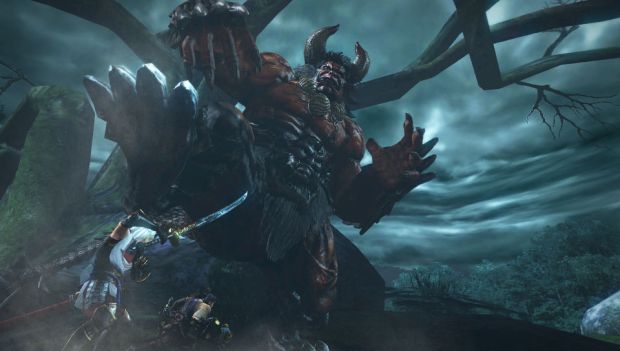 "Context alone wouldn't be all that helpful if what you were doing to begin with wasn't all that fun to do, and thankfully, Toukiden shines in this area- it takes the tried and tested Monster Hunter mechanics and setup, at this point refined to a shine, and it improves upon them."

A lot of this has to come with the context that Toukiden provides- unlike Monster Hunter, where you are a Monster Hunter dropped into the world with little to no explanation as to why you are here, and you are just selecting quests from a list with little to no sense of actual contextual progression except for the monsters themselves that do get more and more difficult, Toukiden actually gives you a reason for all the monster hunting that you are going to do- the world was overrun by demons many years ago after an invasion. The village that you find yourself in at the beginning of the game is one of the last standing human outposts against the Oni (that’s what the demons are called) onslaught. Your ‘quests’ and ‘missions’ are essentially you going to the frontlines and keeping the Oni at bay, preventing the invasion of the Midlands.

All of this gives some meaning to what you are doing, and as a longtime proponent of Monster Hunter, who has always deflected criticism of its lack of story, I can only say that it does make an incredible difference, that context here alone elevates the game to giving everything that you do some meaning and giving you a reason to keep playing.

Context alone wouldn’t be all that helpful if what you were doing to begin with wasn’t all that fun to do, and thankfully, Toukiden shines in this area- it takes the tried and tested Monster Hunter mechanics and setup, at this point refined to a shine, and it improves upon them. 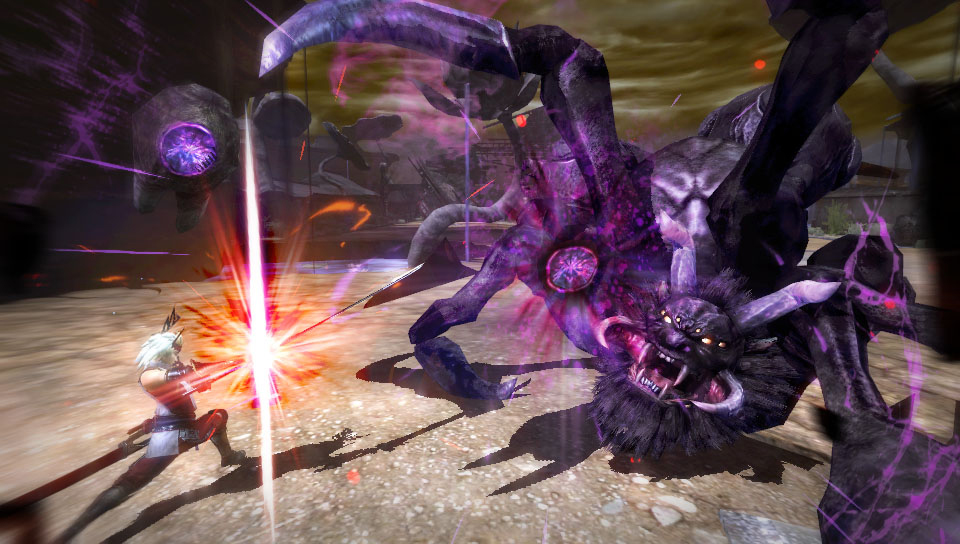 "Toukiden does add some of its own spin to the formula, though- the most obvious one is that, with the second analog stick being a default control option here, control, including camera control, is incredibly easy. "

The general game still plays the same- you select missions, you go out into zoned battlefields (sometimes with companions, sometimes without; for a lot of missions, you get to choose your own party, for others, the game prescribes one for you), you hunt down the objective and you try to take it down. After you kill it, you mine it for resources (which in this case may be either material or spiritual). When you attack a monster, you get no visible indication of how damaged it is, except for its behavior that you need to observe (although pressing Select activates the all seeing eye, that not only puts an HP meter over your enemies so you know exactly how weakened they are, but also highlights their weak points, and reveals hidden secrets on the map). As always, your style of attack is determined by what weapon class you choose for yourself. Your attacks themselves are tied to your Stamina meter (which also governs sprinting and other actions), meaning you need to handle and manage movement itself as a resource.

Materials and resources that you collect on the map can be taken back to the town to help you fortify and strengthen existing weapons, or craft new ones. The more powerful your weapons are, the more easily you can take down more powerful enemies (from which in turn you can harvest even more valuable resources to craft even better weapons).

Toukiden does add some of its own spin to the formula, though- the most obvious one is that, with the second analog stick being a default control option here, control, including camera control, is incredibly easy. Too often in Monster Hunter, it feels like the camera is a worse opponent to battle than the eponymous monsters- in Toukiden, the camera is snappy, easy to control, easy to center, follows you well, and generally stays out of your way so you can focus your energies on the true enemy.

Other additions include lots of minor streamlining, but ones that collectively make the experience so much more pleasant. Take, for example, running. Like in Monster Hunter, you cannot run while you have your weapon unsheathed. But unlike in Monster Hunter, where you have to press a button to sheath and put away your weapon, hold down a different button to run, and then draw your weapon out again once you are near your target, Toukiden simply handles all of this with a simple button press- press R, your character automatically sheathes his weapon and then runs in any direction you want him to. Let go of R, he automatically draws his weapon out. Running itself is still governed by the stamina meter, but now that is the only thing you have to battle instead of the controls as well, and the sheer convenience of that cannot be overstated. 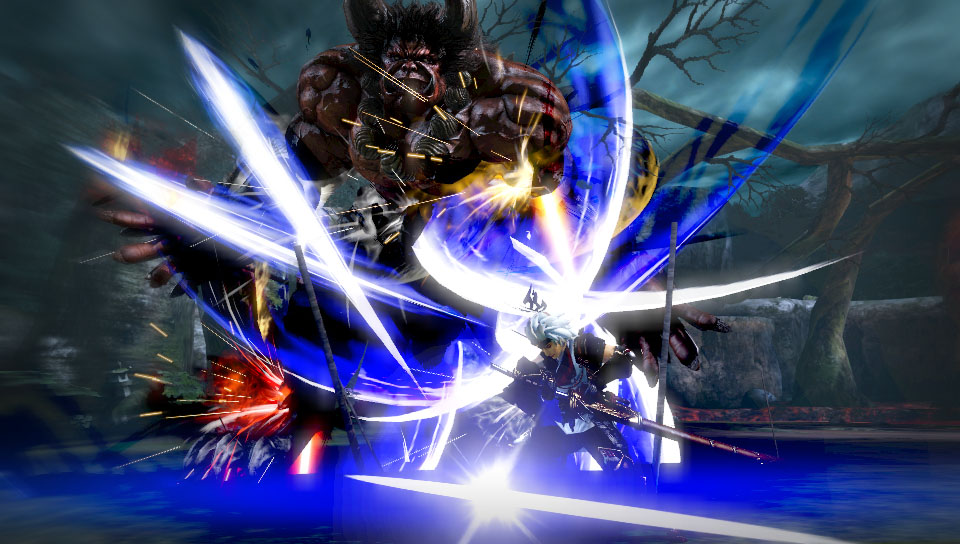 "Ultimately, Toukiden is a very solid start to what I hope becomes a mainstay franchise- I haven't been able to stop playing it over the course of the last few days, and I can't wait to get back to it."

Toukiden also contributes to the formula with mitama, which are souls of warriors before you that were captured and then imprisoned by the demons that you slay. Each of these Mitama can be equipped to your weapons, and they then bestow you you special abilities. Mitama can be leveled up, and the abilities that they give you can be used to your advantage in battle, especially in hectic boss battles against the massive monsters that you need to take down.

All of this is also complemented by an amazing multiplayer mode- the appeal of a game like Monster Hunter is built upon co-operative multiplayer, and for a series such as that, Monster Hunter has always made it bafflingly difficult for players to play online over long distances. Whereas it makes sense in context of Japan, where high population density and the proliferation and general acceptance of handhelds means that local multiplayer is not only possible, but also preferred, in context of the international market, it makes no sense (yet another reason why Monster Hunter is not as big abroad as it is in Japan). Toukiden, however, adds a seamless multiplayer mode, that makes it incredibly easy to set up multiplayer games both locally and online; although the single player components of these games alone are hundreds of hours, the multiplayer should add even more value to the package.

Ultimately, Toukiden is a very solid start to what I hope becomes a mainstay franchise- I haven’t been able to stop playing it over the course of the last few days, and I can’t wait to get back to it. The mark of a good game is not when it just manages to catch your attention, but also hold it over an extended period of time. In that regard, Toukiden excels almost absurdly. It’s an excellent action game that will keep you entertained for hundreds of hours, and it is heartily recommended to all Vita owners.

Builds on a very solid base with excellent controls, great additions to the existing formula, an emphasis on story that adds meaning to all the action, a great and seamless multiplayer mode, and hundreds of hours of gameplay

Still heavily based on and derivative of Monster Hunter.

Final Verdict:
SUPERB
Toukiden is an excellent action game that will keep you entertained for hundreds of hours, and it is heartily recommended to all Vita owners.
A copy of this game was provided by Developer/Publisher/Distributor/PR Agency for review purposes. Click here to know more about our Reviews Policy.