Tower of Guns Review – Do Robots Cry When Their Loved Ones Die?

All of the guns, none of the story your favorite first person shooter games offer.

Posted By Oliver VanDervoort | On 16th, Apr. 2015 Under Article, Reviews

When I first powered up Tower of Guns, I had to go back and look to see if Gearbox had made this particular game. The graphical look of the game, as well as the fact that a large part of the gameplay is based around really weird weapons made me think that if it wasn’t made by Gearbox, Tower of Guns was made by someone who had worked for the company or was trying out to be a part of the next Borderlands installment. That isn’t to say that Tower of Guns is really any kind of a ripoff of Borderlands 2. What it does say is that at least, this game is a bit of an homage that takes the first person shooter genre and the graphical representation of the game’s world and runs with it in its own direction.

The first thing that sets Tower of Guns apart from anything Gearbox has put together is that this game has long been billed as a kind of “lunchbreak FPS.” Having said that, I had caught someone’s comment about what the game was before I managed to get my hands on it and I have to say that is pretty much a perfect descriptor. This isn’t a game that has a terribly immersive story mode. In fact, it doesn’t really have any kind of story mode at all, unless you view a story as “hey look, shoot that thing that’s in front of you.” 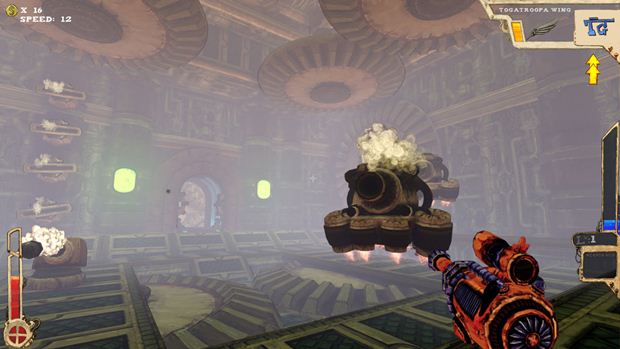 "The first thing that sets Tower of Guns apart from anything Gearbox has put together is that this game has long been billed as a kind of “lunchbreak FPS.”"

There is also a peripheral storyline that goes on while I was playing, in the form of text dialogue, though that storyline has no actual bearing on the game itself. Rather this seems to just be a little thing that is built in to bring the laughs. The one that pops up the first time I ran through the game was that of the developer actually telling me a few of the tips and tricks to get through the tower.

Other storylines were of a pizza delivery guy who was trying to find his customer and another and perhaps the most guffaw inducing was when I was going reading a conversation between an apparent old couple that had gotten lost. As far as I can tell, there isn’t any rhyme or reason to the text dialogue and while it is sort of funny, I had to wonder why the developer didn’t put a little more into fleshing this out and making it a real story.

It’s possible Tower of Guns was just never meant to be serious enough to need or want a real storyline in the game. This game seems to have been built for those who just want to be able to pick up the controller and shoot as many things as they possibly can. The premise of the actual game is that I had to either blast my way through, or dash my way through a number of different rooms, all with different “enemies”in the form of unmanned gun turrets and flying killing machines. 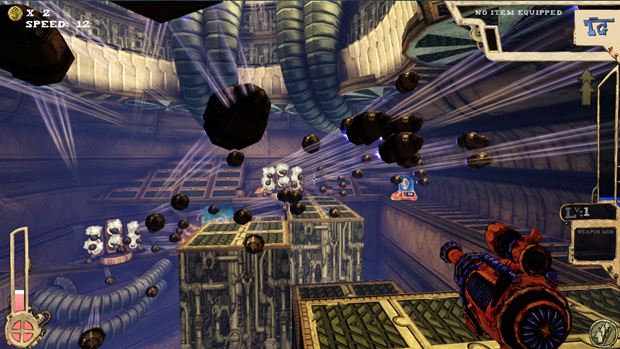 "It’s possible Tower of Guns was just never meant to be serious enough to need or want a real storyline in the game. This game seems to have been built for those who just want to be able to pick up the controller and shoot as many things as they possibly can."

Tower of Guns combines elements from a number of other video game platforms in a way that makes it enjoyable if you are indeed just looking for something to spend the next 20 minutes with. Picking up and playing, without having to wait through a cut scene in order to know what you’re supposed to do is refreshing at times. As long as you’re not looking for an immersive world that will really draw you in. The game is roguelike in the notion that the rooms are randomly generated throughout the levels so when you have to start your run over, you aren’t guaranteed to know what you’re going to be facing off against.

And you will have to start over a number of times. Tower of Guns isn’t an easy game by any stretch. The game tried to help me out by allowing me power ups if I killed enough enemies and collected the little blue lights that came pouring out of them after they blew up. The little red bulbs also replenished my health from time to time but the rooms aren’t big and the enemies are plentiful and I died far more often than I’m even willing to admit in my playthroughs.

Clearly I wasn’t the only one to have this problem, considering one of the most important stats the game tracks is deaths. This is also where the game gets a bit repetitive, there aren’t a ton of different enemies and the ones that are there aren’t meant to ooh and ahh you with their look and feel. 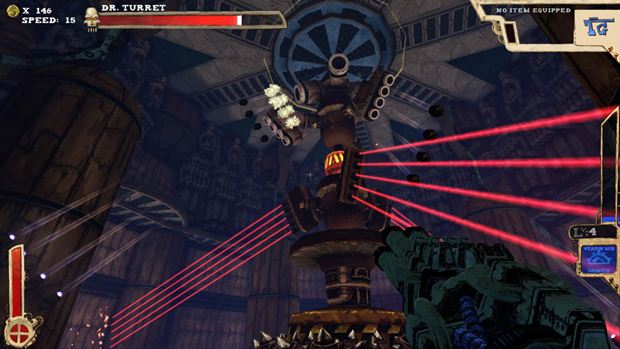 "Clearly I wasn't the only one to have this problem, considering one of the most important stats the game tracks is deaths."

There are boss rooms too, but these bosses are rather repetitive as well. I went through one run where I encountered the same boss four straight times. The repetition gets even more annoying considering that when you die, you start over entirely. There aren’t any chances to save your progress and start off in the room you died. Of course, the reason for that is because the game isn’t really about making progress.

You’re supposed to rack up as many kills, power up and collect guns as much as possible and score as many points. Without a proper story to play through, there really isn’t a huge point to making that progress. As long as you go into Tower of Guns understanding and accepting that premise, you can have a decent, if not great time playing the game.

Being able to pick up and play is a nice change if you have 20 minutes to kill and you do indeed just want to kill some things. The art style is appealing, if you’re a fan of games like Borderlands 2 or the Telltale Games series. There aren’t a ton of controls to master either. Just point, shoot and jump.

The randomly generated rooms don’t seem to have a great deal to pull from and that makes levels pretty repetitive. The best roguelikes will still have a story of some sort unfold in front of you while playing even if they aren’t beating you over the head with it. That’s not the case in Tower of Guns.

Tower of Guns isn’t a bad game and it certainly doesn’t bill itself as anything more than what it is. A “lunchbreak FPS”is indeed an apropos descriptor. Still, it doesn’t bring enough new concepts to the table to really wow players.

A copy of this game was provided by developer/publisher for review purposes. Click here to know more about our Reviews Policy.
Tagged With: GRIP Digital, pc, ps3, ps4, SOEDESCO, Terrible Posture Games, Tower of Guns