Transformers, roll out… Or not.

Transformers: Rise of the Dark Spark, released on just about every console available right now, just in time for the latest film release is quite frankly, boring.

Hasbro invented a cast of outer-space machinoid characters that can transform into anything imaginable including trucks, sports cars, jets, insects, robot animals, Christ even a robotic T-Rex. How hard is it to make a decent game that capitalizes on such gleeful craziness? Apparently pretty hard for developer Edge of Reality who have taken the reigns after High Moon’s successful stint on the last two Cybertron-centric titles.

Transformers: Rise of the Dark Spark features what starts off as a totally acceptable, standard, Transformers-fare adventure wherein the various Cybertronian tribes including the Autobots and Decepticons are fighting over the latest gadget; the Dark Spark. This sought after item apart from being really dangerous also has the ability to control space and time. This is where things turn bizarre by combining the movie-universe Transformers with the more classic War of Cybertron universe of Transformers resulting in a crossover nobody really wanted. 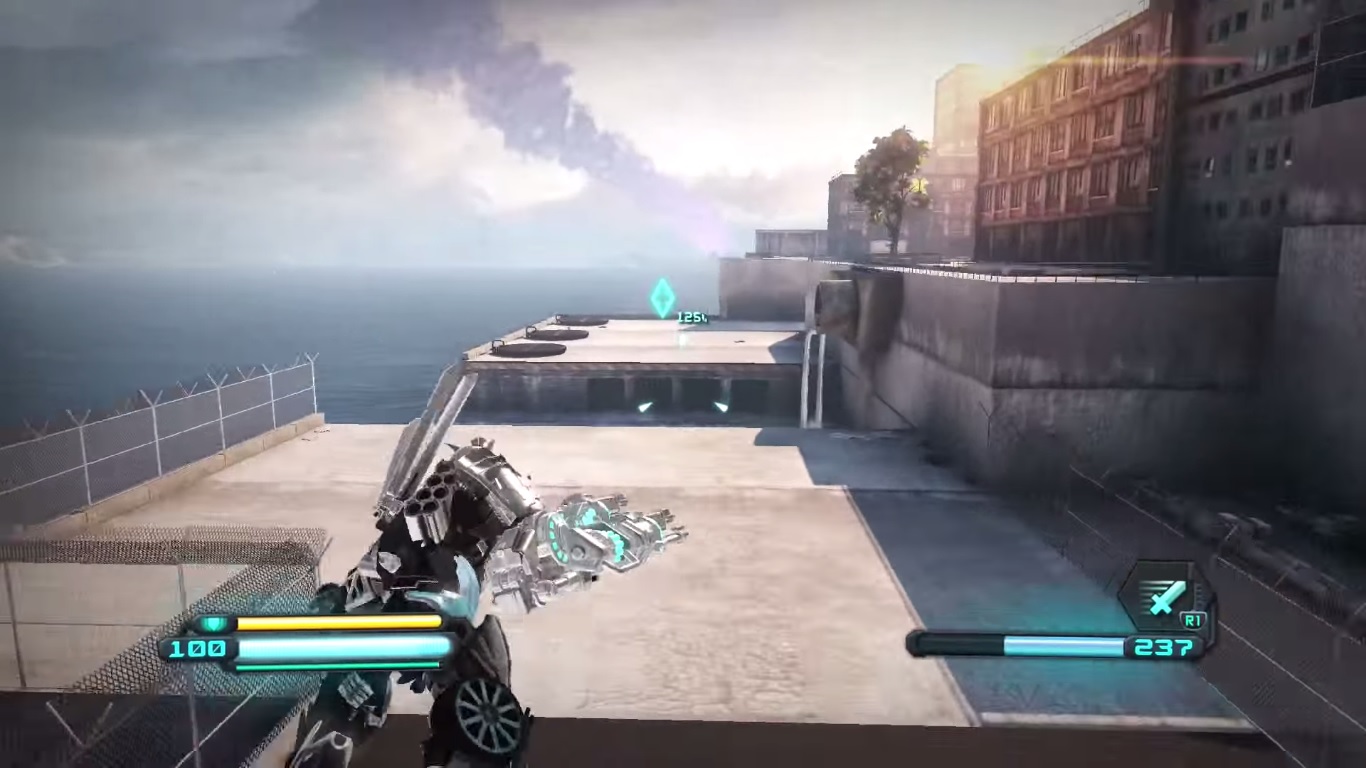 "The game plays very much like the standard third-person shooter which kind of ruins the awe of being a giant mecha-robot as you feel pretty much like you’re playing as any generic shooter character invented."

The game takes place over 14 different chapters, each featuring a different playable Autobot or Decepticon. The game flings the player between the two warring parties back and forth resulting in confusion over which side you’re actually playing for with only their dialogue or Transformer designs as clues. No matter which side you’re playing as the levels are all the same, boring affair with the usual arena’s full of repeated enemies that need to be destroyed in order to continue.

Sometimes, just to spice it up that extra bit more the player will need to flick 3 switches/levers/terminals to access yet another combat arena because the fun just never ends. Each level feels like an endless slog through unintelligent enemies and repetitive environment designs.

The game plays very much like the standard third-person shooter which kind of ruins the awe of being a giant mecha-robot as you feel pretty much like you’re playing as any generic shooter character invented. The weapons are a decent mix including the expected pistols, heavy pistols, machine guns, gattling guns and even a lightning gun which produces chains of lightning across multiple enemies. Combat is fairly satisfying when cleaving through a pit of insectoid mechs however it doesn’t pack that oomph that’s expected when playing as a freaking Transformer.

The game features an attempt at customization as each weapon is customizable and upgradeable. Terminals throughout the levels will offer the chance to customize loadouts including primary and heavy weapons, the ability to equip T.E.C.H which is the games perk system and other little bonuses. Gunning your way through the levels will unlock prize boxes which contain random selections of weapons, T.E.C.H and characters to play as in the half-arsed multiplayer mode. 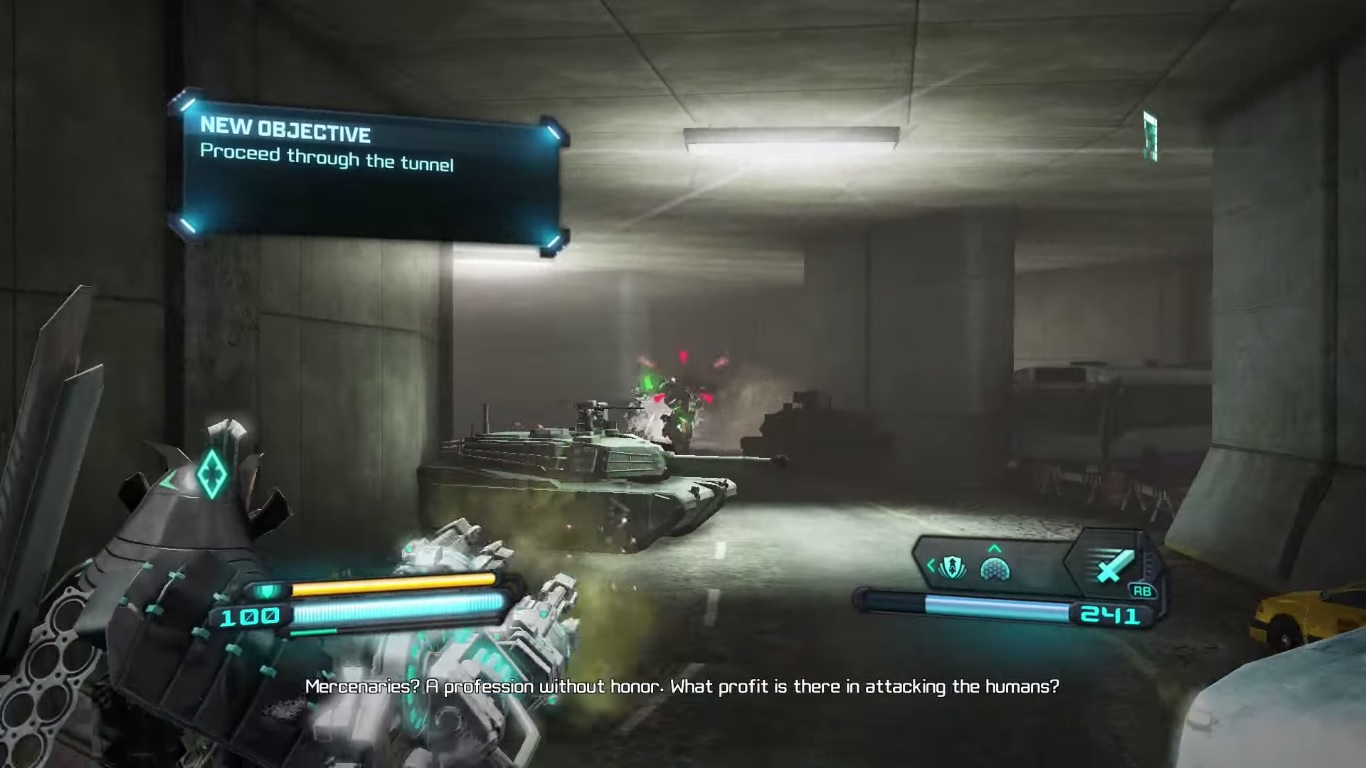 "The multiplayer mode included is barely worth the energy spent typing these words as it only contains a wave/horde mode in which you team up with some friends to slog it out against increasing amounts of enemies and use your cash earned to buy upgrades."

Everyone knows that the best part of the Transformers is their ability to, well, you know, transform. Only in this game this ability is mostly pointless and extremely dissatisfying. The controls for the vehicles in the game, which can be transformed into with a click of the right analogue are extremely confusing as they feature not one but two boost buttons. How does that make sense? Flying around as a fighter jet is fun for about 30 seconds then gets frustrating when you immediately get shot out of the sky by over-powered drones that appear from nowhere.

The multiplayer mode included is barely worth the energy spent typing these words as it only contains a wave/horde mode in which you team up with some friends to slog it out against increasing amounts of enemies and use your cash earned to buy upgrades. Rise of the Dark Spark could have easily included a coop feature throughout the campaign as AI allies regularly join the fight however this is noticeably absent.

The visuals suffer with texture pop-ins which often look flat and dull. The Transformers themselves look decent, often with animated moving parts. Long loading times between the levels also ruin the experience.

Overall the latest Transformers outing lacks the fun and excitement that should come with playing as warring, oversized robots.

Decent combat, Good choice of weaponry, Flying as a jet is fun for a short while.

A dull and uninspired take on the Transformers with boring level design and overly complicated story. Give this a miss and try High Moon’s Cybertron series instead.

A copy of this game was provided by developer/publisher for review purposes. Click here to know more about our Reviews Policy.
Tagged With: 3DS, activision, Edge of Reality, pc, ps3, ps4, Transformers: Rise of the Dark Spark, WayForward Technologies, wii u, xbox 360, Xbox One 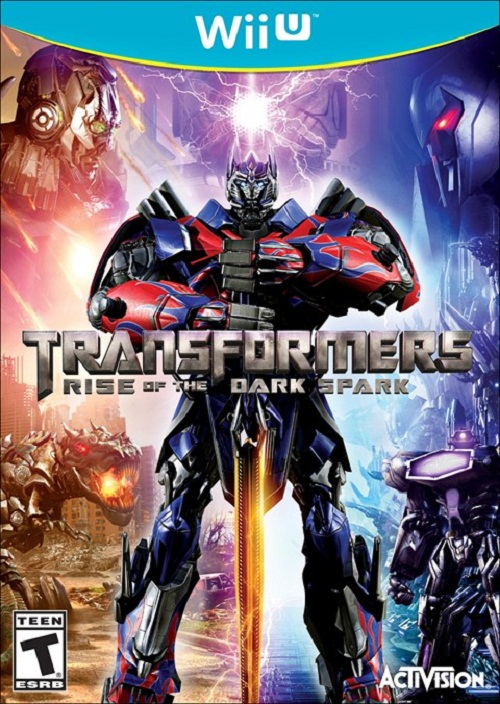