The No More Heroes series has been missing in action for a while now. The last entry in the series, No More Heroes 2: Desperate Struggle, launched for the Wii all the way back in 2010, and since then, we’ve had nothing. Fans of the original games, who were taken by how hyper violent the games were (in sharp contrast to Nintendo’s own sanitized family friendly games that form the bulk of the library on their consoles), by the eccentricity of protagonist Travis Touchdown, who almost feels like a stand-in for the quirky series creator Goichi Suda at times, and the bizarre, meta, fourth wall breaking self awareness of the original games, have had little to sate their appetites since.

Judged by those metrics, Travis Strikes Again is every bit a true successor to the original games. Back again is Travis Touchdown, every bit as wacky as he ever was, if not more so. Back again is the games’ unique sense of aesthetics and humour, with their constant fourth wall breaking and meta self-awareness. What has changed, however, is the actual gameplay part of the equation.

This actually ties into Travis Strikes Again’s premise. Tired of the constant bloodlust of the Assassins underworld, Travis has retired to a trailer in the Texan countryside, so he can live life a little, and stop to smell the flowers (or, well, video games, in his case). His tranquil existence is brought to an end when he is hunted down by Badman, the father of an assassin Travis took down in the original game. Badman and Travis form an uneasy alliance as they look to hunt down over half a dozen legendary games for a canceled video game console that never got beyond the prototype stage, since doing so grants you a wish, and it will allow Badman to wish his daughter back to life. 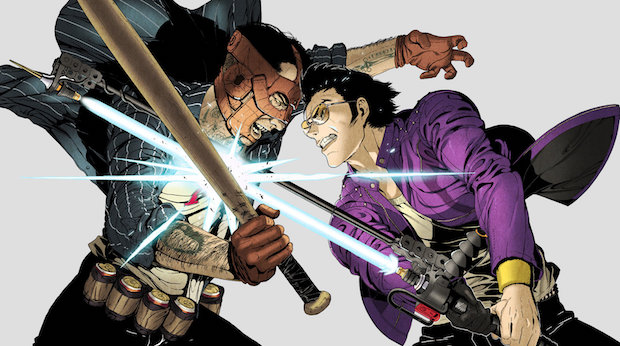 "Travis Strikes Again is every bit a true successor to the original games. Back again is Travis Touchdown, every bit as wacky as he ever was, if not more so. Back again is the games’ unique sense of aesthetics and humour, with their constant fourth wall breaking and meta self-awareness."

A large part of the gameplay in Travis Strikes Again is you playing through these in-game games. Travis and Badman can insert themselves into these in-game games and play through them. The games themselves are varied, and glorious homages to retro 8- and 16-bit games, as well as some old-school arcade classics. We get Sega-CD style FMV games, we get 2.5D side scrolling brawlers, overhead action games, vector racing games in the vein of Tron, and so on (with special shouts going to the murder mystery puzzle action game with Sega CD FMVs, and the racing game RPG, as standouts). Each game has you fighting through waves of enemies (game “bugs”) as you strive to reach the end, while also contending with its unique mechanics and design hooks, which keep things fresh, and keep the gameplay loop varied.

The games are marvellously designed—they never outstay their welcome, and they capture the spirit of the classic games they seek to emulate really well. The aesthetic and gameplay of those games is surprisingly authentically recreated here, and they also serve as the canvas for a whole lot of the game’s eccentricities (what with you playing a game within a game).

Of course, combat is still a core tenet of the gameplay here, and it’s surprisingly well translated from the third person action perspective to the more old school ones we get here. New to Travis Strikes Again are special skills you can equip to one of the face buttons, which can give you an edge in battle, but which must be hunted down in the form of Skill Chips in the game’s worlds (thus giving you an incentive to not just beat on enemies, but also to stop and go off the beaten path a bit). The core combat loop of light attacks and heavy attacks tends to get a bit shallow, especially as you move later on into the game, but thankfully, the gimmicks of the different video games you are playing through tend to keep things fresh there, even as the combat itself ends up taking, surprisingly enough, a bit of a backseat. 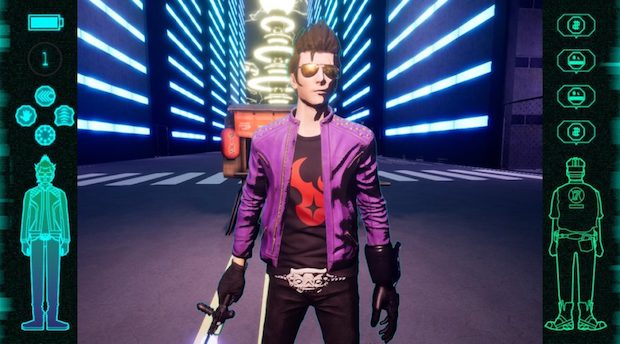 "Combat is still a core tenet of the gameplay here, and it’s surprisingly well translated from the third person action perspective to the more old school ones we get here."

A second part of the game involves a full fledged graphic adventure that plays out like a visual novel, called Travis Strikes Back (no confusion here), and sees you try to find the remainder of the Legendary Games you and Badman need (Travis starts out with only one). These segments are presented as Metal Gear style codec windows, in an old school phosphoric green hue, and feature the cleverest writing in the game, with some great humour and fourth wall breaking. They also are the sections that actually move the larger “narrative” of the game forward, and serve to actually flesh out Travis, Badman, and the other players in this play. They can be quite long, but serve to provide a nice distraction from the relentless action of the video games you need to play through.

You can also step out of the games at any time and take some time off in Travis’ trailer, where you can play with your cat Jeanne, read articles and blog entries about the games you are playing or the ramen you are having, and shop for new shirts for Travis to wear, which are all collaborations with indie game hits, such as Hotline Miami and Hollow Knight, and which further add to the general love for indie games and retro games that permeates every part of Travis Strikes Again.

Travis Strikes Again is a substantial experience—the game clocks in at over ten hours, which makes it as long as the Wii games, but ends up featuring more variety than either of those games did. It also features two playable characters (Travis and Badman), each with a different gameplay style, and full support for co-op play as well. It looks absolutely gorgeous, with the retro games looking incredibly sharp while retaining the spirit and essence of the originals that they are based on, and performance for the game never seems to slow down. For long time Travis fans, series staples, such as shaking the controller to charge your katana, Robin Atkin Downes’ turn as Travis, or taking a leak to save the game, is all present here too, and while the camera perspective is a big shift, Travis Strikes Again never feels lesser than the previous titles.

It’s not No More Heroes 3, but it’s a surprisingly full featured and fleshed out game, featuring some genuinely clever writing, and extremely meaty gameplay, as well as a whole lot of variety (something the older games always struggled with). Fans of Travis Touchdown need no longer wait—true to what it says on the tin, in this game, Travis strikes again. And boy, does it turns out to be worth it.

Plays well, with extremely imaginative levels to play through and unique design hooks; has a lot of gameplay variety; sharp writing and humour, and constant meta fourth wall breaking; the game is a loving homage to video games through and through; loads of small callbacks to the older games; co-op support is great

The actual action gameplay can get surprisingly shallow at times; it’s different enough from the original games that many fans may be disappointed after this long a wait

Final Verdict:
GREAT
It’s not No More Heroes 3, but it’s a surprisingly full featured and fleshed out game, featuring some genuinely clever writing, and extremely meaty gameplay, as well as a whole lot of variety (something the older games always struggled with). Fans of Travis Touchdown need no longer wait—true to what it says on the tin, in this game, Travis strikes again. And boy, does it turns out to be worth it.
A copy of this game was provided by Developer/Publisher/Distributor/PR Agency for review purposes. Click here to know more about our Reviews Policy.