Cinema sounds in the comfort of your own home

It’s testament to the sheer quality of the TRITTON 720+ headset (retailing for £129.99 in the UK and $149.99 in the US) that my wife, a self-proclaimed non gamer reluctantly donned the headphones but refused to return them after listening to the campaign intro for Modern Warfare 3. After her jaw had visibly dropped, she instead demanded that I replay it and then proceeded to negotiate the debris-strewn streets of New York. Like her, I was quite taken aback by the sheer cinematic quality that oozed from each earpiece, the recent launch from Mad Catz offering 3D Directional Audio and 7.1 Surround Sound.

Clearly, the 720+ is by no means inexpensive or a purchase that can be taken lightly but for those of us keen on experiencing games to the full, it could prove a very shrewd investment. 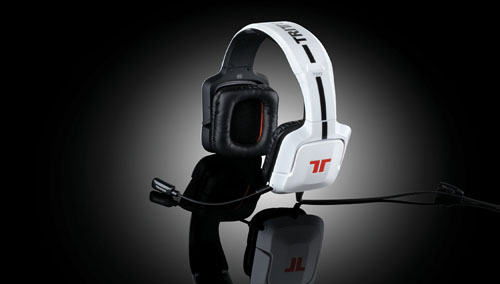 The 720+ headset is an impressive bit of kit

Having undergone a radical overhaul from its previous incarnation, it looks absolutely fantastic and appears to be a sturdy bit of kit. Blinding white, with TRITTON emblazoned across the headband, it all looks stunning.

Inside the tightly-packed box lurks a collection of cabling long enough to reach across a larger-than-average room, an optical cable, USB lead and controller connector should you be using this with your 360. You don’t have to, mind – this nifty peripheral is also compatible with your PS3 (and PC/MAC in Europe), which certainly helps to justify its price tag.

Central to the functioning of this technical wizardry is the inclusion of the discreet decoder box, with its master volume button and raft of LED lights. This is where the magic happens. Even more impressive is the fact that no power supply is needed, meaning the box of tricks gains all necessary power through the USB from the back of your console. 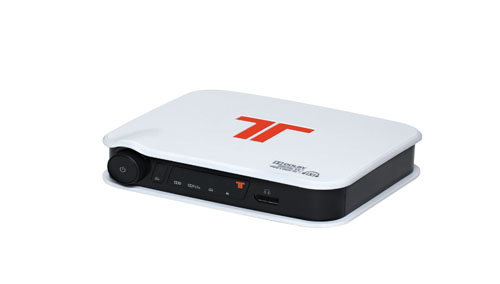 A separate flexible microphone can be plugged into the headset and contorted any which way you like. When you’re done, a simple twist and pull removes it. Friends tell me that my speech is nice and clear – although they did mention a little too much background noise on occasion.

The in-line remote offers a mute switch, volume control and the rather cool Selectable Voice Monitoring (SVM), which gives me the option to hear my own voice while speaking. It’s a great feature that means you’ll know how loud you’re talking to friends and opponents, and won’t bother people around you – especially useful for late-night gaming sessions!

We’ve tried countless headsets over the years, all promising the most amazing audio experience and many failing to live up to the hype…The 720+ certainly doesn’t fall into that category and performs well. No matter what game you opt to play, it truly feels like you’re sat in a movie theatre. The bass is deep and reverberates through your skull, while the subtle sound effects are clear and sharp. Cut scenes are crisp although some voices seem a little more distant than I’d like – it was exactly like those emitted from the speakers in a several-hundred seater cinema.

A few missions of Battlefield 3 and Call of Duty: Modern Warfare 3 had us convinced; all the explosions, gunfire and the mayhem left us buzzing. The 720+ truly adds to the atmosphere and presents an altogether different experience from simply being sat in front of the screen and relying on the integrated TV speakers. If you want the feel and sense of an expensive speaker set up, then these are definitely for you. 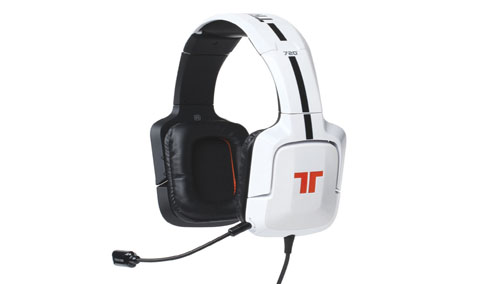 You’ll be absolutely blown away by some of your games

But while we expected your typical FPS to produce those results, it also transformed games like FIFA 13. No longer was the commentary central to each match but we could now make out crowd chants in certain areas of the ground as well as the frustrating thud of the crossbar with a miscued shot and the gentle ripple of the net after scoring a wondergoal.

Resident Evil 6 was transformed too. The cut scenes (of which there are plenty) were of cinematic quality and really drew me in, while the ingame sounds were suitably eerie and well defined. From the boom of a shotgun to the groans of the undead, the headset accentuated my playthrough.

The 720+ headset is perfect for capturing the atmospheres and environments of your favourite games. I’d definitely say it’s well suited to big, cinematic affairs – explosions, crowd noise. Where it’s perhaps overshadowed by other headsets – such as the new TRITTON Pro+ reviewed here – is in its ability to gauge distance and where sound is coming from. Playing online in Modern Warfare 3, the gunfire and destruction is captured perfectly… but listening out for the delicate footprints as you progress through enemy-occupied buildings is a little trickier to make out. Sure, you can hear them but it’s pretty difficult in the heat of battle to determine where they’re coming from.

There is also no real way of customizing your aural experience – no knobs to turn, or switches to switch that can really alter the acoustics (unlike the Pro+). This headset gives the user great sound with depth and oomph but little option of tailoring it for your needs. For most, this won’t be an issue at all; many people afterall, won’t care whether they can tweak the subwoofer or change the sounds coming from front and rear… but it may be a factor that helps to determine your purchase.

It feels lighter than its bigger brother and is really comfortable for lengthy gaming sessions. From the cushioned headband to the swivel feature of the earcups, this is a well designed beast of a headset.

For me, the TRITTON 720+ is an awesome headset that enhanced my gaming experience. I’ve been blessed with a large screen TV for years but only now do I feel I’m the full potential of the games I’ve been playing; 7.1 Surround Sound is incredible and Mad Catz has made it accessible to the masses!

This headset was reviewed on Xbox 360 and PS3.

Not cheap. Voices can sound a little distant in games. Lots of cabling. Sounds aren’t adjustable

Final Verdict:
SUPERB
The TRITTON 720+ 7.1 Surround Sound headset boasts amazing sound that will transform your gaming
A copy of this game was provided by Developer/Publisher/Distributor/PR Agency for review purposes. Click here to know more about our Reviews Policy.