Games have never sounded so good

Pluck the sleek white TRITTON Pro+ multi-format headset from the packaging and its build quality is instantly recognizable. Sturdy while lightweight, this True 5.1 Surround Sound headset looks lovely. Included in the box is a wealth of cabling, connectors and the important decoder box through which everything is connected. Bear in mind, you’ll need a spare plug socket to give it the necessary juice to blow your ears off though. 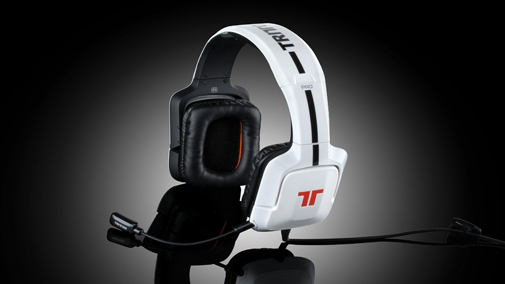 Set up can take a while, but is relatively painless thanks to the included instructions, which outline how your 360 and PS3 (as well as PC/MAC in Europe) can be connected. There are a lot of ports to navigate, however, with optical lead, USB cable, power supply and another couple of leads to connect to the Xbox controller (they even bundle a cable for use with non-standard controllers). Unlike some rival headsets, it’s great that every conceivable cable is included in the box – even the older Xbox 360 model is catered for. The 12ft cable that runs from the decoder box to the headset means you can comfortably sit back a fair distance from your console too.

The successor to the AX Pro, the new Pro+ headset crams four Neodynium drivers into each ear (30mm Front & Rear, 23mm Center, 40mm Sub) to provide thumping base and decent midrange. It looks and feels lovely – with nicely positioned over-ear cups and plush leatherette cushioning. Even the outer portion of the headsets lights up with the trademark double-T logo glowing orange when it’s up and running. All external sounds are nicely isolated so you’ll be hard pushed to hear anything beyond the confines of those earcups too. A nice touch is the Selectable Voice Monitoring (SVM) feature, which lets you hear your own voice when you speak so you’ll never need to shout and disturb those around you! 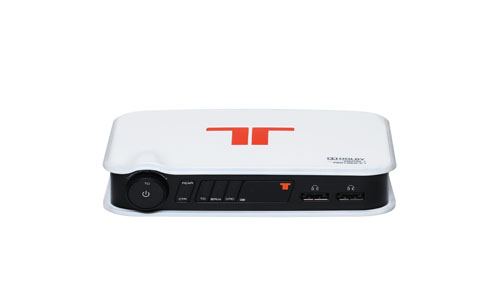 The decoder box connects to the headset via a 12ft cable

Despite the very rigid appearance of the Pro+, it’s supremely comfortable and quickly becomes more supple after use. Your ears are nicely encapsulated and won’t feel squashed, while sweating is less of an issue than some rival headsets. There’s also a thick cushioned strip that lines the band that sits atop your head. For those of you with larger heads, the headrail is also extendable so you can ensure a decent fit. Thanks to the various speakers packed within the headset, it can feel a little weighty during long gaming sessions, however. But those guys at Mad Catz have again made removing them for a quick break as easy as possible by incorporating the trademark Tritton swivel on each earcup so they rest nicely around your neck.

We did find that for the best results, you really need to take some time to configure all the settings at the start, with each driver tweakable via the inline control. Additional buttons on the decoder box feature nifty features such as “Time Delay” – to adjust the front and rear channels and the time it takes the sounds to emerge – and “Dynamic Range Control” to change balance and ensure you can pick up both soft and loud sounds. 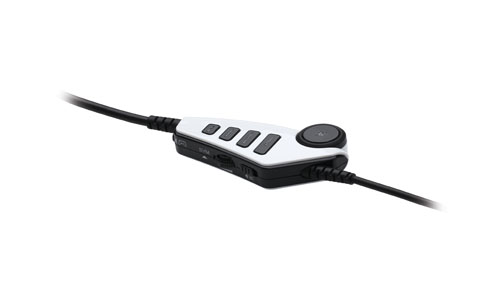 Playing Black Ops or Modern Warfare 3 was a joy with these on your head. You’re given complete control over the front, central and rear speakers as well as the subwoofer and can change the settings to ensure even the most subtle footsteps are detectable. We played many matches online and it really did appear to improve our performance; being able to gauge which direction gunfire was coming from certainly improved my position in the leaderboards. Try spinning around on the spot while stationary too and you’ll hear the positioning of the explosions and shots change. Magic.

We also put it through its paces with a few other popular titles and were very impressed with the results. FIFA 12 was hugely atmospheric with the Pro+ headset – every tap of the ball, blow of the whistle and roar of the crowd resonates through your ears as though you’re there. Get a win and the cheers and celebrations blow you away. And wait until the soundtrack kicks in… the tunes thumping away in the background sound fantastic.

Similarly, a playtest of Resident Evil 6 certainly added to the atmosphere as we negotiated the gothic cathedral, Chinese streets and snowy mountain ranges. As you’d expect, zombie games are perfectly suited to this kind of setup with all those groans of the shuffling undead creeping up behind you. The sound effects are nicely amplified too – and it was quite impressive that you could pick up every minute detail. Wandering round the halls of the university campus, for example, the squeak of the floorboards was otherwise missed through my TV speakers. Add the cinematic background music to the mix and the experience is fantastic. 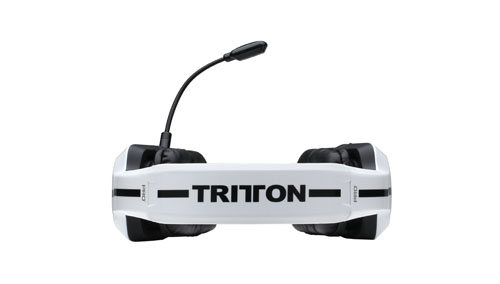 The build quality is superb

Against friends, voice chat is crystal clear, helped by the removable and highly-flexible microphone that connects to the left earcup and can be positioned wherever you please. The only real downside seemed to be that it picks up a little too much… some friends mentioned they could hear every little sound in the background of my room as well as my voice.

Sure, it would have been cool if they were wireless, there’s loads of cabling and they’re not cheap (£149.99 in the UK, $199.99 in the US) but whether you’re gaming, playing music or watching movies, the Pro+ performs well whatever. The retail price may be high but for the build quality, performance and the amount of use you’ll no doubt get out of them, they’re well worth the investment. You’ll never listen to games in the same way again!

This headset was reviewed on Xbox 360 and PS3

Awesome 5.1 Surround Sound that can be customised and adjusted. Extremely comfortable even for lengthy gaming sessions. They look fantastic with good build quality

Not the cheapest option - almost costs as much as the console itself. Cables, cables, cables... there are loads of them. You have to tweak the settings to get the most out of this headset

Final Verdict:
EDITOR’S CHOICE
Mad Catz redesigns the popular AX Pro headset. True 5.1 Surround Sound to enhance your gaming. The Pro+ is expensive but worth it
A copy of this game was provided by Developer/Publisher/Distributor/PR Agency for review purposes. Click here to know more about our Reviews Policy.