Tropico 6 Review – The Man For The Hour

El Presidente rises again in this return to form for the series.

City builders have had somewhat of an odd history as of late. While titles like Cities: Skylines continue to receive downloadable content, others like Frostpunk appear every now and then with their own post-apocalyptic hooks. This isn’t including all the early access titles that can be rather hit or miss in their execution. Tropico fits into the category of long-standing city-builders that seen sequels in an industry of changing trends and platform updates, much like Ubisoft Blue Byte’s Anno series. There’s just something about playing as a dictator figure, taking in the sun-kissed beaches, transporting cigars and crops to the waiting world and waddling with just the right amount of corruption to keep things going.

Tropico 6, developed by Limbic Entertainment instead of Haemimont Games, is a tribute to that life-style. It creates a raucous, mostly hilarious atmosphere while implementing a bevy of construction, political management, economic wrangling and superpower-dealing tools to keep you engaged from one era to the next. Catering to veterans of the series while keeping first-time players coming back for more is a tough task for any franchise, let-alone a strategy game like this. But I believe Tropico 6 pulls it off with aplomb even with a few rough edges here and there. 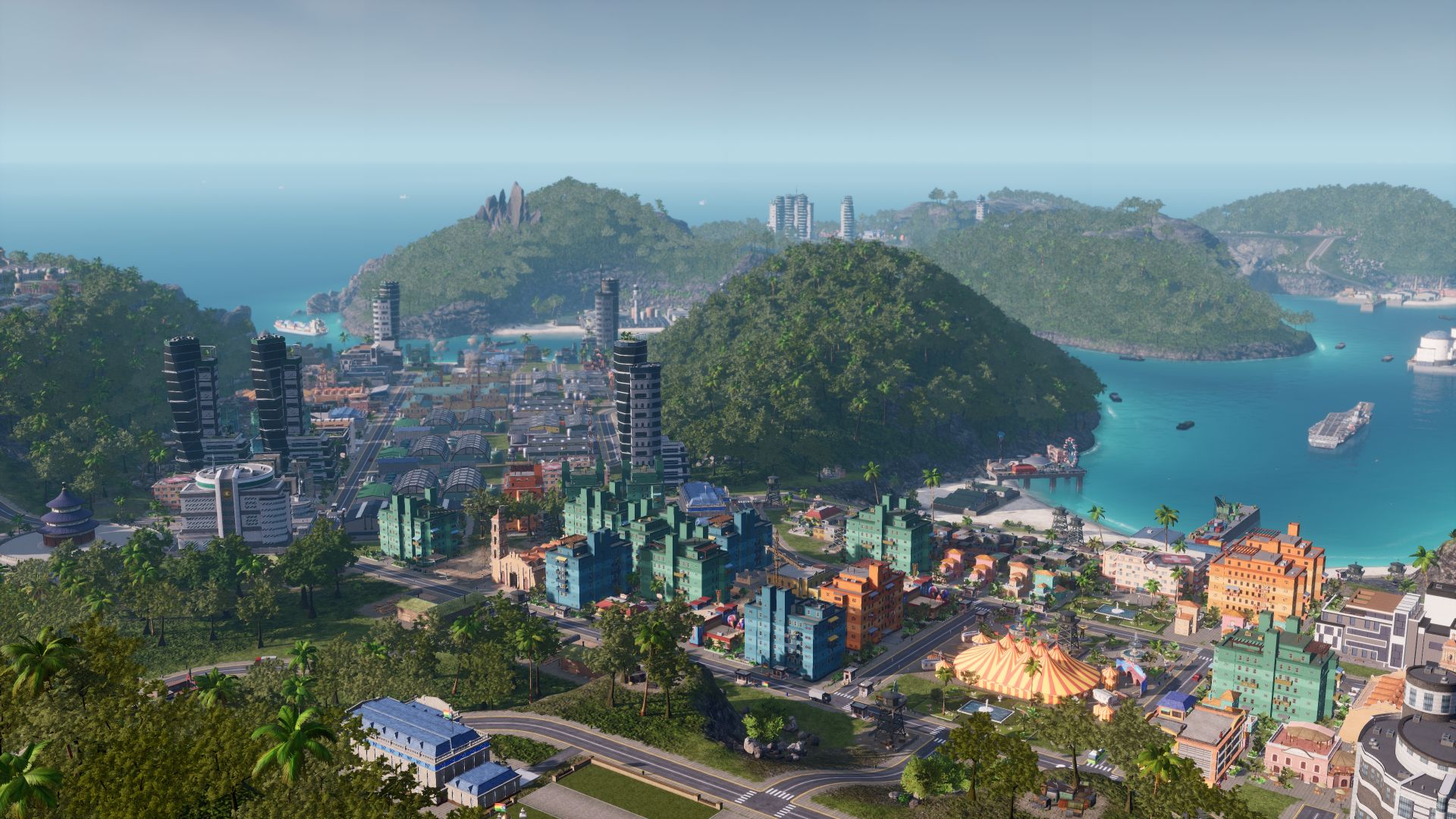 "The music is also great – even if some tracks land better than others, that atmosphere of lounging around in the Caribbean is expertly fulfilled here."

You are, as always, El Presidente. You rule over the islands of Tropico, whether through benevolence or back-handed dealings. Your job is to keep the people happy and/or voting for you. You can scrape by on their measly demands, suppressing rebellions and storing money in your off-shore back account. Either way, the starting goal is to expand, laying down more buildings and accruing enough industry to keep expanding. Right off the bat, Tropico 6 entices you with its bright, clean-cut visuals and while they may not be the most cutting edge on the market, they convey the atmosphere of a banana republic very well. Trucks are constantly moving back and forth between ranches, tanneries, mines and plantations. Ports are buzzing as exports are sent out and come back with that sweet revenue. Palm trees dot the landscape against an idyllic skybox.

El Presidente can be customized from the outset in terms of makeup, hair type, gender, hair colour, hats and whatnot though several clothes and options are locked behind certain goals. Special traits provide bonuses that can augment towards your overall approach. The Charismatic trait is perhaps the best for beginners since it increases standing with factions and relationships with Superpowers. The Corrupt trait is good increasing funds to one’s off-shore bank account at the risk of crime safety while Workaholic provides increased building efficiency at the risk of job happiness.

Designing your personal palace is the crown on top of the gaudy crookedness that El Presidente represents. There’s just something satisfying about having classic Fountains and a Flamingo Pond on one’s front yard with Glass Pyramids adorning the roof. Starting up some missions and following the story of El Presidente and his loyal aide Penultimo is a good way to get into the game’s mechanics. However, you’ll want to peruse the extensive tutorial system first since it’s good for explaining everything that Tropico 6 has to offer. Penultimo’s sniveling is only accentuated by his excellent voice acting – it strides that fine line between annoying and endearing. The music is also great – even if some tracks land better than others, that atmosphere of lounging around in the Caribbean is expertly fulfilled here. 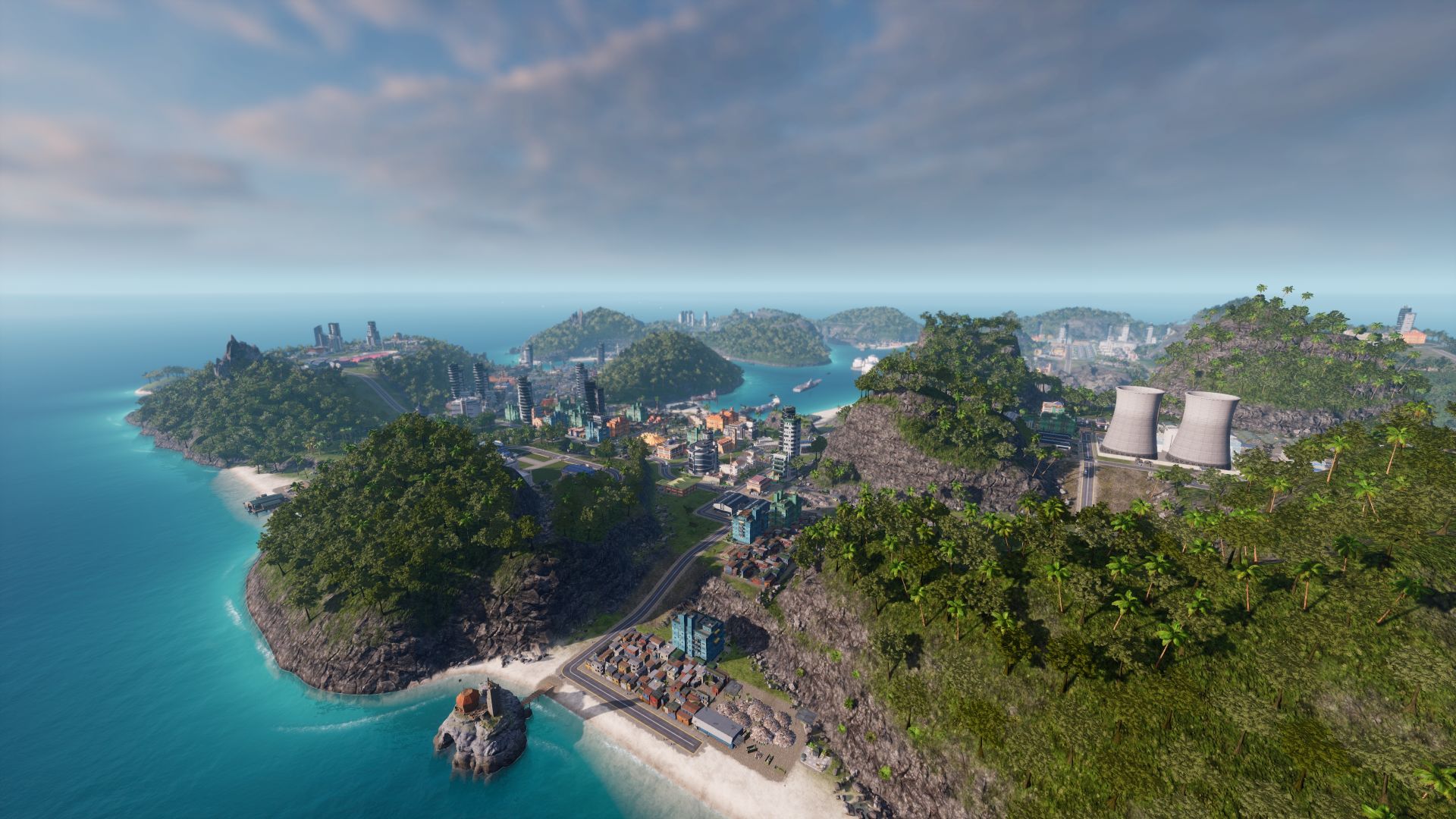 "Make no mistake – there’s a lot to manage in Tropico 6."

Choose the first mission and you’ll start in the Colonial Era, the first of four eras, as a governor looking to extend your mandate with The Crown. You build plantations, connect them by roads, take on various demands (with your choice of reward) and gain standing with the available factions. You usually have a mandate for each demand and over time, Dual Demands – where you must pick a faction’s needs over the other – will crop up. Research can eventually be conducted into various Edicts and to gain access to new buildings.

The Edicts themselves can introduce some relatively “interesting” twists to your game. Penal Colony will increase the immigration rate by 50 percent but also increase the chance of each immigrant being a criminal by a whopping 300 percent. Why is this beneficial? Because of the monthly payments to your corrupt regime, of course! Unlocking more Edicts is a matter of accruing knowledge by building libraries, colleges and schools.

Make no mistake – there’s a lot to manage in Tropico 6. You have to build bunk houses and apartments for your workers to properly commune to and fro. Providing them with fun and entertainment (taverns, circuses, restaurants, etc) that are also in line with their living conditions is similarly important.

Buildings can be upgraded to have different benefits or you could increase the overall budget allocated. Each worker in a building is its own separate entity and can either be hired from among the locales or brought in from abroad for a price. The overall happiness of your citizens which is determined by their livelihood, available accommodations, entertainment and actions taken by El Presidente. For example, taxing Capitalists will generally make them less enticed to vote for you.

Taking advantage of trade route offers for exports, purchasing licenses to expand on available routes, keeping the relevant Superpower happy (and hopefully doling out financial aid when you build an embassy for them) – these are all factors in ensuring your island prospers. You generally want to find a nice balanced approach, whether it’s building enough watchtowers to satisfy the Militarists or keeping emissions safe enough to ensure the Environmentalists aren’t on your back. Fortunately, each faction and Superpower has their own unique leader with some genuinely likable (and loathsome) personalities so these decisions don’t exist in a vacuum.

Another twist are the raids that can be conducted for specific resources. Building the most basic raid building, a Pirate Cove, can you net some treasure, new workers and items like fish and tobacco. Want to sabotage a Superpower? The Commando Garrison is the ticket and can be used to intimidate your neighbors as well. As raids are conducted, World Wonders will open up and can be built to confer even more benefits to your islands. Stonehenge will keep pollution down in an area while the Eiffel Tower provides increased range for radios and TV broadcasts, ensuring the propaganda flows far and wide on Tropico. Of course, the benefits they provide in terms of tourism and entertainment are also beneficial.

All of this contributes to your approval rating. Depending on how much your populace likes you, they’ll vote for you in the next election. Election Speeches make a return in this regard as you highlight your regime’s strengths, promise improvements in certain areas or just blame a rival Superpower for their invisible meddling. Clever writing – like fun being doubled and lack of fun being halved, thus ensuring four times the current amount of fine – make the speeches a treat. 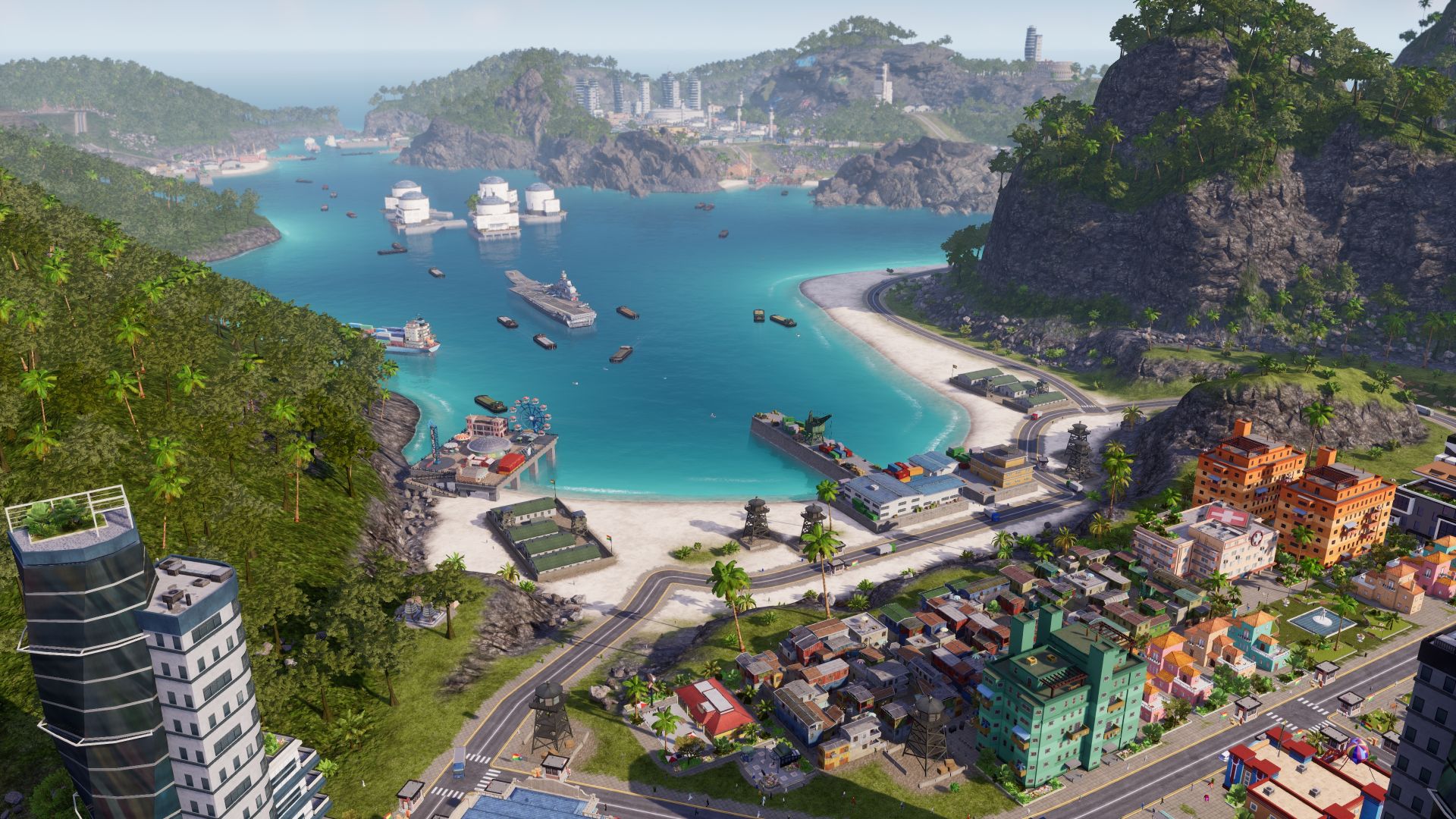 "If you want to stay in power through any means necessary, Tropico 6 will enable you quite well."

Managing all of the above is thankfully easy to the Almanac which indicates your ratings on Fun, Hunger, Happiness and whatnot while also indicating your approval rating among your citizens. You can also keep track of your spending, the standings of different factions and so on.

If you’re good to your people, then you’ll remain in power for a long time. But it wouldn’t be a dictator simulator without a bit of spice. Bring in the criminals, pay off the ballot, suppress the revolutionaries, put more funding into the military and kill anyone who has even the slightest inkling of rebellion. Different ultimatums can be issued by factions if you ignore their needs for too long, which can lead to an automatic loss. Revolts from an unhappy citizenry also crop up if your approval dips. If you want to stay in power through any means necessary, Tropico 6 will enable you quite well.

Admittedly, there’s a good range of options for building the banana republic of your dreams. Tropico 6’s pacing also feels well measured, neither too hurried nor too slow. Buildings generally don’t take long to construct (though you can increase game speed for your own convenience), interesting events occur at a decent clip and mandates feel fairly generous in the amount of time provided. I never found myself running out of building space or limited by the general design of the islands. And as such, you can always head into Sandbox mode to select a variety of different archipelagos with varying land mass sizes, along with the ability to adjust win conditions, starting populations and much more for your own taste. 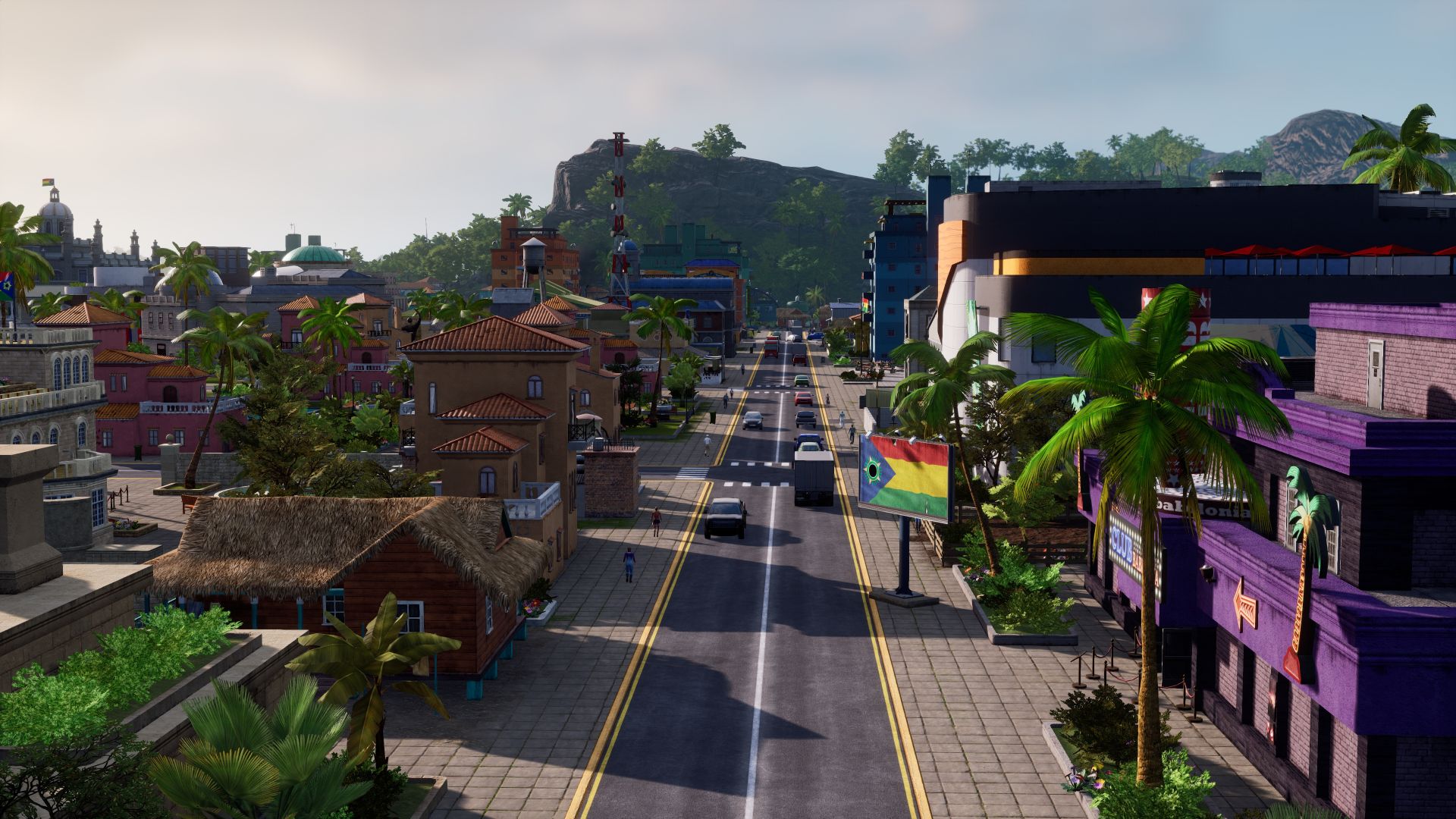 "What it does is cater to the faithful fan while opening up enough to new players curious to investigate all the fuss."

Interface design is relatively straightforward. It may take some time to know where everything is and to navigate different tabs to keep track of various resources but it’s easy to get a handle of. There are 15 maps in total for all the missions – it may not be the longest “campaign” but all of those maps plus an additional 15 are available for play in sandbox mode. The game’s mod support is still up in the air, unfortunately. If that’s a major factor, then you might want to wait for more information before making a purchase.

However, at it core, Tropico 6 offers enough value for money and so many ways to rule that it’s a blast to get into. It’s not reinventing the wheel when it comes to city-builders or introducing grand sweeping new features. What it does is cater to the faithful fan while opening up enough to new players curious to investigate all the fuss. It’s a smorgasbord of management, politics, transportation, violence, corruption and speeches that celebrates the insanity that the series is known for. Viva la Tropico, indeed. Just go easy on the killing every now and then.

Infectious Caribbean soundtrack and pleasing visuals. Multitude of approaches for ruling with traits to leverage, raids to conduct and expansions to make. Election Speeches return (and are hilarious). Dual Demands, factions and Superpowers bring some much needed personality. In-depth tutorial and solid mission selection.

Mod support is still unconfirmed. UI takes some getting used to. Not a major step forward for the franchise.

Final Verdict:
GREAT
Returning to what made fans fall in love with the series, Tropico 6 is an endearing, personality-filled city-builder that lets you think outside of the box. El Presidente has never looked this good, bribes or no.
A copy of this game was provided by Developer/Publisher/Distributor/PR Agency for review purposes. Click here to know more about our Reviews Policy.