No matter how much first person shooters grow and change and evolve, the simplicity of the adrenaline-fueled action that defined classics such as DOOM and Quake will never go out of style, which is why modern titles that swear by those design philosophies are always such as in attractive proposition. Indie team Trigger Happy Interactive’s upcoming shooter Turbo Overkill promises exactly that, against the backdrop of a vibrant cyberpunk setting, with the bells and whistles you’d want in a modern shooter. It’s a combination that has a ton of potential, as you might imagine, and to learn more about the game and how it’s shaping up, we recently reached out to its developers with a few of our questions about it. Below, you can read our conversation with Sam Prebble, founder of Trigger Happy Interactive and lead developer of Turbo Overkill. 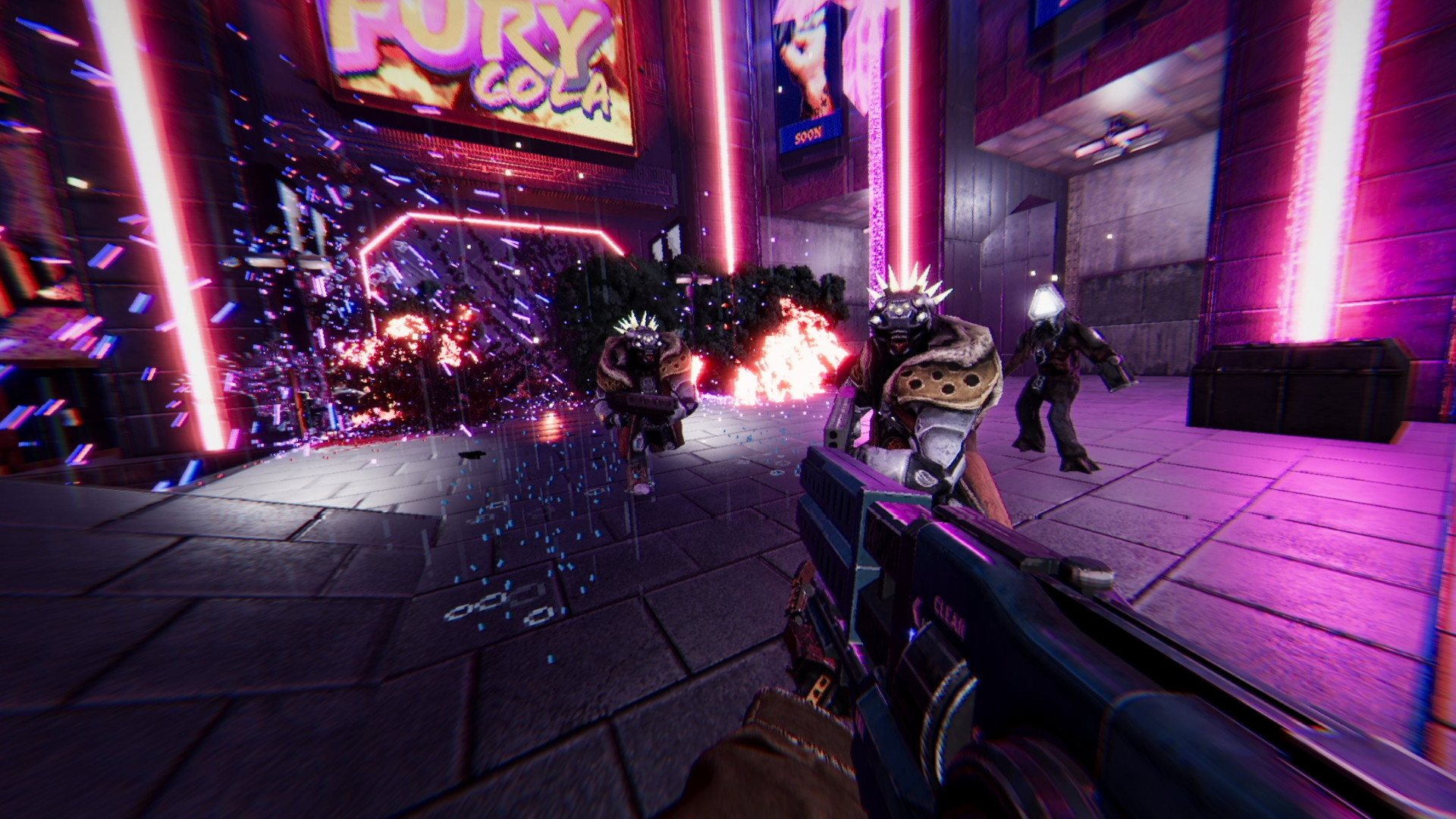 "The combat in Turbo Overkill is extremely frantic, sometimes even turning into a bullet-hell as you dodge incoming projectiles."

Turbo Overkill cites classic shooters like DOOM and Quake as its inspirations, but can you elaborate a little bit more on that? What’s the biggest way the game takes cues from the classics?

It’s mostly the simplicity. All that mattered back then was making the guns fun to shoot and enemies enjoyable to splatter. I wanted to take that formula from the games I grew up on and infuse it with mechanics from modern games I love. My background is mostly in making maps for Doom 2, ever since I was 6 years old. I always enjoyed the open-ended level design of Doom and Duke Nukem, along with the abstract level design of Quake. All that really mattered was having a killer gameplay loop combined with amazing level design. That is what I am hoping to replicate with Turbo Overkill.

The Hero Time mechanic sounds like an interesting concept, especially for a shooter that’s putting so much emphasis on fast-paced action. Can you talk about how it will impact combat, or perhaps even traversal?

The combat in Turbo Overkill is extremely frantic, sometimes even turning into a bullet-hell as you dodge incoming projectiles. Hero Time grants the players more room to think about what their next move is, like a brief relief from the chaos unfolding before them. It’s also satisfying as hell watching the gore and debris fly all over the place at half-speed.

Given that Turbo Overkill will also allow players to dash and wall-run, does that mean the game will also put some emphasis on parkour and traversal? Or are those moves primarily used for combat purposes?

A lot of the level design is extremely vertical, challenging the players to use a string of mechanics to traverse. Some platform sections have jump-pads linked to wall-runs, followed by dashing into another wall-run, all before leap-dashing straight into an elevated combat arena full of thugs. The moves are pretty seamless between traversal and combat. Dashing can obviously be used as a way of dodging projectiles, while wall-running can be used to reach the other side of a combat arena. Some weapons also provide traversal options outside of combat. For example, the Waster Shotgun’s alternate fire unleashes a burst of explosive plasma. Players can use the splash damage from this to not only gib nearby foes, but also as a rocket-propelled jump to get to a higher vantage point (or even a secret area in-between combat arenas). 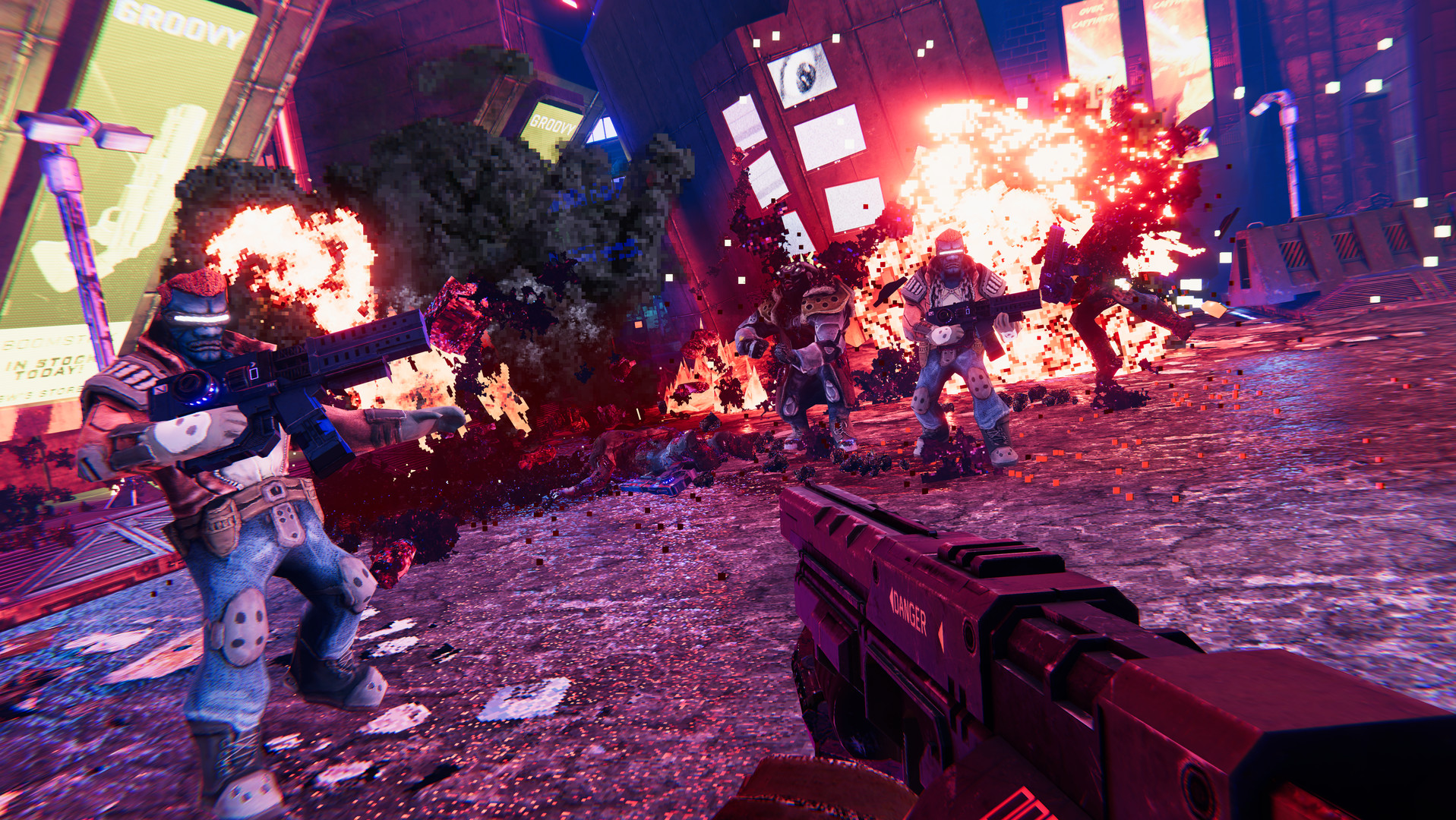 "A lot of the level design is extremely vertical, challenging the players to use a string of mechanics to traverse. Some platform sections have jump-pads linked to wall-runs, followed by dashing into another wall-run, all before leap-dashing straight into an elevated combat arena full of thugs."

Turbo Overkill’s cyberpunk setting definitely catches the eye, partly because there haven’t really been many DOOM-style fast-paced shooters in this setting. How does Turbo Overkill leverage its cyberpunk world for gameplay purposes?

One of the big gameplay features in Turbo are augmentations the player unlocks during the campaign. These include Grapple Hooks, arm-mounted Micro-Missile launchers, and the chainsaw leg, to name a few. I felt the cyberpunk setting was a perfect fit for these and many other mechanics. We’re throwing some pretty crazy stuff into this game.

What should players expect from weapons in the game where variety and design are concerned?

Each weapon has an alternate firing mode. The pistols can target multiple enemies for an instant headshot, the Boomer Shotgun can fire grenades, and the Twincendiary Minigun converts into a flamethrower. Each weapon has a use, along with pros and cons against certain enemy types. Some can even be used to extend the player’s traversal, like the Telefragger Sniper Rifle, which can target a faraway foe and teleport the player inside of them, causing them to explode in a shower of gibs.

The chainsaw leg is quite a unique concept that we don’t really see all that often. How did that idea come about, and how is it implemented in gameplay?

At the time I started prototyping Turbo Overkill, I was playing a lot of Apex Legends. I got a lot of enjoyment out of the sliding and momentum mechanics from that game and knew I had to implement it somehow in my prototype. Then I said, “hey, this should hurt goons as I slide into them,” and the rest was history. Naturally, the idea to go down the cyberpunk path stemmed from this.

Mechanically, the chainsaw leg (dubbed Chegg’s) works as a glorified slide mechanic. Speeding down slopes will increase the player’s speed drastically, and the faster the player moves, the more damage the chainsaw leg does to enemies. Players can also activate the leg mid-jump, providing an air kick boost.

Do you have any plans for co-op or multiplayer modes?

Turbo Overkill will come with co-op and deathmatch modes. Sliding into other players with the chainsaw leg was too fun to leave out. 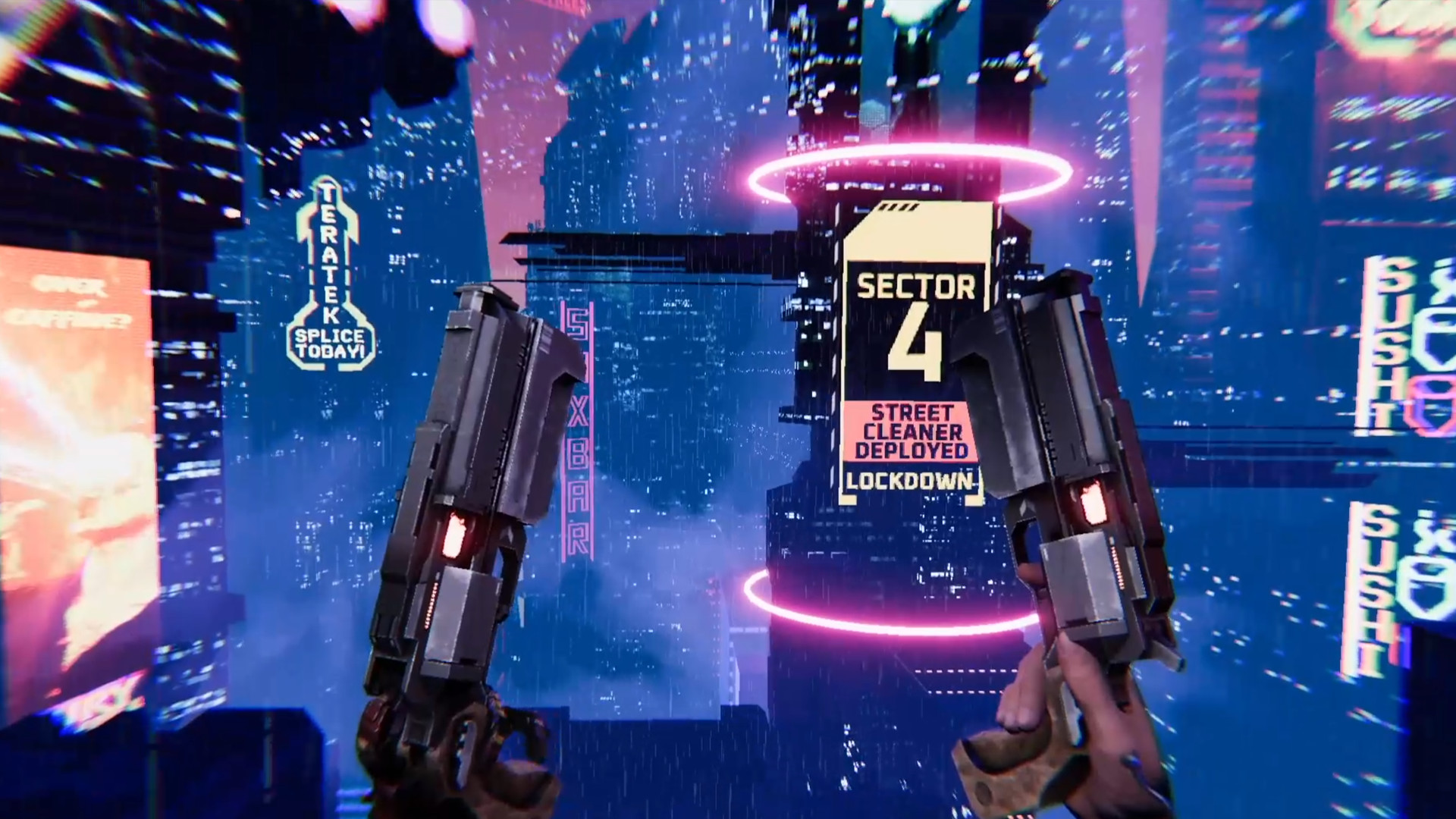 "We’re aiming for a 7-9 hour length, but there are a ton of secrets to be found which will bring players back for repeat playthroughs."

Roughly how long will an average playthrough of Turbo Overkill be?

We’re aiming for a 7-9 hour length, but there are a ton of secrets to be found which will bring players back for repeat playthroughs. One of the secrets players can find are Cassette Tapes. If the player finds all 3 of these in a single level, they will unlock a secret vignette level. These small sections range from platform puzzles to horde arenas and even remixed areas of main campaign levels.

It is going to be interesting to see what developers do with Unreal Engine 5 and Nanite. I imagine devs are going to push that thing to its limit with this generation of consoles, and with the file size of some of the meshes I’ve seen put into that thing… We definitely need the faster drives of this generation. But I haven’t had time to familiarize myself with the finer differences in new-gen SSD read speeds.

I’ve always favored smoother framerates over resolution. My home setup is a 240hz monitor at 1440p and it’s a blast to play on! You can still have visually impressive next-gen games at 1440p.

We are currently targeting 4k and 60FPS for PS5 and Xbox.