Turbo repetition to the max!

Turbo Super Stunt Squad is the official video game for DreamWorks animated-film Turbo. Unfortunately, I haven’t seen the movie so I can’t say much on how it compares to the game. However, the easiest way for me to describe this game is that it’s Tony-Hawk for kids.

Turbo Super Stunt Squad is presented quite well. The game has decent graphics and tries to match the movie’s art-style, however; it’s nowhere near the animation quality compared to the movie, which is to be expected. The soundtrack is pleasant, not annoying and fits the game well. The main menu is simple and goes well with the overall look and feel of the game. Although, the game has nowhere near the quality of a triple-A title when it comes to the presentation, but for a movie-licensed video game, it’s acceptable. 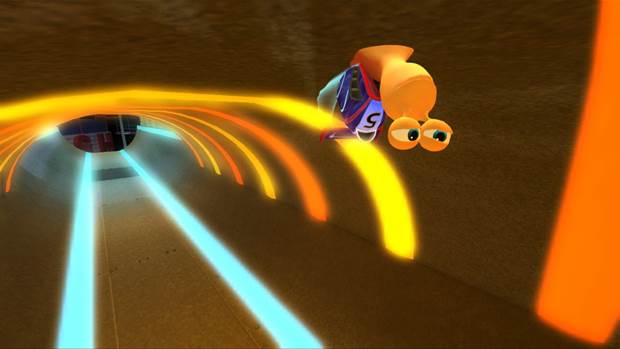 "It’s almost impossible to complete every single objective in a level, therefore, players must replay levels multiple times and hunt down objectives every time they replay the level. "

When you begin the game, you will also be able to choose different snails/characters to play as. Each Snail has different racing/stunt attributes and of course looks. However, if you want to fully finish everything in the game, you must play all the snails and complete every single objective on every level. Performing stunts in this game is quite similar to how you perform stunts in skateboard games. However, they’re much more simplified and the game is much more about collecting and completing objectives than actually performing stunts.

In one of the levels, I had to collect letters that would spell out Turbo’s name that were scattered all throughout, and it was my job to figure out how to get them. I was also timed to do this task along with other tasks. In Turbo Super Stunt Squad, you can play the levels in Free Mode or Timed Mode, but the majority of the objectives will be in Timed Mode. 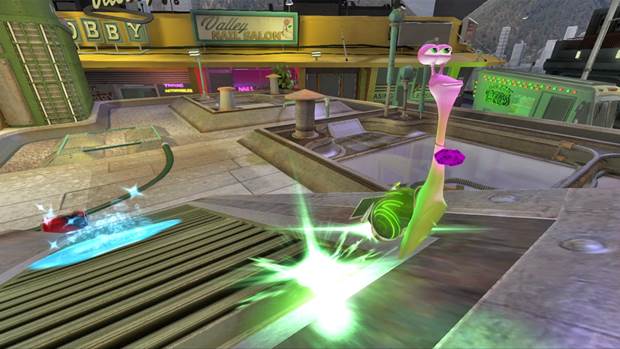 It’s almost impossible to complete every single objective in a level, therefore, players must replay levels multiple times and hunt down objectives every time they replay the level. Completing every single objective can be somewhat annoying and become boring, especially if you keep failing to do so. Meanwhile, the Free Mode allows players to roam the levels freely and find other required collectibles.

"If you don’t mind playing movie licensed games, then Turbo Super Stunt Squad is actually not a terrible choice since everything is quite simple in the game to accomplish if you’re willing to go through it."

As you unlock objectives, you unlock more levels to play in. Unfortunately, Turbo: Super Stunt Squad only has a total of 5 different levels to play. Once you’ve played as all of the Snails and accomplished all of the objectives in every level, then there is not much left to do. The game doesn’t have much replay value, and the lackluster local only multiplayer mode doesn’t help it either.

The achievements in Turbo Super Stunt Squad are quite simple. The achievements range from completing the tutorial level, finishing your first objective, unlocking a new level, completing a certain amount of objectives with specific snails and of course finishing every single objective in every level as every snail, getting all the upgradeable unlocks and so on. 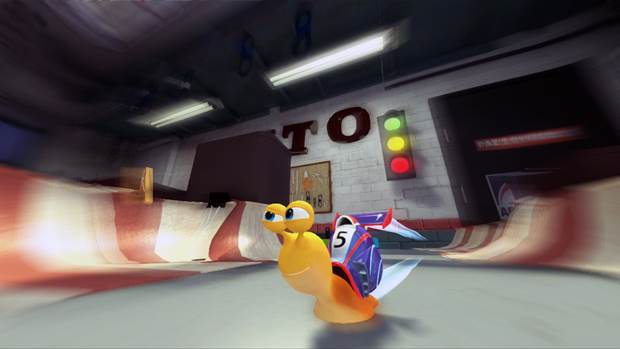 If you’re enjoying the game and playing it as it must be played, you will easily net your 1000 gamer score in about 10-15 hours. If you don’t mind playing movie licensed games, then Turbo Super Stunt Squad is actually not a terrible choice since everything is quite simple in the game to accomplish if you’re willing to go through it.

" It’s hard to recommend Turbo Super Stunt Squad, but if you’re looking for a game to keep kids busy then it might do the job."

Turbo Super Stunt Squad is a decent movie-licensed game. However, the repetitious gameplay flow and only 5 levels to play can easily get you bored quickly, despite the game’s decent presentation and soundtrack.

Nice presentation, collecting stuff in the game is fun, good soundtrack and voice acting, decent use of a licensed movie.

Local multiplayer only, repetitive gameplay, unexplored potential of the concept

Final Verdict:
FAIR
Decent movie-licensed video game that has repetitious gameplay. I only can recommend a rent and not much else, due to the fact that the game doesn't have much content to offer.
A copy of this game was provided by Developer/Publisher/Distributor/PR Agency for review purposes. Click here to know more about our Reviews Policy.