Nintendo, Sega, Atari, Sony, and SNK have all gotten their own officially licensed versions of the mini or classic console. These small recreations of classic consoles from said companies have the convenience of HDMI outputs, new controllers, built-in games, and relatively friendly price tags and have succeeded in boiling down their libraries into a healthy handful of quintessential titles to varying degrees.

Obviously some of them have turned out to be better than others for various reasons, With more and more companies looking to get involved in the mini console scene, Konami has now tried their hand as well with the Turbografx-16 mini.

There is also a PC Engine mini for Japan and a Core Grafx for European markets, respectively, as those were the names for the machine in those regions. This was an idea that was perhaps impossible for the company to not consider trying, as Konami finally absorbed Hudson Soft completely a few years back, and all the intellectual property that came with that, combined with what Konami already owned, already made up a huge chunk of the games that were on the Turbografx-16 anyway. On top of that, with Konami already well into the swing of releasing several collections of their older games, a mini console for the never-quite-totally-forgotten Turbografx and PC Engine does make a lot of sense.

One of the biggest names emerging in the officially-licensed emulation scene is M2. M2 has actually been around since the early 90’s and initially made a name for themselves by handling important ports of games like the port of Gunstar Heroes, a rather demanding game, to the Sega Game Gear. In fact, they’ve had their hands full from porting games to consoles that you wouldn’t think would be able to handle them ever since. Bringing legions of intense arcade games to various Sega consoles, PCs, Nintendo consoles, and the Playstation just scratches the surface of what they accomplished in the last 20 years or so. Lately their bread and butter has been largely consisting of Konami’s Castlevania, Arcade Classics, and Contra collections that have been released for modern consoles, as well as handling the emulation of the games on Sega’s recent Genesis Mini.

Overall, the work that M2 has done on these games has been quite good and a far cry from other companies. Well, the catalogue of M2’s work is about to expand to include the over 50 games that will live on the Turbografx-16 and PC Engine Minis. As their track record clearly indicates, this is a good sign that the games will be handled well on the system and thats always important for these retro games. Frame rates, sound effects, music, and image quality are sure to be scrutinized down to the bone, so knowing that M2 is behind the wheel should be encouraging news for anybody wanting an authentic Turbografx experience.

Save states are also a wonderful thing. Back in the days of chip tunes and parallax scrolling, most games required many hours of attempts, restarts, and lots of memorization to get through in that one perfect sitting. Now, most of the folks who these mini/classic consoles are aimed at have full-time jobs, so using features like save states are a wonderful way to bookmark their progress in a game, turn it off, take care of their adulting, and return to Ninja Spirit right where they left off instead of having to start it over like you would on an original system. This is a huge advantage that the Turbografx Mini has, and with several save slots for every game, this could be a huge deal for anyone who wasn’t able to finish Bonk’s Revenge and would now like an official way to do so.

As we touched on before, the Turbografx Mini is an officially licensed machine. The games on the system were put there by the companies that own the rights to them, and the machine itself has every right to exist. This avoids several things. Firstly, since it’s a real machine released by a real company with quality control, it will work properly. The games will run as intended, the features will work as they should, and you will have that authentic experience.

The Turbografx Mini also avoids the hefty price tag that generally accompanies amassing old console systems, controllers, and games. While all retro consoles can fetch high prices depending on the market, the Turbografx in particular is one of the pricier ones- likely due to the limited production of the console.

As such, the games are also about as expensive as any library of 16 bit games could ever be, with many of the systems more average games currently commanding several hundred dollars from prospective buyers. While the mini is 100 bucks, and while that is more than most other mini or classic consoles, that’s still a bargain compared to the half-a-grand minimum you would likely have to drop in order to have a respectable, authentic, Turbografx collection. If you keep this price difference in mind, then just having access to a couple of the rarer games on the mini like Lords of Thunder and Densetsu Sapphire make buying the system pay for itself instantly. 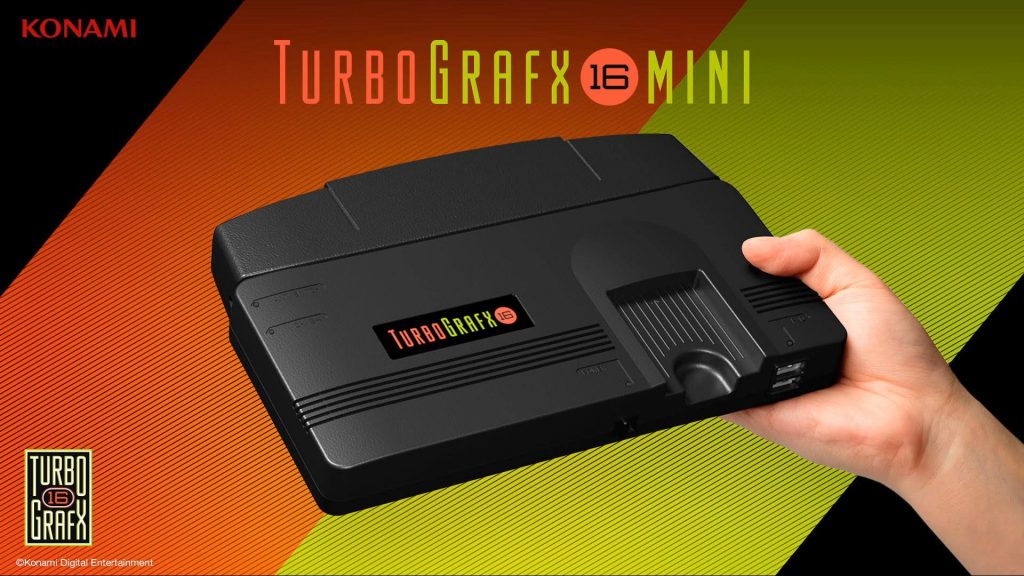 Another nice thing that companies like M2 have been throwing in to these mini consoles and collections  are some nice visual enhancements and effects that accommodate various preferences and make the systems worth toying around with a bit. On top of the save states that we already touched on, the Turbografx mini will have a few other optional features like aspect ratio controls, japanese versions of some games, and a scanline toggle to simulate that old school CRT look. These certainly aren’t things that need to be messed with, but their inclusion is a nice sign that M2 and Konami want to give these games the attention they deserve and give the players the ability to play them the way they want to.

On top of all this, the thing that matters most at the end of the day is the games. While the Turbografx-16 mini is mysteriously missing some crowd favorites like Bloody Wolf and the Legendary Axe games, it does have a very nice slice of the main thrust of variety that the Turbo’s library was going for. The first two Bonk games, Splatterhouse, Air Zonk, Blazing lazers, and Alien Crush just to name a few.

These are outstanding games that were wildly underappreciated- especially in the west- during their time. Now gamers of all ages and pursuations will have an easy, cost effective way to officially experience them.