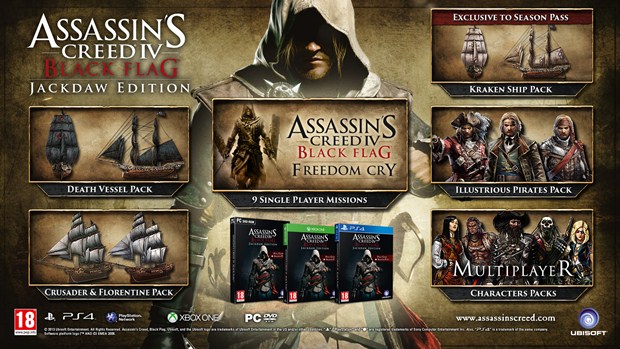 Assassin’s Creed IV: Black Flag was a great game. So naturally, Ubisoft decided to exploit it with DLC and post release content to the maximum extent possible.

But now they are at least having the decency of compiling all that DLC for us, and putting it together in one neat little package, Assassin’s Creed IV: Black Flag Jackdaw Edition (because it should never be too easy to enunciate the full name of a game) on the Xbox One and the PlayStation 4.

Assassin’s Creed IV: Black Flag Jackdaw Edition will include, among other things, the Kraken Ship Pack, the Death Vessel Pack, some multiplayer DLC, and perhaps most importantly, Freedom Cry, which follows the story of Edward Kemway’s first mate Adewale. Freedom Cry was great, and the other stuff included isn’t half bad either, so honestly, I’d look into getting this version of the game if you haven’t already jumped in.