So AC3 could have had four explorable main areas? Interesting... 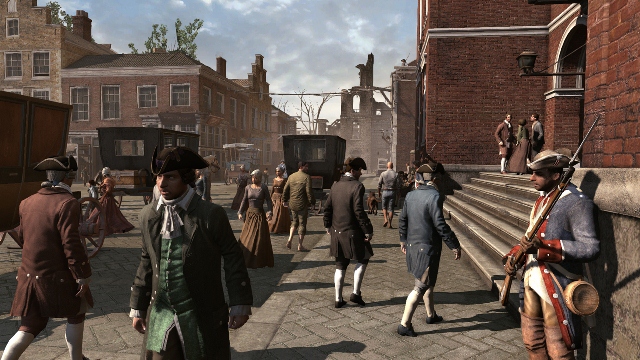 Anyone who’s studied American history, or, well, played Assassin’s Creed 3, would know that Philadelphia played a very important role in the American Revolution.

Maxime Durand, AssCreed 3’s historian says the dev team almost included the city in the recently released action adventure title, but decided to not do so in the end because the layout of the city in the late 1700s would have resulted in some very “boring” in-game navigation.

“So there are thousands of things we were really happy to fit in the game, such as people opening windows (because they use to throw their chamberpots) or all the military stuff,” said Durand on a Reddit Q&A. “But one of the elements which did not make it was a big chunk: Philadelphia.

“Although there was a lot of historical evidence to recreate it, it would have been technically ugly. At the time of the Revolution, the city was mostly made out of a grid. Imagine how boring navigating through that would have been, with no points of orientation… Also the loading on a street that stretches for kilometers would have been problematic.”

What do you think? Would you have preferred if AC3 had had another region you could explore other than Boston, New York and the Frontier?

Tell us in your comments!