Umbrella Corps does little to prove it’s not just a cash grab.

Remember when Resident Evil was a horror franchise? Me neither. Still, Capcom’s latest game based on the popular series goes out of its way to assure you it is not a Resident Evil game at all. Umbrella Corps is merely “based on” Resident Evil, you see? It takes several ques from Resident Evil such as locations, weapons, and a few character skins, not to mention the T-virus zombie monsters and such. Capcom seemingly lacked the confidence to call it a Resident Evil game, but also wanted the cold hard cheddar that would come from those two words.

Compared to previous Resident Evil games, Umbrella Corps follows in Resident Evil 6’s over-the-top action footsteps for better or worse that so many fans despised. Even held to its own standards, it’s little more than a generic shooter, using the iconic franchise as a crutch more than anything.

Umbrella Corps’ focus is on multiplayer. It’s a team based, tactical shooter (as tactical as an online console game can be, anyway) which pits you and two teammates versus three others in arenas full of zombies. There are only seven maps and two modes: “one life” in which you get one life per round, and “multi-mission,” which sets different objectives per round.

One life mode is by far the better option. It’s a lot more tactical than the multi-mission mode, and you’ll have a better chance to play with some of game’s systems like cover shooting and, well, just cover shooting.

The multi-mission mode highlights Umbrella Corps’ many flaws. Every game typically plays the same. You and your team start slow, crouching around and checking every corner. After the two teams make first contact it turns into a free-for-all deathmatch where the objectives are ignored by all.

Aside from the objectives being dull as dishwater and all amounting to the same “kill this person, or this zombie, or this group of zombies,” there’s one over-powered weapon that brakes the balance. It’s a melee weapon called the “brainer.” Equip it, and you become king of Death Mountain. It’s an instant one hit kill weapon that gives you a lunge ability once you lock on to targets, and makes you briefly immortal once you strike an enemy. Needless to say, this attack is spammed ad nauseam.

"Visual design is sorely lacking. Each environment looks the same, and obstacles blend in to muddy backgrounds making them hard to see until you run face first into them."

What makes the brainer all the more deadly is the atrocious camera system. The camera isn’t placed over your shoulder so much as it is shoved into the back of your avatar’s neck, and the field of view is minimal. This results in the player character taking up close to a third of the screen, leaving you vulnerable to someone busting up beside you with a brainer.

The game has a hard time keeping games fair in other ways too. Lower level players are regularly matched together, against a team comprising of people ranked level 30 or above. Whenever you’re killed, the game will often spawn you in front of or behind the entire opposing team, who are still teabagging your corpse.

Visual design is sorely lacking. Each environment looks the same, and obstacles blend in to muddy backgrounds making them hard to see until you run face first into them. One map in particular, Raccoon City, is especially bad for this. Its night, and there’s a constant rain effect that looks more like hail. Visibility is so poor in this level, everyone generally runs to the center of the map to stab each other in the face, or camp in the starting areas.

There are zombies in every match, one more loose thread desperately tying Umbrella Corps to its big brothers. They’re inclusion is the one thing keeping this from being the most generic shooter in the world, though their implantation is questionable. 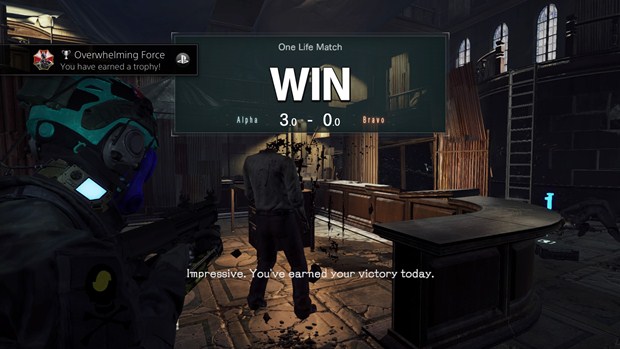 "Umbrella Corps is a very confused game. Its design is scattershot, with as many traces of Call of Duty’s frenetic action with Counter Strike’s slower pace."

Everyone has a little zombie pacifying shield that makes them harmless, but if this shield gets damaged (which happens by taking too much damage) the shield goes down. The zombies will be standing around looking bored one minute, and the next literally all of them swarm you from every corner of the map. It’s striking to watch in spectator mode, as your teammate mows down two enemy combatants only to be killed by a zombie dog they either couldn’t see, or didn’t realize was suddenly a threat.

Umbrella Corps is a very confused game. Its design is scattershot, with as many traces of Call of Duty’s frenetic action with Counter Strike’s slower pace. There’s the aforementioned cover system which should allow you to dodge out of the way of enemy shots, and the game is more than happy to highlight every single cover opportunity with a bright blue border as you walk by. However, you have so much health you can tank gunfire to a ludicrous degree, rendering cover, grenades, and sniper rifles pointless.

This would be fine if matches were designed to be fast-paced, but they’re not. The one life mode is a slow experience since everyone’s so afraid of death, and because its broken up into rounds. But the multi-mission mode is round-based too, meaning after each objective, control is wrestled away from everyone and you’re set back to the starting locations. This always happens as the match begins to heat up, and destroys any sense of flow and rhythm in the combat.

The biggest shame is that some of these mechanics work well on their own. Shooting is tight, and popping in and out of cover is fluid. You can slowly inch a door open, poking out your gun the whole way, or kick it down like a badass. Going into first person to aim feels natural, and almost makes up for the terrible third person camera. But the game on top of those mechanics is at odds with itself, unsure if it wants to be fast and twitchy, or methodical, team driven and objective based. 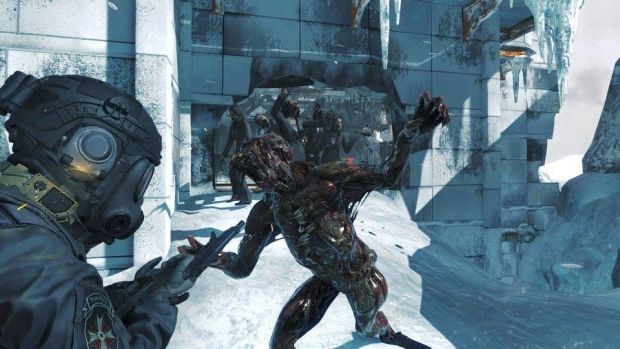 "There is a single player campaign, called “The Experiment,” but it’s not worth writing home about."

There are multiple customization options as you’d expect from this kind of game. You can change your armor color or unlock different skins. You can change your guns as well, decking them out in a bright pink paint job or putting scopes and suppressors on them. Interestingly, despite the armor changes being cosmetic, they’re far more important weapon customization. Guns are easy to aim as it is and you can’t change their damage output, and everyone uses the brainer anyway. All the character models in the game are identical, making it impossible to discern friend from foe at first glance.

There is a single player campaign, called “The Experiment,” but it’s not worth writing home about. Each level is the same: you have to kill zombies and collect 20 DNA samples. There is a story of sorts, but it’s short, communicated entirely through text, and is so poorly written you have to wonder if Capcom tacked it on at the last possible minute.

Umbrella Corps’ biggest problem is its lack of variety. It tries to ape every popular online shooter without contributing any new ideas of its own. It represents everything wrong with the video game industry from five years ago: a once beloved franchise turned it into an online shooter crammed with cover based shooting, pointless customization, a lazy single player mode, and overpriced cosmetic DLC.

There are solid shooting mechanics buried here. The one life mode is fun if you’re lucky enough to get a decent team. Mindlessly running around shooting and stabbing people can feel satisfying if you ignore objectives.

There’s no variety. With seven maps and each objective being the same, you’ll run out of new things to see in a handful of matches. Your customization options are limited, and are cosmetic only. The melee “brainer” weapon is over-powered, made worse by the camera saddling you with a massive blind spot. The zombies switch between pointless and deadly at the drop of a hat. Bad graphics, muddied visuals, and annoying UI elements will leave you confused, and the terrible dubstep is headache inducing.

A copy of this game was provided by developer/publisher for review purposes. Click here to know more about our Reviews Policy.
Tagged With: pc, ps4, Umbrella Corps