Nathan Drake is back again for another treasure hunting experience but instead of his family member, Sir Franchis Drake, he is after an artifact of the Marco Polo expeditions while always getting shot and always trying to impress the ladies (*cough* Chloe and Elena). This is a lot like the great Uncharted: Drake’s Fortune with a few tweaks here and there but with the exploration of the city of Nepal, shattering ice caves, and of course the beautiful jungles. These are the best visuals I have seen in a game to this date.

Nathan Drake starts off this game looking for another artifact that holds special powers (sound familar). But this time you start in the future and then go to the past to see how you got into this situaltion. When it flashes back it shows you meeting your friend Harry Flynn, who says this rich, crazy guy wants this piece from this museum in Turkey. Nate then figures out that this artifact can be traced back to Marco Polo. The voice acting is phenominal and makes you just feel that much closer to the character. Nate just reminds you of that regular Joe, that is why people feel so close to him. The cutscenes are great and there are plenty of them, However, they are not long and boring. They are fast paced and very interested. However, some of the cutscenes towards the beginning of the game seem like they don’t look near as good as the actual game does. But all this together helps create it to be a great adventure game.

The chemistry between Drake and Chloe is amazing

Nate has to do a lot of thinking and a lot of kicking butt from fighting off “bad guys” to figuring out puzzles to jumping over the bottemless pits of doom (mwuahahaha). Nate has a great supply of weapons from just taking down numerous enemies, throwing grenades (easier than Uncharted: Drake’s Fortune) at their feet and watch them go soaring. Or you can just go up close and take them down like a man. You can fight them with the square button with a counter to finally take them out, or you can use the well implemented stealth system. To do this, just sneak up behind some of the enemies and press the square button. You will choke them out, throw them into the wall, smash their head into the wall, and more much.

This wouldn’t be an adventure game without some “leaps of faith” (Okay, this isn’t Assassin’s Creed). But you get to shimmy dangerous ledge, swing from ropes, climb up traines dangling over the edge of a cliff, and make crazy jumps. You get to even leap on moving cars.

Remember the easy puzzles from Uncharted: Drake’s Fortune. Well this time around, you get some puzzles but they aren’t as easy, but still easy indeed. They might make you think a little bit. For instance, remember in the first game where you would have to open your journal to see the clues to figure out the puzzle, well you have to do it again but this time around, your clues might be through different pages.

Uncharted 2: Among Thieves has an good story, which the story keeps moving and making you want more and more. You will never be in a section for to long, and even the levels that seem like you don’t have much choice, they give you more than one. For example, when you are on the train taveling through Nepal and shooting enemies, you have to sometimes climb on top, through a window, just go through it, and much more.

It has great gameplay, story line, but that is not all. The graphics of this game are by far the best I have seen on consoles. You travel from the amazing snow covered locations, to lush jungles with light shining through the trees and the light shining on your body, to a city that is falling apart, and all the locations that the adventurer Nathan Drake will take you. Also with the graphics of the game, there are great animations like when Drake is shot and stumbling through the snow just trying to get to that particular place to him jumping and barely making on the ledge and almost falling off. Like I stated before, the characters great voice acting just making you that much closer to the characters, and what they say to each other just makes them seem much more real. In the jungle, you wil see monkeys run away and squirrels run up trees. When you enter the water, for instance, when you get waist deep, and you get out of the water, your clothes will be wet as far as you went down into the water. The frame rate is not an issue at all even in some hectic shoot-outs. There are many more details that make this game what it is. All of these little details add up to be a lot. 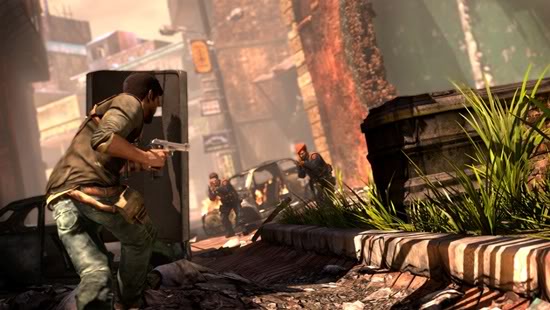 The visuals are the best on a console

Now the multiplayer is quite fun as well. If you like the campaign levels and want to do it with friends online. Then there is a 4-player co-op. It places you in levels from the game and you have to take down enemies to complete the main goal of the quest. Also there is a competitive mode with game modes including deathmatch, capture the flag, and territories. The stealth action hiding behind walls or running-an-gunning is what this game is about. I have experienced some crazy moments where you are getting shot at and someone is chasing you and you hide behind a wall and come back around them and shoot them in the back. The muliplayer is just addicting.

Now you might notice that I put the cover system can get a little annoying. Well this is because you try to hop over the wall and hop over something else, or hide behind a wall and hide with your back to the enemy expossing everything to them. But it is not that bad so don’t take it the wrong way. It is just sometimes. However, the cover system is an important aspect of Uncharted. However, the levels are designed for you to position yourself strategically to change the battles anyway you like them. For instance, you can move sometimes to a higher or lower ground, or move farther to closer to take out the mercs.

So you who thought the campaign wouldn’t be as good as Uncharted: Drake’s Fortune because they are working on multiplayer are wrong. The campaign is longer, the graphics are better, the same great people from the first game, and the mulitplayer has lived past our expectations. However, just the controls sometimes will get you killed sometimes, but this is a slight flaw and may not be noticable. But Uncharted: Among Thieves is a great game and something is wrong with you if you don’t want to play this game.

Cover system can make you mad on harder difficulties.

Final Verdict:
EDITOR’S CHOICE
And we thought Uncharted: Drake's Fortune couldn't be outdone
A copy of this game was provided by Developer/Publisher/Distributor/PR Agency for review purposes. Click here to know more about our Reviews Policy.