Updates to Xbox Live and Xbox.com landing this week

This week we’ll see a few minor alterations to Xbox.com and the Xbox Live service in general. Details are below:

On Wednesday, January 19th there will be a mandatory dashboard update that (re) enables the ‘Boot to Disc’ option in the Xbox 360 dashboard. After you accept the update, you’ll be able to set the option to boot to the Xbox 360 dashboard OR directly to the game you have in the tray when you power up your console. This option can be found in the System Settings.

Additionally, on Thursday January 20th an update will be made to Xbox.com that slightly alters the appearance of Gamercards. The Gamercard look and feel has been updated and gamerzone has been removed from the card. Other than that, the same amount of information is on the card. Example below: 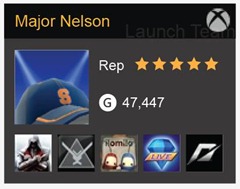 Thanks to Major Nelson for the info