V-Rally 4 Review – Dead In The Mud

This poorly-designed rally racer is best left behind the starting line.

Parisian game developer, Kylotonn, has a long history with racing games. Their most well-known work like the World Rally Championship franchise and Motorcycle Club are bland but inoffensive titles usually suffering from a distinct lack of depth, but each have a faithful following.

So, I can’t really wrap my head around why they chose to skip their yearly WRC release to revisit such an old IP, but they nevertheless aimed for nostalgia and dumped their development time into V-Rally 4, a sequel in a franchise that’s been dead for almost two decades. And unfortunately for V-Rally 4, 2002’s third entry might have been the best place to wrap things up.

V-Rally 4 comparatively offers a bit more of that depth than Kylotonn’s other games, but it comes at the expense of efficiency and ease of use. An overabundance of menus and messy navigation gave me a less than stellar first impression of the game. It throws immense amounts of information at you early on through the use of these cumbersome menus, negatively overwhelming the senses and setting the tone for the remainder of the gameplay experience. 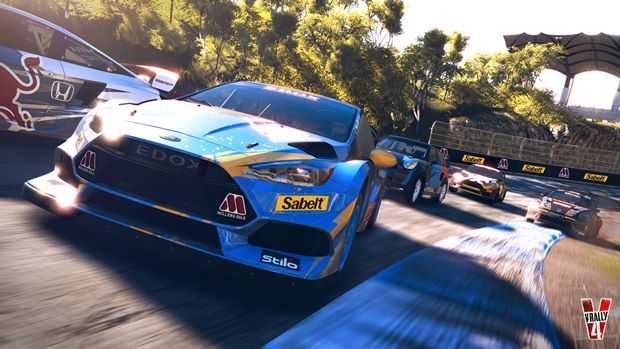 "There’s a fun selection here across cars and buggies. But unlike better games in the genre, you’re forced to purchase slower, clunkier cars before accessing faster, better ones."

Once I worked through the tortuous menus, I was greeted with an expected career mode that spans a multitude of events and championships. While navigating V-Rally 4‘s career mode isn’t always the easiest thing to do, I found its attention to detail one of the more appealing aspects of the core design. Built around the management of teams, sponsors, and keeping vehicles in working order, the game really dives into its sim aspects. Concepts like paying repair bills might sound mundane on paper, but it at least gives the game a genuine sense of integrity in regards to its dedication to the sport of racing.

Not all is well here though, because V-Rally 4 decides to derail that attention to detail with a haphazard method of doling out events. There’s no discernible path of progression, instead offering a seemingly thrown together collection of icons and events to undertake. Like its irritating menus before it, V-Rally 4 just doesn’t seem interested in being user-friendly or aesthetically welcoming. I always felt lost, not empowered to forge a path forward.

This continued frustration can also be seen equally in its car acquisition. There’s a fun selection here across cars and buggies. But unlike better games in the genre, you’re forced to purchase slower, clunkier cars before accessing faster, better ones. I spent a lot of my early hours with V-Rally 4 irritated at this choice rather than enjoying its fairly decent upgrade and engineer systems that see you managing basically every meaningful element of your team.

Still, I grinded through its mundane low class races against an infuriatingly erratic difficulty that pits you against what feels like unavoidable guesswork. It’s almost impossible to understand the game’s AI design, with some races being outrageously simple and others damn near impassable. Sometimes cars would fire past me and leave me too far behind to bother even trying, but a few races later even the game’s loose and wonky controls weren’t enough to keep me out of the lead.

Its vague difficulty rating system does almost nothing to alleviate this annoyance and might actually just make things even more confusing. By the end of my time with the game, I was so exhausted with its disorienting layout that I had no idea what I had accomplished or how it led me to where I was. 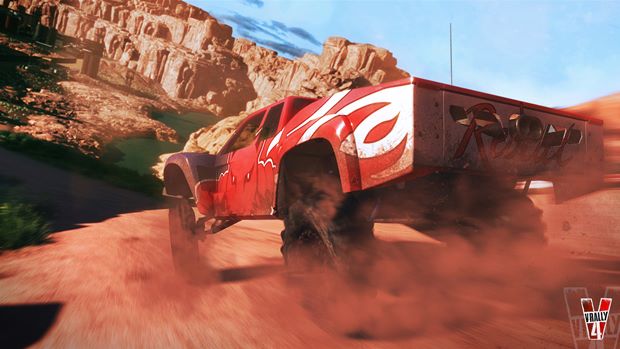 I wish I could say things get better, but V-Rally 4‘s gameplay is its most unfortunate failure. When coupled with the aforementioned difficulty confusion, the game truly falters thanks to poor, clumsy handling and physics that feel like they were programmed overnight. Unlike its AAA peers, it’s simply jarring to play. Cars slip and slide along so loosely that I felt like I was more at odds with my controller than the other racers.

Its very straightforward rally stages are its core pillar, and I actually found the other modes intolerable. While having a variety of race types is a welcomed concept, none of them feel designed for the game’s slippery controls, so I found myself failing them more often than not. This is enraging considering how much time I’ve spent succeeding in other similar games. It’s not fun knowing that the game itself is artificially difficult and ruins the moment-to-moment experience with its own controls.

There is no better example of this than V-Rally 4‘s Extreme-Khana, a stunt-focused mode that sees you barreling through structures and arguing with the controller to make jumps and tight turns. It’s a fun mode when you manage to get lucky with the steering, but I wouldn’t consider luck a good indication of a genuinely solid gameplay experience.

Sound design is equally as bad. I don’t know what Kylotonn’s budget was, but it seems they blew it all on a single, obnoxious track that plays ad nauseum on menu screens. This abrasive rap-esque track eventually become so unpleasant that I had to turn music off altogether. The game bugged out multiple times and reinstated the music though, so I eventually had to mute the television outside of races. Car sounds and other effects don’t fare much better either, with buzzy engines and crinkly crashing sounds. It’s all very rudimentary for a modern racing game.

Similarly, V-Rally 4‘s graphics are an abhorrent mess. Muddy textures, low-resolution text, and an overall pedestrian aesthetic brings little life to its already mediocre courses. Even its opening cinematic is a low-resolution and blocky affair full of artifacts that would look terrible for a last generation game, let alone something this far into a console cycle.

Performance is solid, at the very least, but this is likely due to just how little time was spent on the game’s visuals. It doesn’t really matter if the game runs well if the time spent with it is such an ugly, uninspired disaster. Nevertheless, I didn’t experience any noticeable framerate issues or screen-tearing. 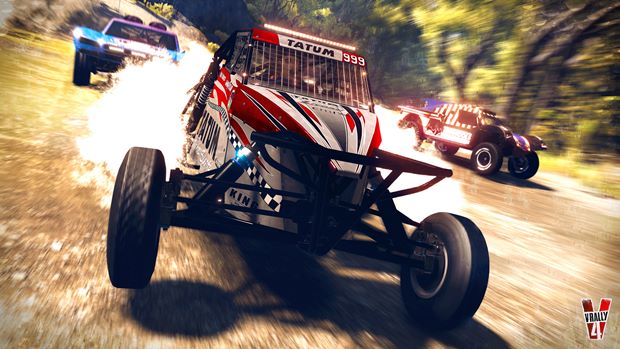 "This rally game is dead in the mud, so I’d suggest you steer clear."

I also appreciated the attention to damage details. With an interesting repair system in place, the excellent damage design creates a cool visual element that translates directly into gameplay and money-management. Few racers pull this off well, so it’s surprising to see an otherwise below-average game succeed in this department.

The online mode barely functioned during my time with V-Rally 4. I managed to get into a single race, but the opponents left about a minute later and I was booted back to the menu. It does at least offer both quick matchmaking and a lobby system for hooking up with friends, but my guess is that there simply won’t be a community following large enough to sustain the online mode much past release.

If you dig deep enough into V-Rally 4 you can see the bones of a solid rally racer, but the meat of the game is too poorly executed to sustain fun. The game almost succeeds in areas like car selection and track design, but it manages to even muck that up with silly design quirks that reduce the ability to engage with these aspects enjoyably. Most importantly, a racer is only as good as its controls, and V-Rally 4 fails miserably at granting the player any semblance of consistency there. This rally game is dead in the mud, so I’d suggest you steer clear.

V-Rally 4 requires immense suffering just to eke a modicum of enjoyment from its frustrating, archaic game design. The few things it does right is not remotely worth the price of admission.

A copy of this game was provided by developer/publisher for review purposes. Click here to know more about our Reviews Policy.
Tagged With: Bigben Interactive, Kylotonn Entertainment, nintendo switch, pc, ps4, v rally 4, Xbox One