A cluttered vampire visual novel whose bright spots are muddy.

Becoming a vampire should be one of the most freeing things a person can experience. As long as you avoid the sun, you can do almost anything you want without fear of death since, well, you’re already dead. With Vampire: The Masquerade – Coteries of New York, there’s a lot of that freedom to choose to act how you want and complete quests when you want. Unfortunately, there’s a lot of clutter that overshadows the few interesting characters and intriguing narrative arcs it presents. It’s a solid visual novel that will have something for those who enjoy this world and genre, but it doesn’t offer enough compelling story or unique elements to stand out from others in its genre. 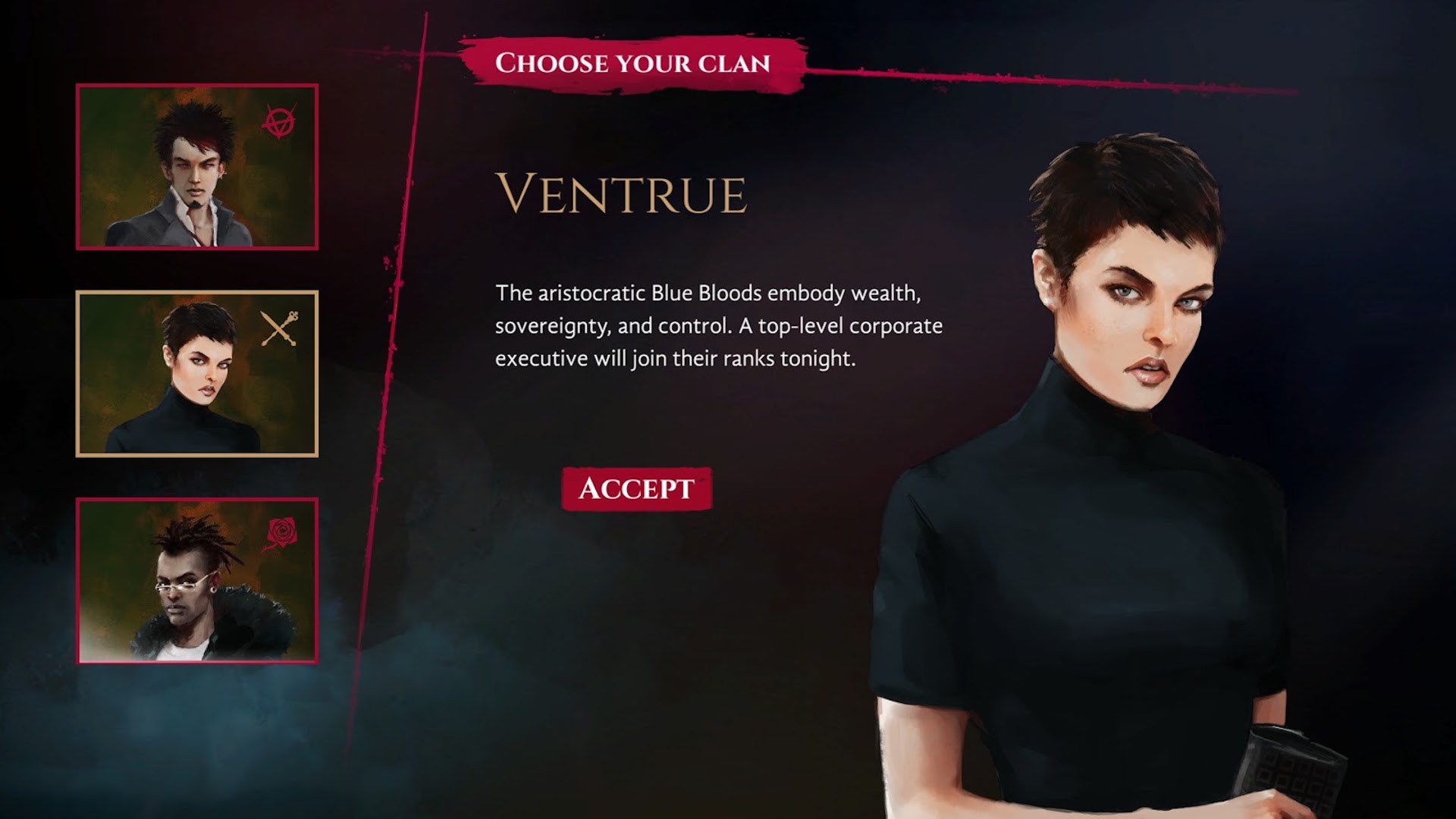 "With Vampire: The Masquerade – Coteries of New York, there’s a lot of that freedom to choose to act how you want and complete quests when you want. Unfortunately, there’s a lot of clutter that overshadows the few interesting characters and intriguing narrative arcs it presents."

Developer Draw Distance immediately introduces you to the world of New York, where there’s tension between the Camarilla and Anarch groups of vampires. You are immediately transformed into a vampire and forced to join the Camarilla sect of vampires in New York City. Soon after, you’re taken under the wing of Sophie Langley, a higher-up in the sect who, in return for saving you from the Final Death, wants you to create a coterie of other vampires around New York to help her. This motivation is the game’s central drive, and Sophie is your overarching guide for the majority of the story.

You can choose to play as one of three separate people, each of whom joins a different clan of vampires. While the main story stays generally the same, there are differences in how different events can play out based on which person you choose. Each has different abilities that unlock particular dialogue options in certain spots, each of which allows for a different action that gives a leg up in easing tensions and surpassing obstacles. It features a map and quest hub to let you choose how you spend your nights. Each mission takes half of a night, and, aside from some predetermined missions that take place at certain times, you can do quests in almost any order you choose. In doing this, you will likely not be able to finish all of the quests over the course of nearly twenty nights before the game’s conclusion, so you’re encouraged to choose which missions to take on wisely.

You also have to keep your eye on your hunger, which requires you to periodically feed on humans so you are not overtaken by the oft-mentioned Beast that lives within vampires. Before this happens, though, hunger causes you to miss out on the vampire ability dialogue choices. While this is an interesting idea in theory, the opportunities to feed are abundant, including the ones that have little opportunity cost and have low risk of being caught. I found myself rarely ever nervous about where my next meal of blood would come from. 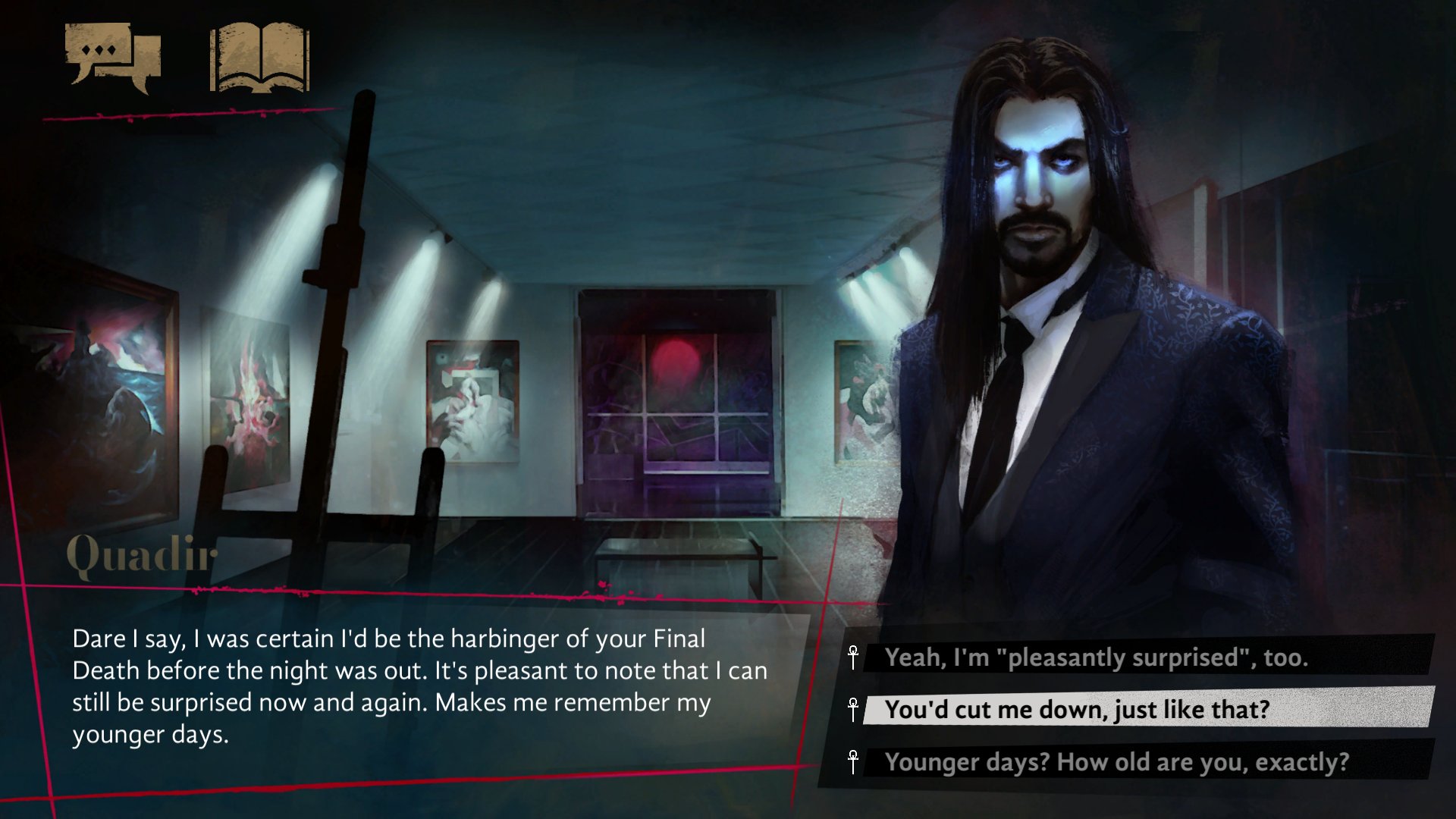 "Each mission takes half of a night, and, aside from some predetermined missions that take place at certain times, you can do quests in almost any order you choose."

As you’re working through the missions, you will find dialogue trees and branching paths that can occur based on your choices. Recruiting characters into your coterie consists of completing quests akin to Mass Effect’s loyalty missions, and you can fail to successfully recruit a character. There are many ways the story can diverge, and there are multiple endings based on your recruitment success and various choices throughout. Unfortunately, in some dialogue trees, there are effectively right or wrong answers, and there are points where these answers are not made clear and their consequences not explained. One scene had me monitoring a chat room to ban, kick, or ignore certain users, and on multiple occasions I was incorrect in my discipline choice based on information that was provided after my choice was made. Other choices were entirely inconsequential altogether, despite their seeming importance. It makes for an oddly unbalanced choice mechanic, where some choices are clear and have distinct outcomes, while others are almost a guessing game as to which choice is correct.

While you get to meet and interact with a lot of different people and vampires, though, it’s very hit or miss as to whether their characters are intriguing or their quests engaging. Many of the characters feel one-dimensional because their motivations are introduced immediately and never evolve. While none of these side characters spend a lot of time with you individually, they cumulatively take a significant chunk of your time. Many of them even seem to speak in the same way, making differentiating characters much more difficult. Some of their quests focus more on explaining the backstory of the world than on advancing any plot points, which is what many of these characters’ purposes seem to be, but this makes for some incredibly verbose and painfully tedious moments.

There are only a handful of characters who make a real impact, and your ability to choose your sequence of quests can hurt the pacing. The characters that have the most depth are the ones who pop up throughout the story and drive you forward, sometimes literally. Sophie and the Sherriff, Qadir, are two notably deep characters that you get to know well and develop relationships with. Some of the companions, like Tamika and Agathon, have depth and complexity as well, as their relationships, both with you and with their close ones, are explored and tested. Unfortunately, these characters only show up a handful of times, and the rest of the story is filled with a lot of the other characters and events that can feel both inconsequential and filler. Luckily, the visuals that accompany each location and character are beautifully detailed to complement the novel’s text, giving you a great look at the dark world and environments you’re experiencing. 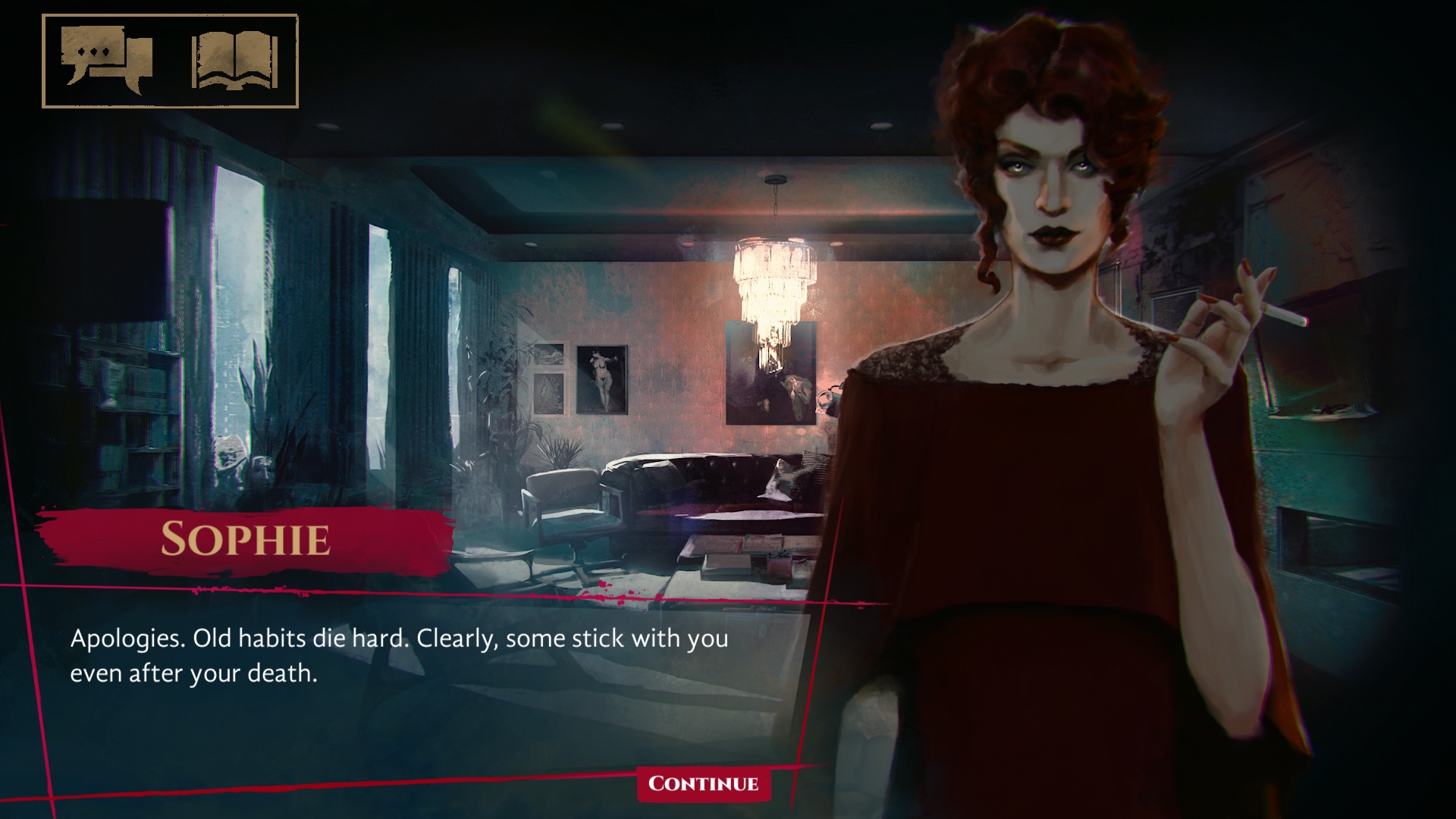 "Unfortunately, the most interesting characters only show up a handful of times, and the rest of the story is filled with a lot of the other characters and events that can feel both inconsequential and filler."

It comes together, however, to create a package that feels like it overstays its six-or-so hour welcome and makes a muted impact. While some of the individual characters are interesting to explore, the overarching narrative can get lost in the shuffle of the individual quests you have to complete and the side characters you encounter, especially when what you’re doing feels like an irrelevant aside to your motives that add little to the world or narrative. There’s not much in the way of a central theme that the game is trying to convey that relates it back to the player. There are certainly moments where morality, loyalty, and the afterlife are explored, but it never felt like there was anything profound that brings it all together or any ultimate statement that should be taken away.

There are moments in Coteries of New York where I was surprised, excited, or moved, but it took some filtering through uninteresting characters and uninspired quests. Fans of the Vampire: The Masquerade saga will find this a welcome addition to the world and fans of visual novels will find aspects of this story that are worthwhile, but it’s hard to recommend to anyone outside of these circles. It’s not doing anything groundbreaking in its genre, and there are many other experiences that outdo it without all of the clutter. I like some of what Coteries of New York offers, but I feel like I could’ve spent my undead life in a better way.

Plenty of one-dimensional characters; Most quests are hit-or-miss; Easy-to-manage hunger.

Final Verdict:
FAIR
Vampire: The Masquerade – Coteries of New York is a visual novel that has bright spots and some intriguing moments but is brought down by a lot of filler material that adds little to the overall package.
A copy of this game was provided by Developer/Publisher/Distributor/PR Agency for review purposes. Click here to know more about our Reviews Policy.