Vane Review – For the Birds

Posted By Will Borger | On 21st, Jan. 2019 Under Article, Reviews | Follow This Author @will_borger

A young child runs through a storm. Around him, the world flies apart. Sections of metal are torn off by the wind, and the lightning blackens those that remain. The child runs toward a house, only to see it evaporate before their eyes. They keep running. They come to an enormous tower and are about to enter when a figure, clad in black and wearing a golden mask in the shape of a bird’s head, blows him backwards from the door with some sort of sonic attack. The door closes. The child barely manages to stand before the black clouds of the storm sweep them away.

A raven sits on a leafless tree in the desert, near a pool of water. With the push of a button, it rises into the sky. You are surrounded by the ruins of a lost civilization. There is no direction given. You just fly. That’s how Vane, the first game from Friend and Foe Games, begins. Members of the studio have worked on a number of projects, mostly notable The Last Guardian, and it’s easy to see Team Ico’s influence all over this game, from the art to the camera. Sometimes, that is a good thing. Other times… well, I mentioned the camera, right? 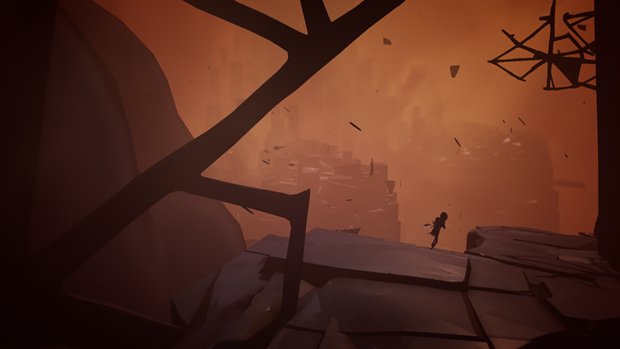 "Most of the game’s puzzles, and progression, are built around making the most of these two forms: being a bird allows you to access otherwise inaccessible places, and call other birds to alter the environment, but being a child allows you to climb, and interact with objects."

Vane is an odd game. The first section, in which you play as the child, is incredibly directed. The game refuses to let you fail. You can’t fall into the pits that the storm creates. There are invisible walls that keep you from going the wrong way. The goal is obvious: escape the storm. The section that follows is much less so. As a raven, there isn’t any direction at all. It’s possible to fly around for a long time without understanding what the game wants you to do, and as a raven, you can’t do much. You can land on certain objects, and call other birds. That’s it.

After a while, you’ll figure it out. Those shiny things you occasionally see as you fly? You want to land on those. Call the other birds whenever you can. If you’ve landed on something and call other birds, they will come over and sit on whatever you’ve landed on. Obviously, in a desert full of ruins, that much weight can cause problems. There’s a lot to like about being a bird: the map is utterly enormous, and you can go pretty much everywhere. But the disparity is obvious; there’s no direction. There’s seemingly no connection between the two sections. And the camera, which performs admirably while you’re a child, is utterly inconsistent as a bird. Sometimes it’s fine, hovering behind you at an appropriate angle. But when you go too fast, the camera perches on your bird’s back, causing your raven to fill up most of the corner of the screen.  This doesn’t seem like it would be an issue, but this is a bird, not a gun, and the bird’s wings proceed to take up a good portion of what remains of your screen, making the whole experience rather claustrophobic.

Things don’t really come together until you discover the piles of gold. Get close, and you’re transformed into a child again, dropped from the sky. Most of the game’s puzzles, and progression, are built around making the most of these two forms: being a bird allows you to access otherwise inaccessible places, and call other birds to alter the environment, but being a child allows you to climb, and interact with objects, whether it be something as simple as pushing a wooden block or breaking open a cage to free a bird to use in your raven form. To transform back, all you have to do is find a high place and jump off. 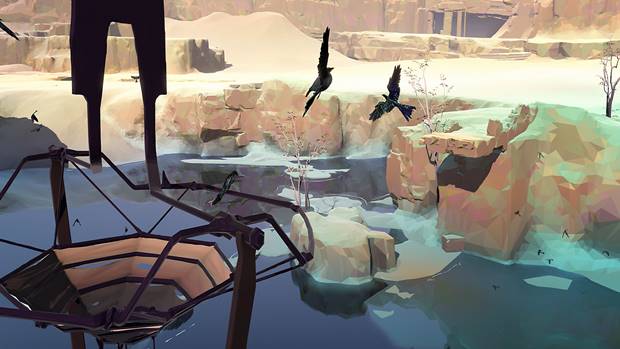 "The game’s appeal largely rests on its presentation. The art design is gorgeous, the environments alternating between invoking wonder and dread, and the game’s camera makes the most of it, often mirroring the best work from studios like Team Ico."

Once you acquire the ability to transform your character, the game’s scope shrinks significantly. Sections become narrower and more focused, and the child form takes ever more precedence. By the end, the wide-open world you explored is a distant memory, and something that seems far removed from what the game becomes. This is by design, given the nature of the game’s narrative, which I am loath to spoil. Suffice it to say, things don’t go the way you think. There are two endings, but I think only one of them makes sense when the entire game is taken into account. All told, it’s a short journey; it took me about four or five hours to see everything the game had to offer, including both of the endings and every available trophy.

The game’s appeal largely rests on its presentation. The art design is gorgeous, the environments alternating between invoking wonder and dread, and the game’s camera makes the most of it, often mirroring the best work from studios like Team Ico. It’s the little details: the way gold flecks off the child after you transform, the way the light hits an object of significance as you round a corner, or the way the storm rolls over the environment in front of it. The game’s music is equally absorbing, featuring both more traditional instrumentals and, surprisingly, electronica that works well despite the initial shock that accompanies its use.

It’s the presentation, the world, and the story itself that you come to Vane for more than any of the gameplay. In many ways, the game feels like it wants to be Journey: actions are simple, you have a button to rally other things to you, and you spend much of your time wandering through engrossing places. Unfortunately, Vane lacks Journey’s highs. Spending time as a raven can be fun, provided the camera doesn’t get in the way, but there’s nothing as good as surfing the sand through abandoned ruins or flying on a trail of scarves. 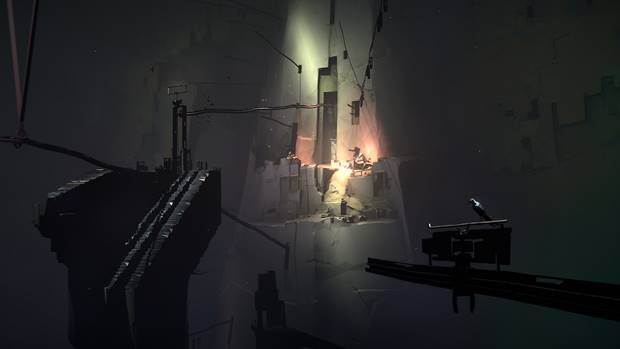 "But for all its flaws, I’m still thinking about the journey, and the ending, and trying to parse out what it means. There’s something in that."

Bird form aside, it’s a very standard indie platformer that often invites you to look instead of touch, and whose gameplay could politely be described as “limited,” especially as a child. The game also lacks a sense of focus that defines the best indie games. The switch between the first and second sections is jarring, and the connection between bird and child never quite comes together the way it feels it should.

That’s not to say that the game doesn’t have value – it does – but these limitations, combined with a few bugs (I once had to restart the game to properly interact with an object, and unlocking trophies in a certain order in another can break the level) limit what Vane could be. But for all its flaws, I’m still thinking about the journey, and the ending, and trying to parse out what it means. There’s something in that, even if it is fleeting, like it’s about to transform into a bird, and fly away.

Typical indie platformer gameplay. The bird and child sections don't come together as well as they could. Some bugs.

Vane is an interesting, beautiful, and provocative indie platformer brought down by design inconsistencies and bugs, but fans of the genre will find something to like here.

A copy of this game was provided by developer/publisher for review purposes. Click here to know more about our Reviews Policy.
Tagged With: Friend and Foe Games AB, ps4, sony