Takes the shooter from a different flank and turns things up, but disappointingly never gets all the way to 11.

The shmup is one of gamings oldest genres, and very set in its design at this point. Though it has found footing again in recent years on digital marketplaces, games like Space Invaders Infinity Gene or Galaga Legions DX mostly stay true to progenitors like Gradius. Velocity 2X steps outside that comfort zone, trying out the skin of a SHMUP while hiding a healthy amount of platforming underneath.

Velocity 2X opens slowly, introducing its plot and elements very slowly via flashbacks and brief dialog scenes before levels. We begin with Kal, a lone woman stranded in alien space and being brought back from the brink of death through technology after her experimental spacecraft  malfunctions while investigating a black hole. 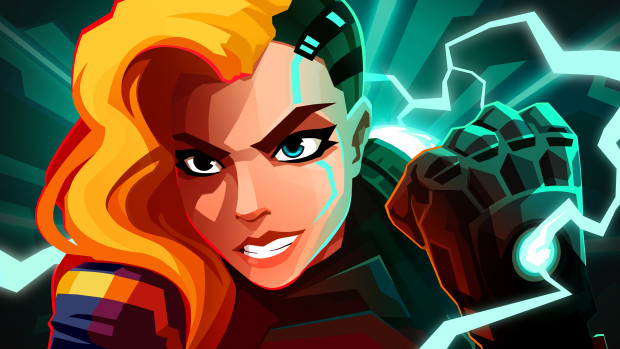 "Thankfully, the plot takes a back seat in Velocity 2X Ultra and ignoring it isn't detrimental to your enjoyment."

Kal is enhanced by the tech attempting to repair her, giving her amazing abilities that slowly unlock through stages, such as short range teleportation and releasing pulses of energy from her hand. She is helped along by a friendly alien, whose race has been subjugated for millennia by another race.

Her escape and attempts to get home create the core of the plot, though its frankly not very interesting to follow. Nothing outside of standard scifi occurs here at best, and reads like high school creative writing from a disinterested student at worst. The borderline bad story is framed by some rather basic art that could have used a lot more polish to come off as better than the average student learning to use Adobe Flash.

While the ugly art sticks around like an unwelcome house guest, thankfully, the plot takes a back seat in Velocity 2X Ultra and ignoring it isn’t detrimental to your enjoyment. Gameplay is split between on foot and in ship, each with more or less the same goals and you’ll almost always do both several times within the course of a stage. 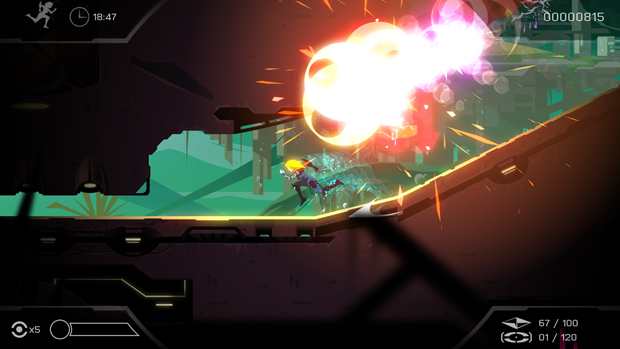 "Since everything is happening in real time as your teleporting instead of taking a page from something like The Swapper by slowing down, it does limit creative use in the occasional combat situation."

Shipboard segments involve a heavily SHMUP inspired trip through the confines of a space station, though to call it a shmup is difficult. Combat is sparse at best, and the most threatening thing you’ll come across is the random turrets dotted through later levels. The focus is on how fast you can navigate your ship around your surroundings while activating sequential switches and gathering items, rather than circumventing bullets. The twist on it comes in the teleportation mechanic, where you can dissipate and reappear anywhere on the screen with simple directional input.

It’s an awkward mechanic to get the hang of, though it does click and is very satisfying to master. Since everything is happening in real time as your teleporting instead of taking a page from something like The Swapper by slowing down, it does limit creative use in the occasional combat situation and demands breaking pace to position yourself as carefully as demanded. 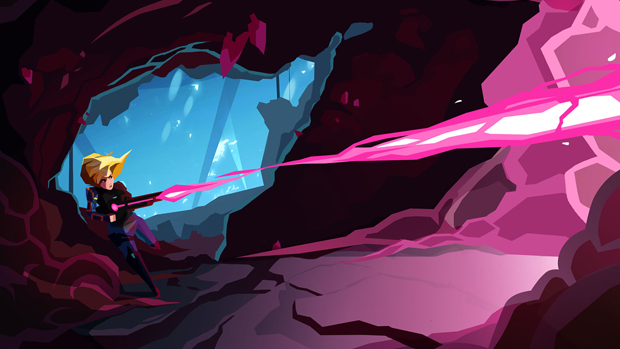 "Metroid is a comparison thrown around Velocity a lot, but as these sections are completely linear and there are no power ups, it isn’t very apt."

New to this particular update to the title. Levels will demand that you dock at least once in a stage to find a hidden switch within in order to progress. These on foot portions control slightly differently from the ship segments, demanding an obvious shift in style that isn’t completely unwelcome. It breaks up the action pleasantly and gets you thinking in a different mindset.

Goals remain largely the same within these corridors, asking you to manoeuvre around your environment using a short range “tele-dash” and your eight direction repulser hand blast. Combat becomes a lot more engaging in these sections about halfway through the game, though ends up almost as infrequent as space bound excursions.

Metroid is a comparison thrown around Velocity a lot, but as these sections are completely linear and there are no power ups, it isn’t very apt. Advancing through levels and reaching story segments is what gives Kal her new toys , but they either end up being inferior to your standard equipment at best, or completely stop the otherwise excellent pace at worst. 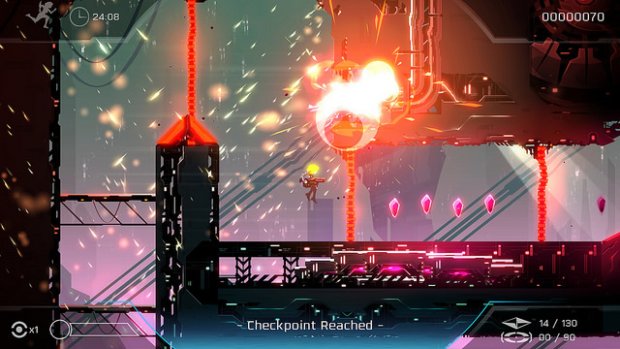 "The stop and aim nature they demand runs contradictory to the expectations of maintaining your forward momentum that the game has set up to that point."

About the middle point of the game, both sections get introduced to further forms of teleporting. The ship portion mainly uses it for backtracking at suggested or improvised locations, but the on foot segment is much more involved. The “Tele-pods” function in a fashion similar to a piece of Stealth Inc. DLC, or to be more universal, vaguely like Portals.

While interesting in concept and vastly more versatile than the shipboard equivalent, the stop and aim nature they demand runs contradictory to the expectations of maintaining your forward momentum that the game has set up to that point. Its another area where more thoughtful level design and a leaf from The Swapper might have resulted in a mechanic that didn’t seem to be counterintuitive to what the rest of the game is telling you.

Both divergent styles really only share a nitpick in the lack of feedback when hit by enemy fire, making it hard to keep track of health. Stages consist on a back and forth between the two styles, rapidly switching and never lasting long enough to drag on. It’s easy to kill minutes or lose hours to the sub five minute levels of Velocity. The game is cross buy and cross save compatible, and the mission design works in heavy favour of this, though it disappointingly works on a manual basis alone. If you don’t upload and download when you’re in range of a network, you’ll either be out of luck or replaying stages. 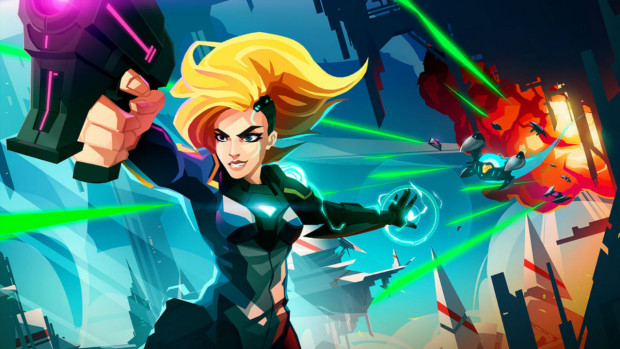 "It’s really a toss up between whatever is available to you at the moment that decides what you’ll want to play on."

The Vita version loses nothing in transition to the portable format outside of less reliable leaderboard access for obvious reasons. Presentation is identical in all facets, and the controls remain intuitive enough for the most demanding trench run. The unique hardware of the Vita allows the ship to teleport at a single tap of the finger, but trying to do this for all but hopping side to side is simply inefficient. It’s really a toss up between whatever is available to you at the moment that decides what you’ll want to play on

Velocity 2X Ultra’s main concern and probably greatest strength lays in its scoring system. Each mission gets graded at the end and you get marked on time, collectables and general score within each stage. Leaderboard between friends or the world are constantly updated and the short levels are conducive to repeated, burst play. It all comes together like a well crafted meal to create a very addictive scoreboard chase, and if that’s something you and your friends can get into Velocity will serve you very well. 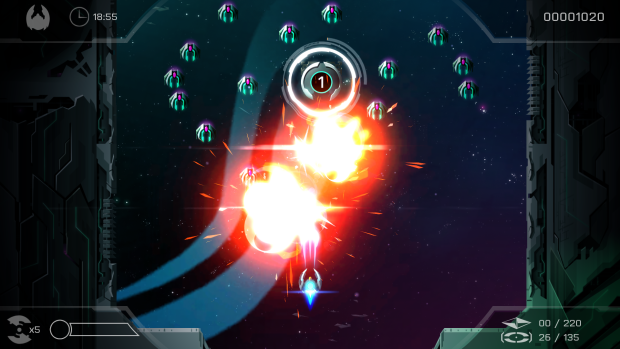 "Velocity 2X Ultra is a wild ride for a single player and addictive second-shaving for a group of leaderboard chasers."

Through deciding to approach the SHMUP genre at a radically different angle, Velocity does score attack in a very intriguing way. There are clear areas where the design or presentation could have taken cues from other contemporaries, but at the end of the day Velocity 2X Ultra is a wild ride for a single player and addictive second-shaving for a group of leaderboard chasers. While i would hope to see it grow into the potential I see here with future iterations, It’s hard not to recommend Velocity 2X Ultra.

Great leaderboard chaser that turns the SHMUP genre on it’s head. New on foot segments blend into the shipboard gameplay almost seamlessly and teleporting around while trying to keep up forward momentum is very engaging.

Story is bad enough that you’ll tune it out, and the art style isn’t very polished either. There is some wasted potential here when it comes to certain design elements that stick out and make the game seem like less than it is when you see what it could become.

Final Verdict:
GOOD
Find some friends to compete with, or just speed through it solo. Either way, Velocity is a ton of fun. It’s just that it’s easy to see where it could have been better, and that takes something away from what it does do exceptionally well.
A copy of this game was provided by Developer/Publisher/Distributor/PR Agency for review purposes. Click here to know more about our Reviews Policy.