JoyMasher is out with a new 16-bit side-scrolling action game, this time around channeling the fast-paced melee combat of games like Ninja Gaiden and Shinobi with Vengeful Guardian: Moonrider. How well does the studio behind Blazing Chrome pull off its latest outing?

At this point, developer JoyMasher has earned something of a reputation for making a particular type of game. We’ve seen the studio work on, and eventually perfect the style of gameplay that, at its heart, can be quite favorably compared to the classic Super Contra. This was most obvious with one of the studio’s earlier works – Blazing Chrome. JoyMasher is kicking off the year 2023 with its newest game, Vengeful Guardian: Moonrider, and when it comes down to it, it seems like the studio is more than happy to stay in its comfort zone. But that’s not necessarily a bad thing.

Much like Blazing Chrome, Vengeful Guardian: Moonrider is a love letter to classic side-scrolling action platformers. Much like its predecessors, Vengeful Guardian: Moonrider is channeling classics like Super Contra, Ninja Gaiden, Shinobi, and to some extent, even games like the Mega Man X series and Super Castlevania 4. Sure, that’s a long list of games to refer to for the sake of a review, but I’m essentially using these games to lay a foundation.

Vengeful Guardian: Moonrider is a side-scrolling action platformer with a heavy emphasis on getting better at the game through the strength of repetition. Rather than just borrowing gameplay and visuals from its 16-bit inspirations, Vengeful Guardian: Moonrider also borrows quite a bit when it comes to the general game loop, especially when you take into account its difficulty and the speed and precision it demands of the player.

Let me get this out of the way: Vengeful Guardian: Moonrider is an incredibly difficult game. The game’s own description on Steam goes as far as referring to its levels as “deadly”. And this is because at the very center of the entire gameplay loop is the fact that you’re going to have to repeat these “deadly” levels quite a few times. Thankfully, the general speed and gameplay prevents this repetition from getting annoying, and the relatively short 4-5-hour play time certainly helps make the whole experience quite fun and breezy. 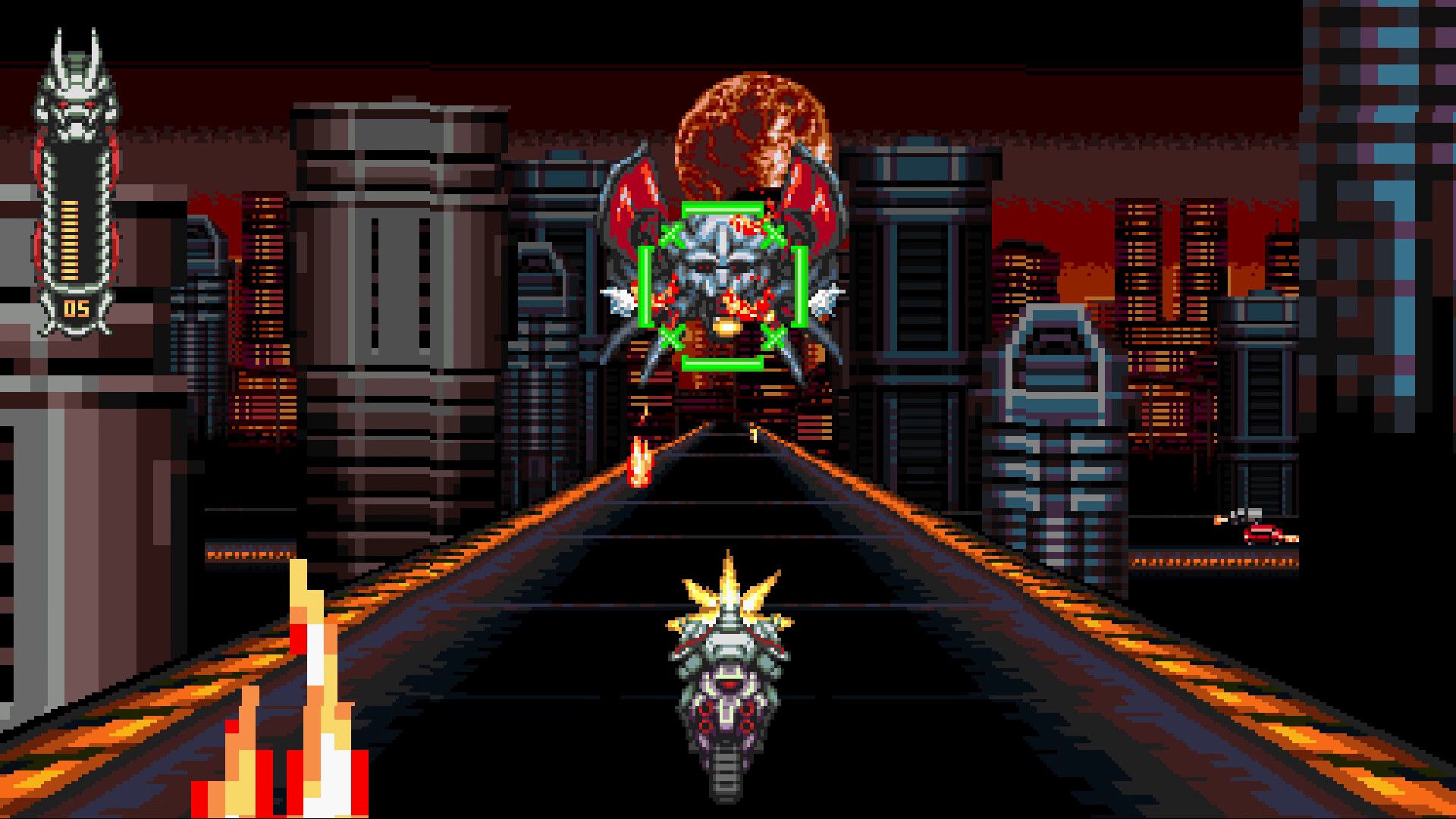 "Let me get this out of the way: Vengeful Guardian: Moonrider is an incredibly difficult game."

Difficulty and a short run time aren’t the only ways the game manages to pull off its replayability, however. As you fight your way through the game’s various levels, you’ll inevitably find modifier chips that help you customize the fighting style and move set for your character, the titular Moonrider.

One of the most striking things about Vengeful Guardian: Moonrider is its look. Sure, on the surface it might look like yet another retro-styled 2D platformer, but interestingly enough, the game taps into more than just the look of classic games. Its use of more modern technology largely stems from its desire to maintain the look and feel of its 16-bit predecessors.

This goes beyond just things like pixel art, too. Seeing too many projectiles on the screen from various enemies might cause some sprites to flicker, and it even has some fancy “3D” sequences that feel like they were ripped right out of a Contra level. Rather than just going for surface-level aesthetics, Vengeful Guardian: Moonrider goes all the way, and surprisingly enough, manages to execute on its vision without it getting in the way of the core gameplay.

"Rather than just going for surface-level aesthetics, Vengeful Guardian: Moonrider goes all the way"

This attention to detail also carries forward into the game’s chosen style of storytelling. While most of it largely makes use of sprites talking to each other through text boxes, there are often full-fledged cutscenes that also look right at home on the classic consoles it’s trying to emulate.

When it comes to the core gameplay, Moonrider is equipped with a few tools right from the outset. Alongside the typical jumping and attacking, you also have access to a couple of specialized moves to begin with: a dive kick and a heavy beam attack. While these aren’t exactly insane attacks that would change how you go about taking on a challenge, the addition of a dive kick is an incredible way to showcase right from the beginning just how much expression of skill is possible in the game.

While most of us will just play through the opening levels by largely relying on the basic attack, more skilled players will undoubtedly find their way through Vengeful Guardian: Moonrider’s levels much faster by making use of the dive kick. The trick is that, along with dealing quite a bit of damage if you can land it, it also acts as a great way to maintain forward momentum and gain higher jump height. Sure, it’s simple, but its simplicity hides quite a clever level of depth where the difference between beginners and skilled players becomes obvious right from the outset. 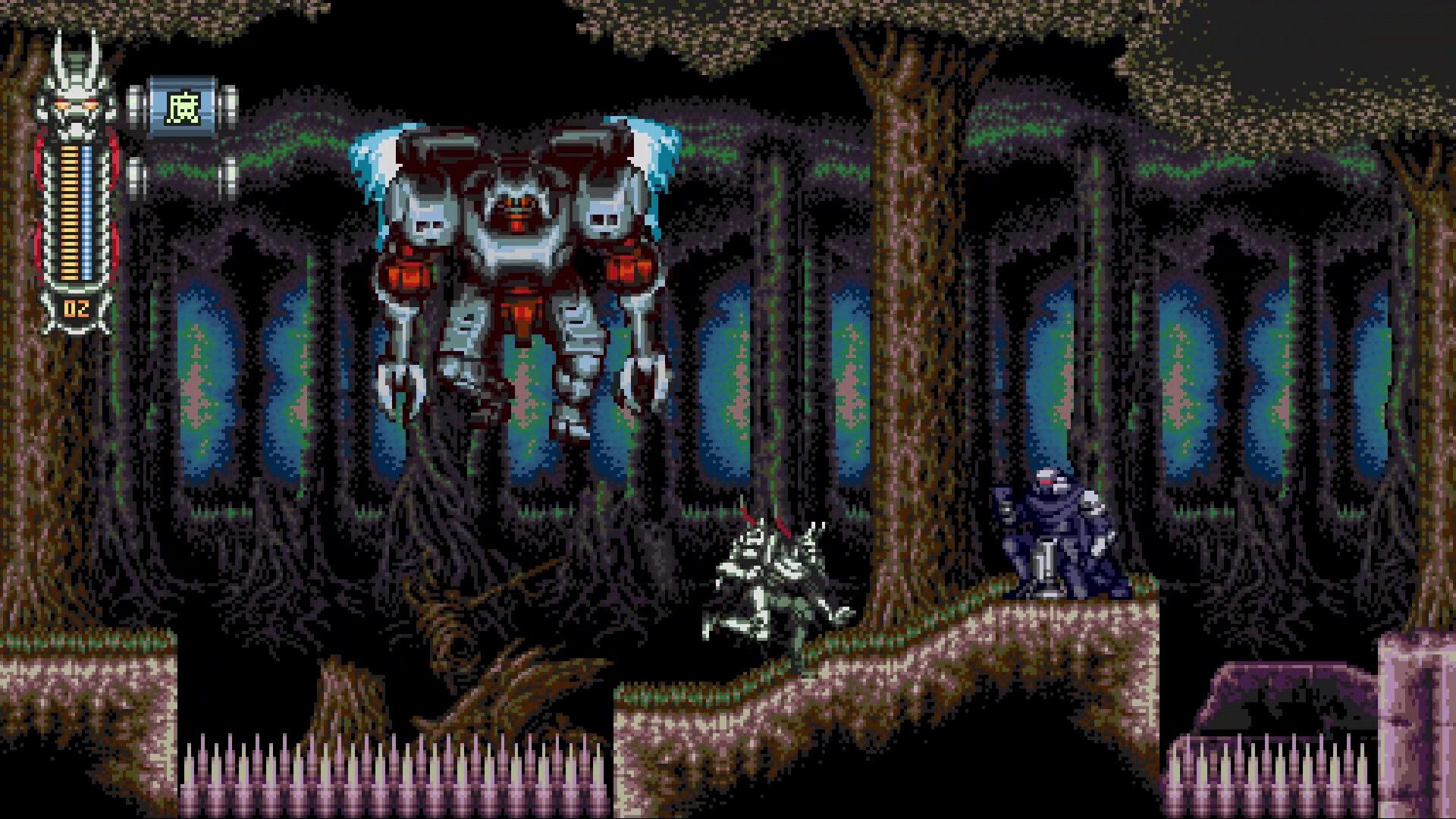 "Its simplicity hides quite a clever level of depth where the difference between beginners and skilled players becomes obvious right from the outset."

While the levels themselves are quite fun, even throwing in a surprising variety of things like simple puzzle bosses and even third-person action-packed bike chases to help break up the monotony of going to the right and killing things. Each level is capped off with boss fights that quite often aren’t just a visual treat with their cool designs, but also mechanical treats as you figure out attack patterns and eventually learn to take down a boss without getting hit even once.

Like I said earlier, the levels are incredibly short, making repeated playthroughs – especially of earlier levels once you’ve unlocked a few upgrades – quite fun. Even on my very first attempt, the first level took me around 8 minutes to finish, and that’s counting around 5 attempts at the boss where I had to slowly take my time to learn how the boss attacks before I could get serious about taking it on. Also, as far as first bosses are concerned, Vengeful Guardian: Moonrider definitely makes a great impression.

Alongside the visuals, the gameplay is also enhanced to quite a degree thanks to the game’s music and audio design. While attacks sound like you’d expect from a 16-bit action game, the soundtrack is low-key one of the best things about Vengeful Guardian: Moonrider. The game’s music has a heavy emphasis on meaty bass drums with level-appropriate synths. All in all, the music helps propel you forward just about as much as the sprint button does by keeping the tempo high and getting you in the flow. 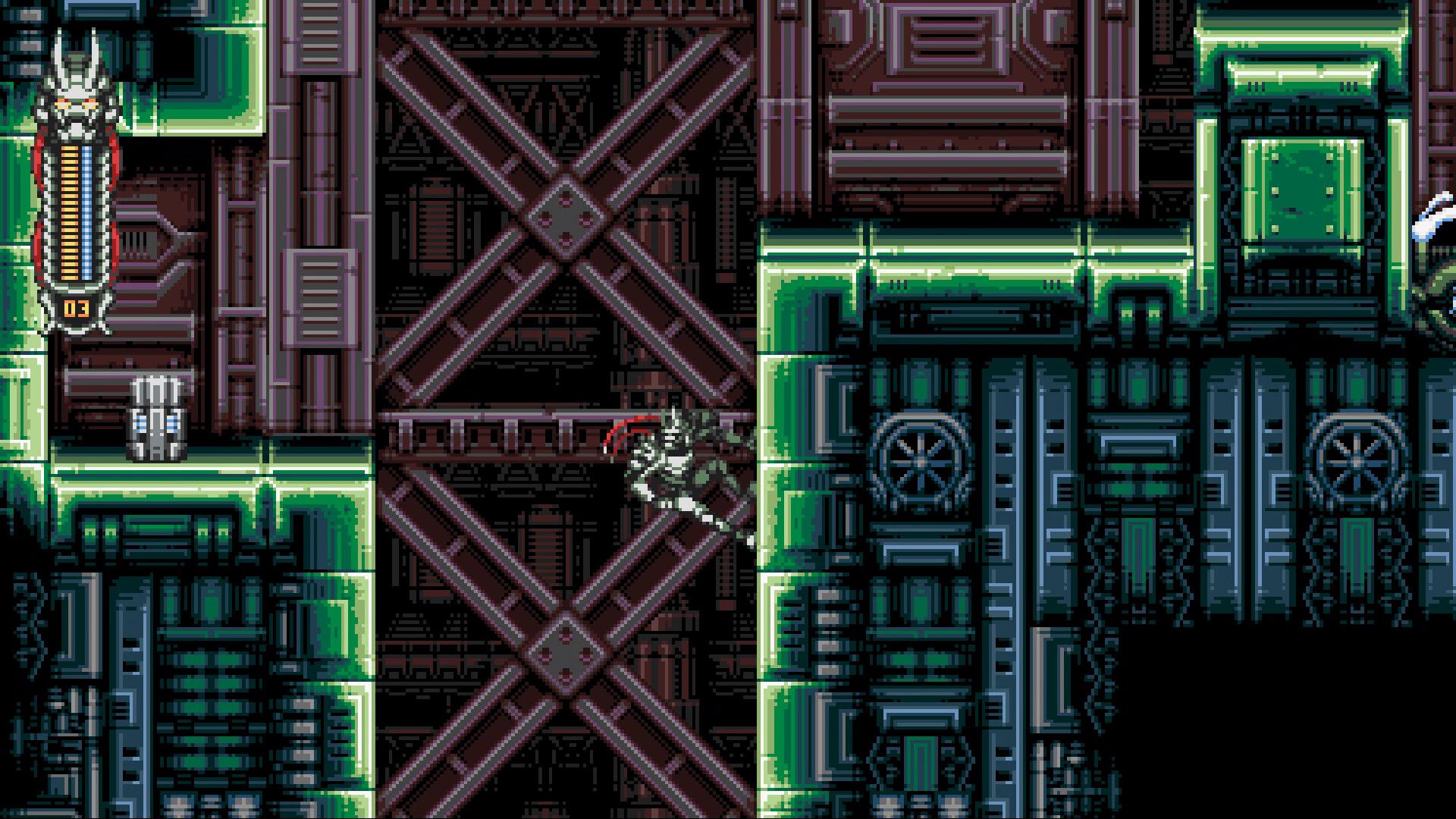 "The game’s music has a heavy emphasis on meaty bass drums with level-appropriate synths."

When we get right down to it, Vengeful Guardian: Moonrider isn’t going to be winning any awards for originality with its concept or influences, but it definitely deserves a fair bit of recognition thanks to its core gameplay, excellent visuals, and a great soundtrack. While some may already be tired of classic side-scrollers, I’d argue that there’s still plenty of room for those kinds of games if they can manage to reach the no-holds-barred non-stop action like Vengeful Guardian: Moonrider manages.

Just about every aspect of Vengeful Guardian: Moonrider feels incredibly fine-tuned to offer a very specific type of action, and as this game proves, JoyMasher seems to be on the cusp of having perfected this type of game. Sure, we’ll get many action games inspired by classics, but there’s a level of expertise on display in Vengeful Guardian: Moonrider that makes me quite excited to see what’s next for JoyMasher.

Not the most original game out there.

Final Verdict:
GREAT
Vengeful Guardian: Moonrider is far from the most original game out there. It wears its 16-bit influences on its sleeves, and developer JoyMasher certainly isn’t a stranger to this specific kind of game. However, there is a level of expertise on display in Vengeful Guardian: Moonrider that ends up making the game a pure joy to play, thanks in no small part to its snappy controls, excellent visuals, and a stunning soundtrack.
A copy of this game was provided by Developer/Publisher/Distributor/PR Agency for review purposes. Click here to know more about our Reviews Policy.