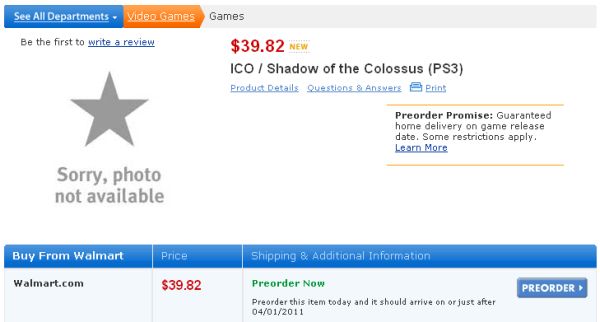 Walmart rocks. Those guys just ousted MAG 2 on their website. And now, they have also listed a Team Ico Collection for the PS3, which include the very successful PS2 titles, Ico and Shadow of the Colossus. It was inevitable, but still, it comes as a surprise. And guess what? Walmart is even taking pre-orders for it. Strange, it’s not even officially announced yet. The best thing? It’s just $40.

The game will be released on 4/1/2011 according to the listing. I just hope the guys at Walmart don’t know how to joke. This better be real.

Maybe Sony might officially announce this game at TGS this year. They have already said they are “very, very aware” of the demand for a collection. Let’s keep our fingers crossed.