Crytek’s been stuck in a bit of a rut lately. While their early efforts, such as Far Cry and Crysis, earned a fairly large amount of acclaim and did well commercially, nothing they’ve done recently has had the same spark that made those titles special, and the developer has struggled to stay true to its roots, while at the same time chasing the success promised by the console market and attempting to turn the CryEngine into a licensed product capable of competing with Epic Game’s now ubiquitous Unreal engine.

But how to do it, and with what game? Of course, Ubisoft owns Far Cry, which is now more prosperous than ever thanks to last year’s excellent Far Cry 3, which left Crytek with Crysis. For the last few years, the German studio has tried to remain true to the PC-centric design of the original game, and appeal to console audiences at the same time, but despite adding multiplayer, porting the original game to consoles, and designing the sequels with controllers in mind, the series never really took off on consoles, and the changes irritated fans of the original PC release, who believed Crytek was dumbing the franchise down in order to appeal to the console audience. 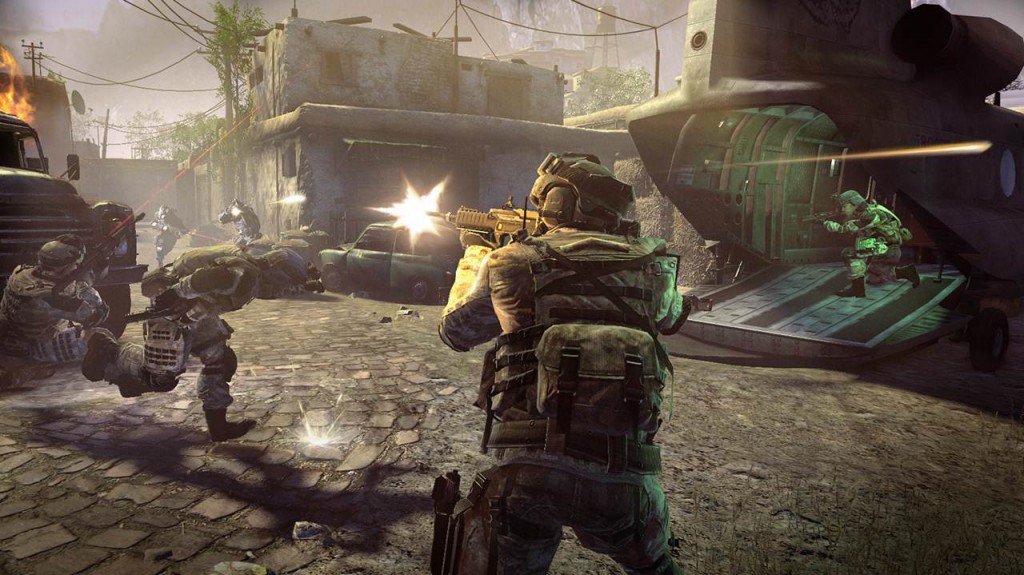 "The first thing you’ll notice about Warface is that it looks really good. That’s not much of a surprise considering that this is Crytek, but it is still pretty amazing that the game looks and runs as good as it does in a browser."

As a result, the series has become more and more irrelevant as time has passed. Crytek has blamed the series’ failure on many things, most notably piracy, but whatever the reason, the facts could not be ignored: Crysis just wasn’t selling, which finally prompted the developer to announce that it would begin to focus more of its attention on the emerging free-to-play market.

The result is the unfortunately titled and extremely direct Warface, a Free to Play military shooter. Unlike most of its ilk, Warface is a browser game that runs through Gface, Crytek’s social network/game service. You’ll have to use Gface to play Warface, and while the former is rather awkward in terms of design, it gets the job done. Once you’re set up in Gface, you can log into Warface and begin playing, though it should be noted that Warface does take a while to load, probably because the game has the unenviable task of making the CryEngine work in a browser. Once everything is loaded up, you’ll create a character (mine looked an awful lot like Jake Gyllenhaal) and choose an online handle. Once that’s done, you can jump right into the action.

The first thing you’ll notice about Warface is that it looks really good. That’s not much of a surprise considering that this is Crytek, but it is still pretty amazing that the game looks and runs as good as it does in a browser. The game’s environments are sharp and clear and feature Crytek’s trademark attention to detail, while the character models and weapons are well-realized and animated. 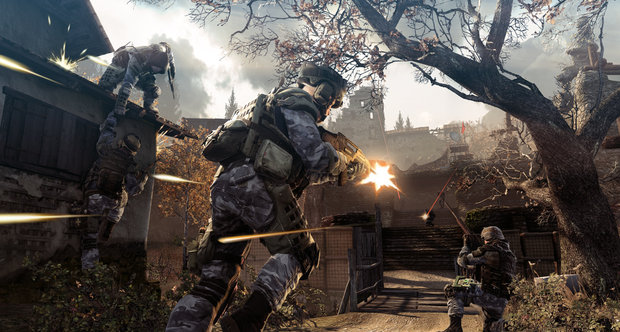 "The game is set in the future, which allows Crytek to do some interesting things with the armor design, and you will occasionally find yourself fighting against mechs and soldiers in power armor, but by and large, this is all stuff we’ve seen before."

Unfortunately, the game itself is extremely generic. All of the standard trappings of the modern FPS are here: there’s a co-op mode that supports up to five players, and a number of competitive modes, too, which feature genre staples such as free for all and team deathmatch, as well as other modes that will task you with planting bombs and capturing territories. If you’re looking for a story, you won’t find much of one.

Unfortunately, I always loaded into co-op matches after the briefing had started, so I never got the whole picture, but the general gist is that you’re a member of Warface who is tasked with bringing down Blackwood, a special ops group that’s turned to terrorism. It’s pretty generic stuff, but it kills the time until your helicopter touches down, after which any and all references to deadly weapons and threats to world peace mostly turn into “shoot everything that moves.” The game is set in the future, which allows Crytek to do some interesting things with the armor design, and you will occasionally find yourself fighting against mechs and soldiers in power armor, but by and large, this is all stuff we’ve seen before.

Fortunately, Warface plays well. The guns sound powerful and feel satisfying to shoot, and everything operates in a way that simply feels right, making it easy to jump in and play. In addition to the standard gameplay trappings of the military shooter, your Warfacer can also slide along the ground, provided that he has a running start, which is particularly useful when it comes to rounding tight corners, as it allows you to take out enemies before they react. In addition, you also have the ability to boost you allies up to otherwise unreachable ledges, after which you’ll be pulled up as well. It’s an interesting dynamic that adds quite a bit of verticality to the game’s maps, and can be a great help in co-op missions and competitive play alike. 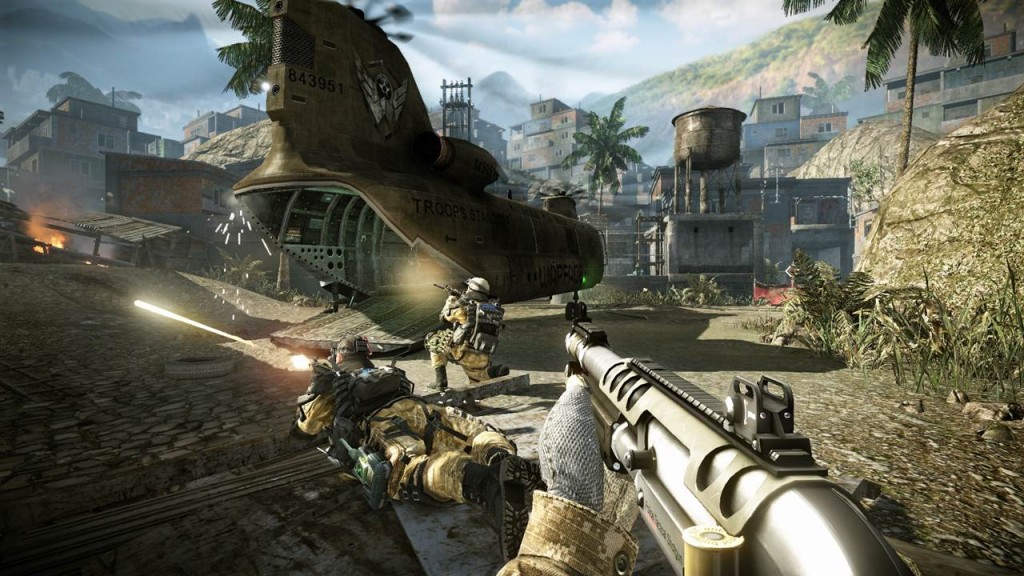 " The AI on display here isn’t outstanding, but the enemy’s sheer numbers and the verticality of the maps lead to some intense encounters that will had you facing off against foes in front of, behind, and above you. "

Indeed, teamwork is the name of the game in Warface, and Crytek has balanced the game’s classes – Assault, Sniper, Engineer, and Medic – around that fact. Each class comes with a primary weapon – an assault rifle, sniper rifle, shotgun, and SMG respectively – as well as a pistol and a knife, but the real difference comes from their unique abilities. For example, the assault class can drop more ammo for himself and his allies, the medic can heal the team and revive downed teammates, and the engineer can repair everyone’s armor and plant explosives. Every class has a role to play, and you’ll want one of each when you’re taking on the game’s co-op missions.

As mentioned earlier, the missions themselves are pretty standard. You’ll be dropped in an area by a helicopter, and tasked with eliminating a horde of computer controlled enemies. The AI on display here isn’t outstanding, but the enemy’s sheer numbers and the verticality of the maps lead to some intense encounters that will had you facing off against foes in front of, behind, and above you. Teamwork is crucial, especially when the game starts throwing its tougher enemies against you.

If a player dies and isn’t revived by a medic, he’ll become a spectator until the remainder of the team makes it to the next checkpoint and everyone is revived and ammo is restored. Checkpoints are spaced well, making each level tough but fair, and you’ll have to be on your toes and work with your team the whole way through if you want to come out intact. Thankfully, Warface is smart enough to go out of its way to encourage teamwork, offering bonus experience and in-game cash to teams that have one another’s back. 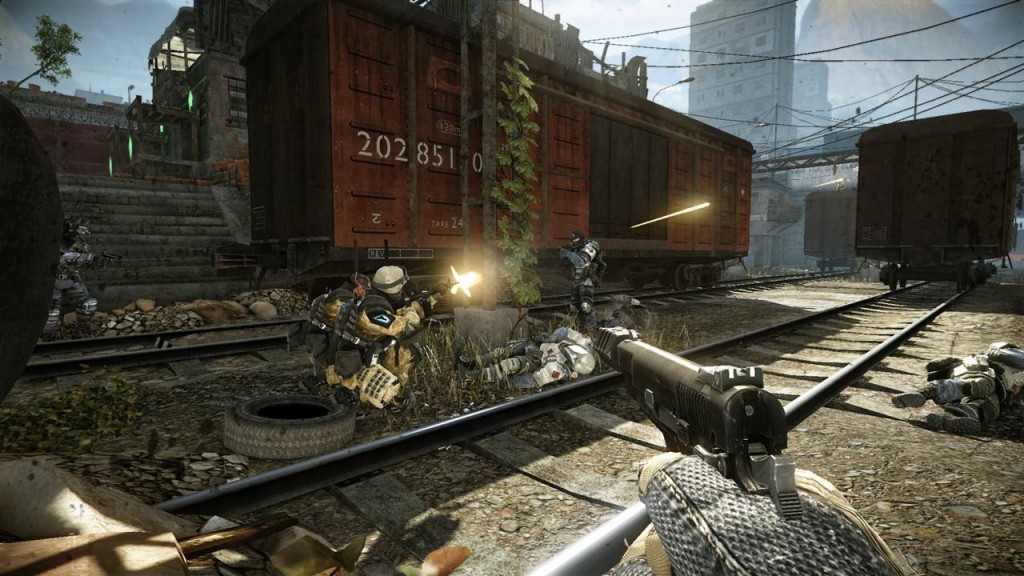 "There’s nothing that makes Warface stand out from the crowd. And so Crytek faces the same problem it’s had since 2007: the lack of an essential, must-play title in an ever-expanding genre that seems to have passed them by."

Unfortunately, the emphasis on teamwork doesn’t carry over the game’s multiplayer. There’s no respawn times, which means that it’s often faster to respawn and run back to where you were than wait for a medic to revive you, and you’ll often die before you need to worry about replenishing your ammo or have time to heal up or repair your armor. As a result, you’re multiplayer class of choice will largely depend on what weapons you prefer and how you like to play, as well as what you have available, as engineer and medic are not immediately unlocked from the start.

Of course, Warface is a free to play title, which means that there are lots of things to unlock and multiple ways to go about unlocking them. There are three types of in-game currency: crowns, cash, and kredits. Crowns are earned from co-op missions, cash is earned from just about everything, and credits are the real money option. Some items are only available via one of these, while some can be purchased multiple ways.

Unfortunately, most purchases are really only rentals, meaning that you’ll only have access to the weapons or armor you buy for a few real world days, while others will lose durability after you use them. While some items can be unlocked permanently, most items fall into one of these two camps, meaning you’ll have to keep paying if you want to keep using them. This takes away from any feeling of accomplishment you get when you “purchase” an item, especially since the in-game currencies, especially crowns, are awarded at a glacial pace.

Still, if that were the only problem that Warface faced, it might be enough. But it isn’t. It’s a perfectly competent shooter, but that isn’t enough anymore. The genre is too crowded, and there are too many superior games on the market, even in the free-to-play space, such as Team Fortress 2, Tribes: Ascend, and Blacklight: Retribution, all of which have better free-to-play models and unique identities. There’s nothing that makes Warface stand out from the crowd. And so Crytek faces the same problem it’s had since 2007: the lack of an essential, must-play title in an ever-expanding genre that seems to have passed them by.

“Been there, done that” feeling permeates the game. Initial start-up takes a long time. You have to go throw Gface and a web browser to play. You don’t really own most of the things you buy. Classes don’t really matter in competitive multiplayer.

Final Verdict:
MEDIOCRE
Warface is a pretty, competent shooter with a poor free-to-play model than doesn’t do anything to stand out from the crowd, and in an age with an overabundance shooters and a number of excellent free-to-play titles, that simply isn’t good enough.
A copy of this game was provided by Developer/Publisher/Distributor/PR Agency for review purposes. Click here to know more about our Reviews Policy.