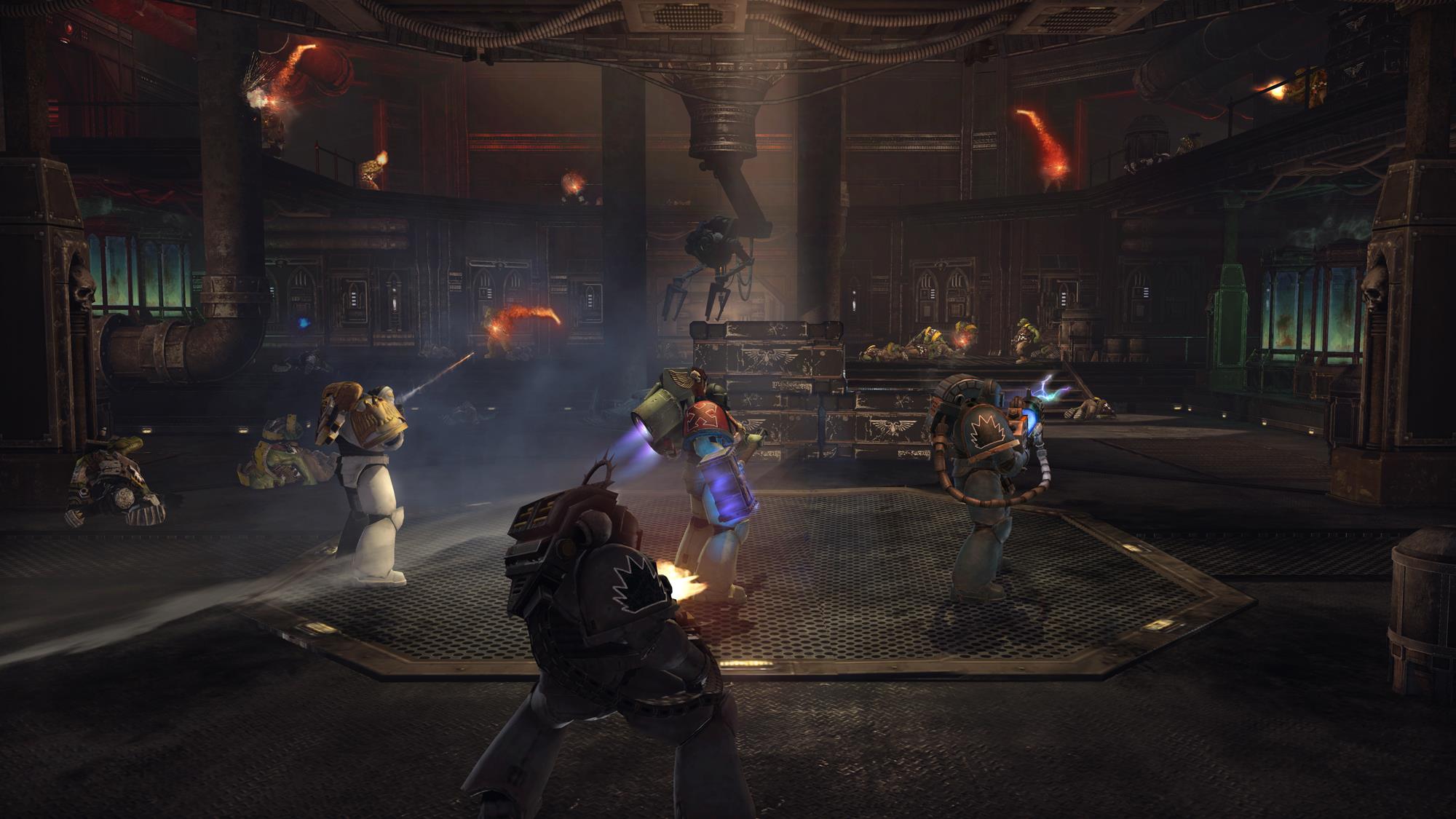 You know what’s fun?  Co-operative play, and a free download has just been announced for Warhammer 40,000: Space Marine for a co-op mode in early October called ‘Exterminatus’.  You will be able to pick you class and go up against tons of enemies that will be ranked on leaderboards and also give experience to level up just like multiplayer.  The best part is that it is FREE though.  Warhammer 40k: Space Marine will be out September 6th for the Xbox 360, Playstation 3 and PC.  Full Press Release below.

Space Marine’s Exterminatus mode pits an elite squad of four Space Marines against hordes of alien enemies in a score based fight to the death. Players can choose the Tactical Marine, Devastator or Assault Marine as well as utilizing any weapons and perks available to those classes.

Experience earned while playing this mode counts towards the game’s multiplayer ranks, allowing players to earn progression in both Co-Op and multiplayer.

When wave after wave of savage ORKS descend upon the Forge World GRAIA, it is up to humanity’s greatest warriors to win the planet back.

They are SPACE MARINES, genetically modified, encased in hallowed armor, the equivalent of one hundred lesser men. They live only to defend the Imperium, and to slay its enemies in a war that never ends.

CAPTAIN TITUS, along with his comrades LEANDROS and SIDONUS, lead a detachment of these Space Marines onto the Forge World. There, they quickly discover that the fight against the Orks is not all that requires their attention. An Imperial Inquisitor named DROGAN needs help securing an experimental POWER SOURCE, before the Orks do so themselves.

THQ Inc. (NASDAQ: THQI) is a leading worldwide developer and publisher of interactive entertainment software. The company develops its products for all popular game systems, personal computers, wireless devices and the internet. Headquartered in Los Angeles County, California, THQ sells product through its global network of offices located throughout North America, Europe and Asia Pacific. More information about THQ and its products may be found at www.thq.com. THQ and its logo are trademarks and/or registered trademarks of THQ Inc.

Microsoft, Xbox, Xbox 360, Xbox LIVE, the Xbox logos, and the Xbox LIVE logo are either registered trademarks or trademarks of Microsoft Corporation in the U.S. and/or other countries.

All other trademarks are the property of their respective owners.

The statements contained in this press release that are not historical facts may be “forward-looking statements” within the meaning of the Private Securities Litigation Reform Act of 1995. These forward-looking statements are based on current expectations, estimates and projections about the business of THQ Inc. and its subsidiaries (collectively referred to as “THQ”), including, but not limited to, expectations and projections related to the release of co-op modes for the Warhammer 40,000: Space Marine video game and are based upon management’s current beliefs and certain assumptions made by management. Such forward-looking statements are subject to risks and uncertainties that could cause actual results to differ materially from those expressed or implied by such forward-looking statements, including, but not limited to, business, competitive, economic, legal, political and technological factors affecting our industry, operations, markets, products or pricing. Readers should carefully review the risk factors and the information that could materially affect THQ’s financial results, described in other documents that THQ files from time to time with the Securities and Exchange Commission, including its Annual Report on Form 10-K for the fiscal period ended March 31, 2011 and subsequent Quarterly Reports on Form 10-Q, and particularly the discussion of trends and risk factors set forth therein. Unless otherwise required by law, THQ disclaims any obligation to update its view on any such risks or uncertainties or to revise or publicly release the results of any revision to these forward-looking statements. Readers are cautioned not to place undue reliance on these forward-looking statements, which speak only as of the date of this press release.