The legacy responsible for Fallout makes a long-awaited return.

Wasteland 2 is a game that comes from a long legacy. Dating back to 1988 when the original Wasteland was released, the series went on to inspire the Fallout series and this is evident within it’s theme and setting. Playing as a top-down RPG and set in a harsh and violent apocalyptic setting the game has a lot going for it given how well the Fallout series is so well received. Where it shares similarities to Fallout begins and ends with it theme as gameplay is drastically different. And for the most part is catered to a different audience.

Presenting the player with a customization screen before diving in to it’s gameplay, the player is requested to make some important decisions. There’s preset character classes to choose from based on a line up of survivors each with their own unique back stories, that do well in contributing to the game’s theme of desperation and survival. The player is also free to create their own should they wish to do so. Custom created characters play on a basis of skill points that dictate they’re use and abilities within the game. 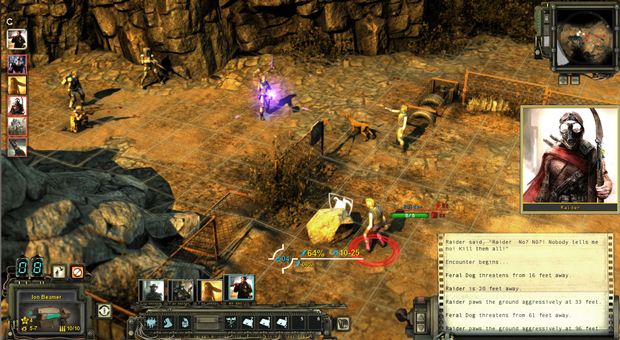 "Dating back to 1988 when the original Wasteland was released, the series went on to inspire the Fallout series and this is evident within it's theme and setting. "

Skills of which the player will earn as he or she progresses throughout the game. Skills such as weapon points, character attributes, and knowledge skills, further divide into their own set of skills more vaguely related to that group.

Personality traits such as hard ass, kiss ass, and leadership, will hold their use case when it comes to interacting with NPCs also with your own team mates. While those such as lock picking, computer science, and alarm disarming will be more beneficial in navigating the world, interacting with objects, and the repairing of items.

Visual properties of character customization tend to be more generic in terms of what you would expect from an RPG. Gender, skin tone, head shape, hair style, and clothing are all of what’s available and they tie in well with the game’s apocalyptic Mad Max style, and setting. One thing that’s strange however is the player’s decision to add an autobiography for their custom character, via the use of a text box. Why? No idea.

Gameplay mechanics are also more standard to most RPGs and don’t present much in the way of diversity. While this isn’t something of a negative it would have been nice to see something new to the genre. Playing as a top-down RPG with a turn-based combat system, there’s an expected learning curve to the game and this was apparent with my first enemy encounter within the game. Using your own skill sets and weapon choices to your advantage there’s an inherent focus on being tactical and strategic with your choices of actions during your turn. 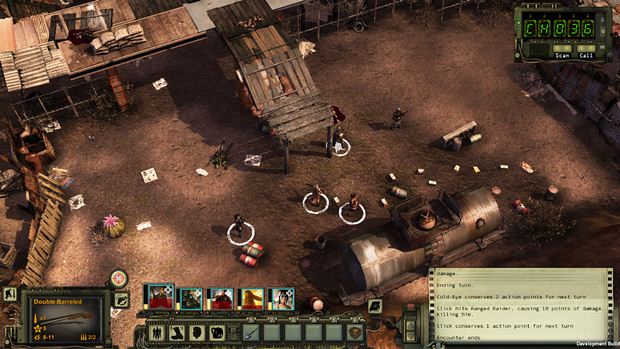 " While those such as lock picking, computer science, and alarm disarming will be more beneficial in navigating the world, interacting with objects, and the repairing of items."

And this can bring about successful results when thought out correctly, not to mention those so undesired. Primarily taking place as group battles between you and your party against those you come across in the game. Your choices and actions may not always lead to violent outcomes.

It is possible to avoid combat altogether and talk your way through things to get where your want or achieve the goal at hand. Choice seems to be one thing that’s presented to the player quite often, through the character’s conversations with each other and their attitudes for how you play things out deliver different results.

It’s always nice to know your behaviour is making a difference and the world attempts to be dynamic rather than static. And as RPGs rely so heavily on choice and immersion it’s good to see the game does this correctly. Aswell as being so obvious about it.

As survival is crucial to progression, the player is given a set amount of health points during combat encounters. When navigating throughout the game’s world however the player is reliant upon water. Should this run out the player will perish, so it’s important to scout the world and keep your character topped up. Looting ammunition, tools, equipment and survival gear are also important to the player’s progression. All of which can be customized or sold on to other characters in the game. 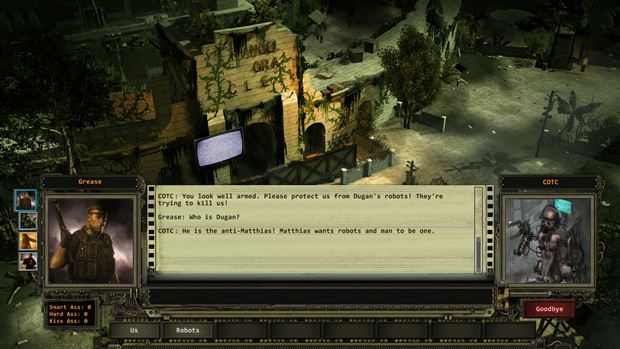 " Primarily taking place as group battles between you and your party against those you come across in the game. Your choices and actions may not always lead to violent outcomes."

As you are given quests simultaneously alongside the game’s main story, you are provided with a log book located to the bottom right corner of the screen keeping track of your actions. This is only a small section of the large amount of on-screen information to keep track off. While it isn’t overwhelming in anyway it can be a touch distracting.

But as the keyboard control scheme is mapped out to accommodate this, as well as your character’s actions it’s not really a problem. Key rebinding is also an option should the player wish to feel more comfortable with the game.

Wasteland 2 is a game with potential primarily for those who become heavily invested in RPGs. As an opening for those who are fairly new or unfamiliar with the genre, Wasteland 2 may not be a  point of entry, and this feels deliberate by design and isn’t doing so in a harsh way. The game knows it’s audience and it’s legacy justifies this aswell.

However the game may change upon release would be at the minimal of expectations, as the mechanics and features that the game nails so well doesn’t require any change. And as the game began in Kickstarter dating back to March 2012 before making it’s way to Steam Early Access of December 2013, it will be interesting to see what lies ahead for the game and it’s longevity in the near future.