An unannounced AAA title is coming by the end of FY17 as well.

We’ve been dancing around rumors of Watch Dogs 2 for a couple of months now, but Ubisoft has now not only confirmed the existence of the game but also divulged it will be coming before the end of the 2017 Fiscal Year. While some might think that means the game could still be more than a year away, the Fiscal Year works a bit differently.

By making it clear Watch Dogs 2 is coming by the end of FY 2017, it means the sequel to the popular but critically mixed game will be arriving on consoles before March 31, 2017. This isn’t the only big news for Ubisoft.

While divulging the plans for Watch Dogs 2, the company also let it slip another AAA title will be landing before March 31 of next year but isn’t ready to spill the beans on just what the new title might be.You can check out the presentation slide which shows Watch Dogs 2, as well as other titles we knew, were going to be coming before the end of FY 17. Along with this games is just the notation “New AAA IP.” 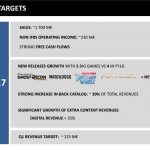