Watch Dogs 2 Review – A Return To Form For Ubisoft

If you can look past the glitches and dumb AI, Watch Dogs 2 is one of the best open world games of 2016.

Back in 2014, Ubisoft were in a bit of a mess. The original Watch_Dogs’ graphics downgrade drama and the disappointing technical glitches of Assassin’s Creed Unity almost butchered Ubisoft’s reputation as a leading games developer and publisher. Both were undoubtedly good games at their core but the controversy surrounding them resulted into a negative spin, downplaying the intriguing gameplay both games presented, especially Watch_Dogs since it bought something really unique to the table.

Watch_Dogs, although a good game in its own right, had a few shortcomings which pushed the developers back to the drawing board for a couple of years and the result of that is Watch Dogs 2, a new entry in the series starring Marcus Holloway, a much more agile, athletic, flamboyant and interesting character that Aiden Pearce could ever be. Perhaps what makes Marcus such a colorful character are his several off the beat and crazy bunch of hackers that are always head and shoulders above even the most daunting situation. 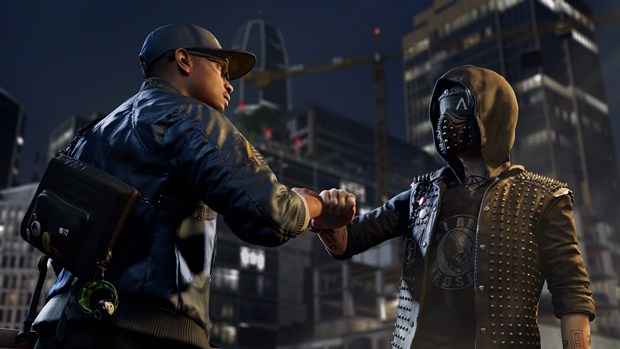 "In the past many years I haven’t played a game from Ubisoft that is so bold in its vision and yet so light hearted and simplistic in its narrative direction."

Whether it is Wrench, the most notable member of Dedsec or Sitara, the group’s public image specialist, each of them have a unique trait that sets them apart and yet makes them feel that they are a single, unified part of this crazy secret hacking collective. But don’t take them for granted…they are a talented bunch whose ultimate goal is to stop the exploitation of the common public by taking down the city’s ctOS 2.0, and Blume, the company behind ctOS.

Watch Dogs 2’s story borrows a lot from the current social climate and issues. As our lives become more and more digitally dependent, a lot of that data is becoming exposed to outsiders who either exploit to control the masses or sell them to bigger companies for profiling. The game’s story does not even shy away from tackling heavy topics and I am surprised how smartly it manages to handle all of these subjects through some excellent voice acting and beautifully crafted in-game cutscenes. In the past many years I haven’t played a game from Ubisoft that is so bold in its vision and yet so light hearted and simplistic in its narrative direction.

However much like many modern open world games, Watch Dogs 2 too struggles to keep its focus on the story. It’s unfortunately one of the curses that seem to plague open world games these days and although Watch Dogs 2’s story telling style tries to maintain balance between narrative and gameplay, it does tend to forget at times that it also has a story to tell. This isn’t necessarily a negative and hardly a show stopper but with such a good story at hand, it’s hard to digest that one of the most exciting parts of the new Watch Dogs takes a back seat at times. 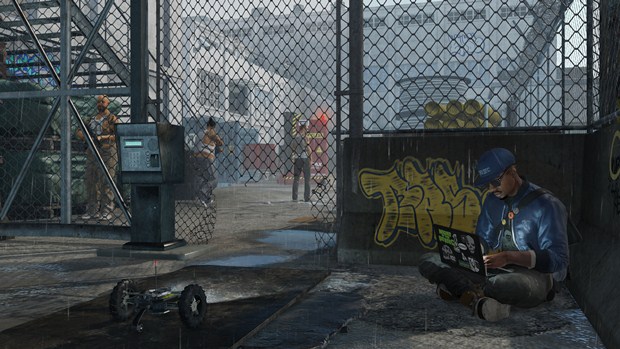 "The bottom line is that even though the hacking system is improved upon, dumb AI and glitches like these can detract players from the experience."

A lot of your time will be spent in downtown San Francisco and this is where the game truly out shines its brilliant predecessor. Hacking mechanics are still very much intact in the sequel but they have been enhanced and made better than ever before. Circuit puzzles are a new addition to the gameplay wherein Marcus needs to ensure consistent flow of electricity through intermediate nodes to unlock power sources, disarm bombs or gain access to important information.

Furthermore, Marcus can also control vehicles and make them crash in random directions or hack an electric junction box to either switch them off or even better, turn it into a proximity mine. But perhaps two of the biggest additions to your hacking armory are the quadcopter and a remote-controlled car, both of which can be used for much more than merely remote hacking or scouting security guards. I completed a number of missions using these gadgets alone and it was a ton of fun due to the number of opportunities these gizmos provided. However, their implementation is weird at times.

For example, in one of the missions Marcus had to active an elevator and I pulled out my remote-controlled car to reach the desired location and did the needful but due to a mistake the gadget got destroyed. I reloaded the checkpoint but instead of the gadget, Marcus was at the check point. How can he be present at the checkpoint when the remote controlled card was initially present there and Marcus was waiting outside the restricted area? Inconsistencies like these do drag the experience down a bit and makes the missions feel less rewarding, should this kind of thing happen to you.

Another shortcoming I wanted to touch upon is the dumb AI which seems to kick in at times. So I am infiltrating an office and I took out the guards in front of the people who were working at their desk and they did not respond. They were just sitting there like they don’t care at all. Although this was most likely a bug in the system and I hardly came across anything like this in my further playthrough. The bottom line is that even though the hacking system is improved upon, dumb AI and glitches like these can detract players from the experience. 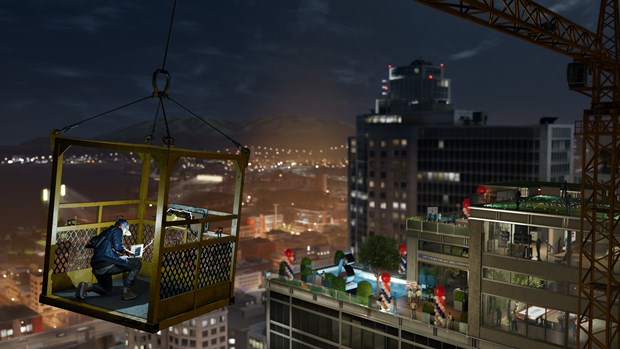 "I was also able to play a good chunk of the game on the PlayStation 4 Pro and I guess it’s safe to assume that playing on Sony’s latest machine delivers the best image quality and with minimal texture pop in."

Remember how in the original Watch Dogs you can get hold of a grenade launcher quite early in the game and create havoc in the streets? Well, this is not the case in Watch Dogs 2 as the grenade launcher is rather costly and you will most likely unlock it at a much later stage. In fact, may times the game encourages you to avoid combat situations and direct confrontations with your enemies. Instead it pushes for a stealth approach, presenting you with a level design that is far more welcoming to your remote controlled car to go in, do its job and get out. I really like this approach to level design as it adds a layer of challenge that the original lacked.

The addition of parkour makes escape easier for Marcus but overall I found its addition rather unwanted. I initially thought that its inclusion will result into Assassin’s Creed like chase sequences but this is clearly not the case here. The original’s robust progression and skill system also returns with plenty of new upgrades that will open new ways to play with the surrounding areas and enemies.

Much praise must also be showered on the game’s performance on the PlayStation 4. The game seems to be running at a rock solid 30 frames per second, an acceptable standard for open world games on consoles. I was also able to play a good chunk of the game on the PlayStation 4 Pro and I guess it’s safe to assume that playing on Sony’s latest machine delivers the best image quality and with minimal texture pop in. 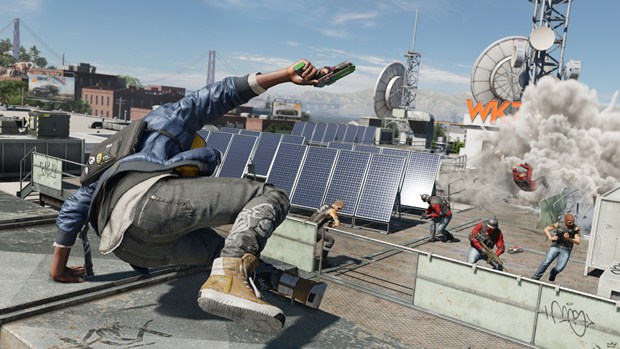 "With its wealth of story and side missions, all backed up by intriguing hacking mechanics, you will never find a time void of fun and excitement."

Regardless of whatever platform you choose to play Watch Dogs 2 on, you can be rest assured of a beautiful looking city with amazing lighting effects and vivid, intricately designed locations, buildings and architecture. The developer team seems to be inspired from the color pallet of Grand Theft Auto 5 and it seems this was the right way to go about it in the sequel.

Watch Dogs 2 offers a lot more than the minor and irritating glitches. With its wealth of story and side missions, all backed up by intriguing hacking mechanics, you will never find a time void of fun and excitement. Its casual way of telling the story and its amazing yet crazy cast of characters will no doubt bring back fans but will also surprisingly appeal to new comers. Overall, Watch Dogs 2 marks a return to form for Ubisoft and this can only mean good things for the gaming community.

Great graphics, excellent voice acting, a story that tackles heavy subjects gracefully, hacking mechanics are back, enhanced and improved, tons of main and side missions.

AI bugs, glitches make a grand return although they were rare in my playthrough.

Final Verdict:
AMAZING
Watch Dogs 2 might very well be the best open world game of 2016. It offers ton of content, different ways to complete missions and brilliant visuals. If you are a fan of open world games, you should be playing Watch Dogs 2. Period.
A copy of this game was provided by Developer/Publisher/Distributor/PR Agency for review purposes. Click here to know more about our Reviews Policy.