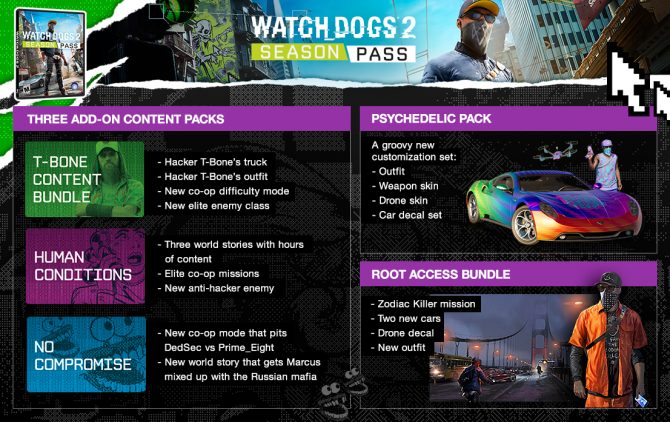 Earlier this week we found out what people who pre-order Watch Dogs 2 can expect to get alongside the game. Now we also know what players should expect if they go ahead and purchase the season pass. The season pass comes complete with brand new co-op challenges, additional levels, new outfits, new vehicles, and new storylines.

The first piece of this season pass is the T-Bone Content Bundle. This brings a character that was introduced in DLC for the original Watch Dogs back to the series. He’s bringing new missions, clothes and vehicles with him. Human Conditions will have players uncovering three new world stories that have to do with corruption in San Fransico’s tech world.

No Compromise has Marcus taking on a Russian mob in a new series of missions. Root Access Bundle features the appearance of someone who claims they are the Zodiac killer. It’s up to Marcus to hunt this murderer down and divulge their true identity. Finally, the Psychedelic Pack brings all sorts of clothes and vehicles with a different feel.

Watch Dogs 2 is due out for the PS4 and Xbox One on November 15, and a few weeks later on the PC.