Watch Dogs 2 Was One Hell of a Game

Taking a look back at the sophomore entry in Ubisoft's open world series.

The world that the first Watch Dogs game created went a long way with changing what could be possible in an open world science fiction action game. Despite it not quite living up to its own promises Watch Dogs did have potential to be something special and stand out from the genre in a meaningful way. Watch Dogs didn’t rub everybody the right way with its initial release, but you’d be hard-pressed to find anyone who wouldn’t at least acknowledge that it’s sequel Watch Dogs 2 was a massive improvement in myriad ways.

Of course, the open-world action-adventure genre is nothing if not completely crowded and bursting at the seams with creative games that are all trying to do something special to stand out. Watch Dogs 2 succeeded at standing out in its genre more than many other games of the same genre and at that time did. By greatly expanding on the ideas of the original game, and introducing a character that was far more interesting and fun to play as, Watch Dogs 2 finally made good on much of what was expected of the original game while also injecting a little bit extra here and there for good measure.

Developed by Ubisoft Montreal, Watch Dogs 2 was no slouch in terms of scope, possibilities, or just overall polish. Instead of just doing more of the same from the original game and slapping a 2 on it, Ubisoft Montreal deliberately collected as much feedback from fans of the original game as possible and addressed it in the second game by greatly expanding what was possible and just making it more fun to do it. First and foremost, the best thing that Watch Dogs 2 switched up was its general attitude towards the idea of what it is. Where the first game was trying to be somewhat gritty, dark, and mysterious, Watch Dogs 2 went out of its way to be a little bit more lighthearted about the whole thing.

That’s not to say that the game didn’t rely on a fairly serious cyberpunk story and meaningful motivations to go along with it, but something about the writing and the setting of Watch Dogs 2 just made it feel a little bit more like a fun sandbox that was just more inviting to me as a player than the original, a game that almost seemed to be so cryptic that it didn’t even want to be played. This was a very smart idea for the sequel, given that games like Grand Theft Auto and Saints Row have undeniably seen more success and established more of a meaningful identity for themselves by opening up to the possibility of just being a game for players to have fun in. Maybe they could encounter a meaningful story along the way if they wanted to but if not that would be fine. For this sort of game, it’s always best to leave that sort of thing up to the player to decide.

Watch Dogs 2 drives its point home so much better than the original did in large part because of the main character, Marcus Holloway, a wrongfully accused individual, that, because of his illegitimate criminal record placed on him, actually becomes a threat to the system that wronged him. It’s not a particularly unique sci-fi story. Surely older movies like Logan’s Run deserve a wink and a nod here, but the alternate 21st century twist on everything does keep it from gliding too far into familiar territory. This is another thing that Watch Dogs 2 gets very right that a lot of other games don’t. It skillfully borrows ideas from things that have worked in the past but injects just enough of its own flavor to make its DNA feel fresher than it actually is. There’s certainly nothing wrong with that. In fact, in this day and age with so many ideas being done to death, including cyberpunk stuff, It’s nice to see things that feel fresh and unique even if they only offer occasional glimpses of their own ingenuity here and there. 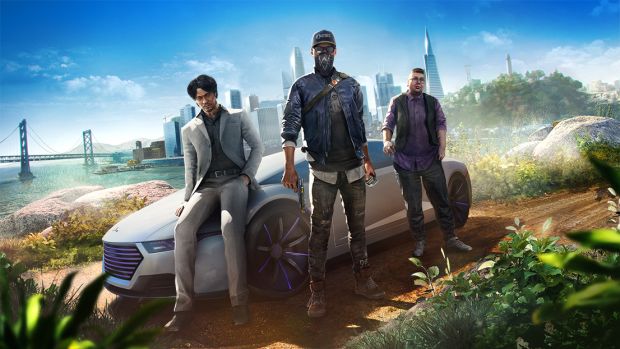 The futuristic yet still modern version of San Francisco is expertly recreated in Watch Dogs 2. Familiar densely-packed building structures line the streets of the city and perpetuate the feeling that this is where you are; a futuristic West Coast where anything goes if you know how to harness technology. The city is not just brimming with reminders of its locale though, what’s more important is that there are opportunities for all kinds of shenanigans at every turn.

Where the original game stopped just short of making you really feel like you were in charge of the city, Watch Dogs 2 gives you control over an arsenal of devices like remote controlled cars and drones that can give you a much better idea of what is going on around you, and help you plan out and execute elaborate schemes for any situation. Hacking traffic lights and security cameras return, but here, there’s more of them, more types of them, and more options of what to do once you have control of them. It’s not quite what Watch Dogs Legion seems like it’s shaping up to be but in terms of what was expected of open world games in 2016, Watch Dogs 2 was a shot out of a cannon in this regard.

Meeting up with other players online and aiding each other in completing various missions was also a nice touch that brought Watch Dogs 2 up another notch over its competition. Even still today most open world action-adventure games tend to focus mostly on their offline content, and there’s nothing wrong with that, especially if what’s in the offline content is satisfying and worth the asking price.

Watch Dogs 2, as usual, goes a little bit further than that though with several multiplayer modes that include racing, 2 v 2 battle mode, cooperative modes, and more, that all use the world of Watch Dogs in a way that would only make sense here. They easily could have just crammed generic multiplayer modes from a Call of Duty game into a watchdog game and called it a day, but seeing as how hacking the city and being in control of surveillance are key elements in the multiplayer modes in Watch Dogs 2 they feel unique to this game and not just tacked on.

In the few areas where Watch Dogs 2 struggles, it more than makes up for its wealth of ways to play and scope of things to do in the game. The depth that its ideas are taken to are a sight to behold regardless of how you feel about the direction of the game’s story or its characters. At the end of the day this is a densely-packed Ubisoft style open world game, as such, some folks who might feel burned out on that sort of thing might have passed this one up. I think that would have been a mistake though. Not only does Watch Dogs 2 learn from the lessons of the previous game in multiple ways, but it manages to change what was a franchise destined for mediocrity into an unmatched sandbox of cyberpunk goodness for all of those who want some.