Wave Race Revival May Be in the Works, Nintendo Teases

He basically stops short of outright announcing a new one. 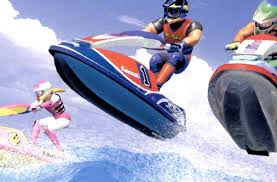 One of Nintendo’s most under the radar series was Wave Race, a racing game series that was exactly what the name advertised—you racing on water. The series was well known for its graphical fidelity (Wave Race set standards on the Nintendo 64 for how great it looked), as well as for its fantastic water physics.

There hasn’t been a new one of those in a very long time, however—Wave Race: Blue Storm was the last game released, and it came out on the GameCube all the way back in 2001. But a revival for the franchise may be in the works for Nintendo Switch. Shinya Takahashi, the producer for the series, recently teased that a new entry in the franchise might be in the works.

Speaking to Fandom at the 14th British Academy Games Awards, Takahashi said, “You may see that game again. We have been trying to make many games, so that may be one of them… And I personally love Wave Race.”

Which is, really, as explicit as he could have gotten without outright announcing a new one—so what do you think, a new one getting announced at E3 this year? Will the Nintendo Switch be able to do the series’ reputation for being on the cutting edge justice? Hopefully so—and hopefully, the revival is worth the long, long wait.