Karaoke is one of the most popular recreational activities in Japan, but it enjoys a much less acceptable reception in western culture. Despite our reticence to sing in public, the karaoke genre has been booming in recent years, with titles like Singstar and Lips dominating the party genre on the Playstation and Xbox brands respectively. Without a flagship title to fit into the genre, the Wii singing game is fair play, so Nordic Games have valiantly stepped up to the plate with We Sing. 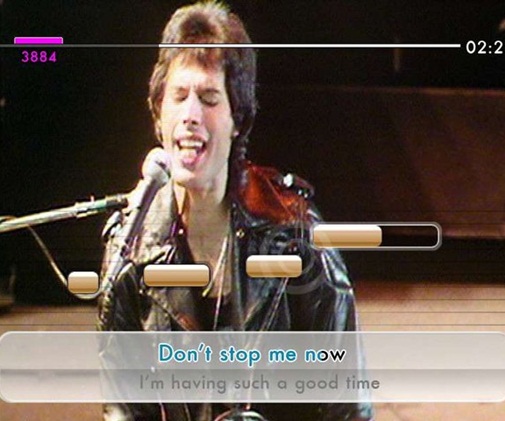 If you don’t want to sing along to this one, you probably don’t have a soul. Just saying.

No points are awarded for guessing that We Sing is all about a group of people getting together with some plastic microphones and butchering classic chart hits. The game doesn’t exactly re-invent the wheel when it comes to the singing genre, but it does a solid job with its pitch detection mechanics. Appropriately raised or lowered bars appear to dictate the pitch of a particular vocal phrase, and getting it right rewards you with mild visual confirmation of your success and a handful of points you can use to boost your musical ego. This visual confirmation is where things start to show signs of getting rough though, as it isn’t quite as clear as you’d like it to be. Unlike other competitors in the genre, We Sing doesn’t always display your current pitch on screen when you’re in certain game modes. The co-operative mode (also titled We Sing) is the particular offender, being only capable of telling you whether you are wrong or right, not how sharp or flat you are of a particular note. It’s frustrating enough to not do justice to Rick Astley’s baritone goodness, so not knowing how to correct my mistake in future really ground my gears.

That said, the few times you’re performing pitch perfect, We Sing does a solid job at letting you express your inner pop icon. The pitch detection is accurate and alters according to your difficulty selection, and the two USB Logitech microphones that came bundled with the copy of We Sing we received did the trick. They felt a little flimsy and the lack of a wireless alternative did feel like a step back to the hardware of last decade, but they offer a price effective way to get you and a friend to embarrass yourselves to your favourite UK hits. 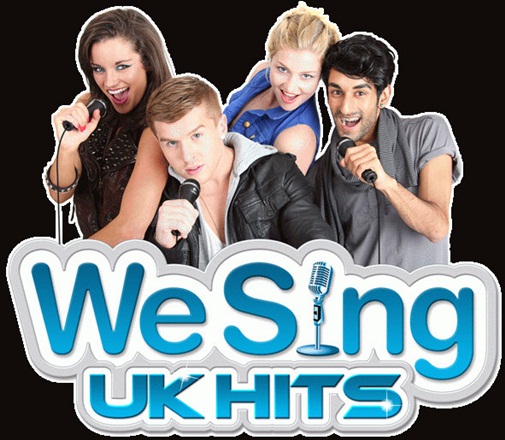 These guys won’t be smiling when they realise there are no DLC tracks.

With the basic mechanics propping it up, We Sing UK Hits reaches the make or break situation of the track list. Surprisingly, for what is priced as a budget title, We Sing does an exemplary job with its musical content. There’s an immense variety in the forty tracks on disc, spanning fifty decades of music with more genres than you could shake a stick at. It also offers a decent amount of cheesy tracks, ones so alluring that even the most self-conscious of your peers couldn’t possibly resist. Few people can say no to Wham, and that’s a fact. The variety does mean there might be several tracks that aren’t up your alley, with many of my peers refusing to even attempt the rap tracks. It’s a valid concern, but the quality of the majority of tracks generally makes up for this.

Like most games, We Sing has some graphical components in between (what passes for) you singing. The first graphical flourishes we’re treated to are the game’s menus and, whilst it probably sounds incredibly picky, they aren’t exactly the most intuitive things to navigate. There’s some weird pseudo-motion control malarkey going on that can get in the way of selecting things, and some of the game mode and option descriptions have atrocious spelling and grammar. It’s such a small thing to pick up on, but it really does denote a lack of care and polish that has gone into some segments of We Sing. On the other end of the visual quality spectrum, we have official music videos to play in the background of your selected track. A nice touch as always, and you can also play the music videos separately if you’re really intent on watching George Michael boogy without any game-related distractions. 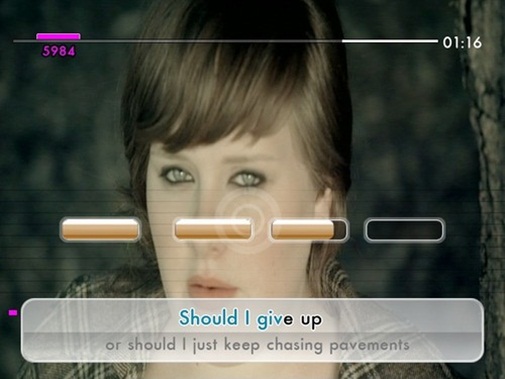 Official videos are a welcome inclusion, even if it does mean having to look at Adele.

All in all, We Sing does a fairly good job in spite of its occasional shortcomings. The big issue that eventually becomes clear however, is the lack of longevity. There are plenty of different modes to sink your teeth into, but none of them really stray at all far from the classic “sing better than everyone else” paradigm. What’s a bigger issue is the lack of expansion opportunities. In the age of DLC, music games simply cannot survive on their on-disc tracks alone. Without any kind of download store for additional tracks, the library of We Sing UK Hits is severely crippled in spite of its quality. For this reason alone, karaoke fans would be better served by competing franchises on other consoles. If you only have a Wii and are desperate for a cheap and cheerful singing romp, We Sing should suit you well, provided you are aware of its shortcomings.

Final Verdict:
FAIR
A solid attempt at a Wii karaoke game, We Sing stumbles with basic interface and presentation issues and poor longevity, but a strong track list manages to redeem any technical fumbles the game makes elsewhere
A copy of this game was provided by Developer/Publisher/Distributor/PR Agency for review purposes. Click here to know more about our Reviews Policy.