As an indie studio on the verge of putting out its debut title, WolfEye Studios might not be a name that the masses are familiar with, but given the fact that it was founded by former Arkane veterans who created the likes of Dishonored and Prey, it’s not a surprise that their debut game, Weird West, is one that’s been getting a lot of attention since its announcement. Rather than buckling under the weight of expectation though, Weird West instead thrives under it. Blending the action RPG and immersive sim genres in a dark, utterly fascinating setting, this is an excellent game that emphasizes choice and encourages curiosity, and delivers an experience that never says no to the player.

Weird West had its hooks in me right off the bat, before I could even begin tinkering with its complex systems and web of reactive mechanics, and the game’s setting is hugely responsible for that. You’ll find yourselves in the wild west, but this is not the American frontier that you’re familiar with. There are plenty of outlaws, cowboys, and sheriffs, sure, but this world also hides dark and deadly secrets, from werewolves and pigmen to covens of witches and more. The blend of wild west and dark fantasy isn’t something that we’ve seen in games all too often, and Weird West benefits immensely from the inherent uniqueness of its setting.

"Blending the action RPG and immersive sim genres in a dark, utterly fascinating setting, this is an excellent game that emphasizes choice and encourages curiosity, and delivers an experience that never says no to the player."

Novelty can easily wear off though- what endures is quality and depth, and Weird West’s world has that in spades as well. The frontier is a rich, immersive world that feels authentic and lived in. There’s plenty of lore and backstory tidbits tucked away in the game for those who’re curious enough to seek it all out, and the main story itself pulls on a lot of threads, bringing a number of consistently elements into the forefront at a consistent pace. The writing, meanwhile, is top notch, fitting the game’s setting and aesthetic to a T without ever feeling over-indulgent.

What really makes Weird West’s world come alive, however, is how staggeringly reactive it is to nearly each and every thing you do. The immersive sim genre hinges first and foremost around systemic gameplay, where a web of mechanics interacts with each other in such a way that at any given point in a game, players can tackle objectives in a variety of different ways. Weird West is all about that. It puts emergent gameplay front and center, encouraging you to experiment and then reacting to you in consistently delightful ways.

That reactivity and emphasis on player agency is something that manifests in the game on both a macro and micro level, making it extremely malleable to player action at every level of interactivity. Weird West is constantly keeping track of what the player is doing, and then reacting to it in unexpected ways, on both a broader level and the smaller moment-to-moment stuff. On a macro level, for instance, elements such as weather and time of day obviously impact how things play out. When its dark out, for instance, enemies have lower visibility, and in towns at night, when everything is closed and everybody’s asleep, you can try and break into shops and banks and empty their coffers. When it rains, the puddles that you form on the ground can be used to your advantage if you have any electricity-based attacks, and when it’s windy, you might spontaneously find yourself facing a rapidly growing twister. 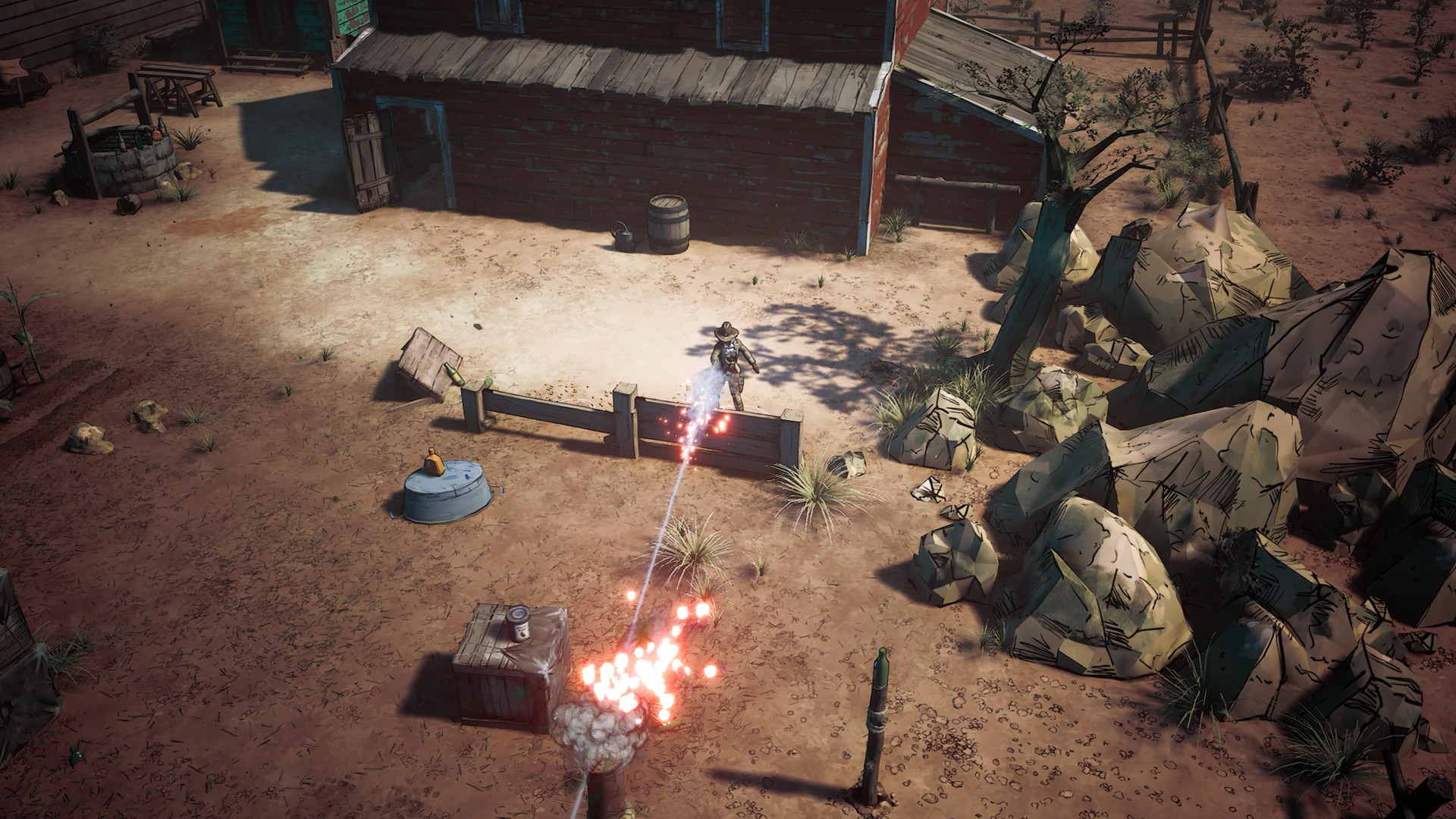 "Weird West’s reactivity and emphasis on player agency is something that manifests in the game on both a macro and micro level, making it extremely malleable to player action at every level of interactivity."

How you choose to conduct yourself also has a big impact on your playthrough. Rescuing a caged NPC while making your way through a bandit hideout might earn you a loyal friend who can, in later combat encounters, ride in guns blazing to come to your aid. You can head into a town and kill every NPC there, and when you come back later, you could find it dead and empty, but you can also find it taken over by wolves or bandits. Every single character, no matter how crucial to the story, can be killed at any time, and the game will track that and take it into account. If you commit too many crimes and your reputation tanks to low, the law might try and put you in jail, or even put bounties on you, when means you might then have to deal with bounty hunters looking to make some money. If you take too many actions that your a party member disagrees with, they might leave your party entirely. If you’ve wronged a person in some way, they’ll remember you and try and hunt you down later on.

And all of that is barely scratching the surface. The elaborate machinery of Weird West that’s constantly ticking behind the scenes to react and respond to your actions no matter what you do is staggering, and makes every moment of the game feels like it’s full of endless possibilities. Sure, that’s not always true – it can’t be – but even on the off chance that Weird West is just creating an illusion of choice (which is very rare) it still feels magical.

Then there are the less obvious things the game is also tracking and reacting to, smaller moment-to-moment things- like how you approach combat situations. When in stealth, you can try and sneak past enemies, try and distract them in any number of ways, or maybe even try luring them into environmental traps. In firefights, you can choose to play it straight and just fire at foes from behind cover, but Weird West also rewards you for being creative, so if an enemy is ducking behind a crate, you can just shoot the torch on the crate to make it explode and set them on fire. In all of these ways and more, the game feels rife with unpredictability, dynamism, and responsiveness, so mundanity or repetition never set in.

I have some issues with combat in Weird West though- not with any mechanics or design choices, but with how it plays. As an isometric action RPG with combat that hinges primarily on twin stick shooting, this is a game that’s best played with a mouse and keyboard. I played it on a PS5, and often struggled with the controls. The aiming sensitivity never felt right to me, for instance, and the button mapping, too, proved problematic at times, especially during tense fights. Using throwable weapons in particular always feels clunky. The camera, too, was occasionally bothersome, mostly because of its rigid zooming options. Rather than allowing more granular control, Weird West just allows three zooming pre-sets with presses of the right stick, and I often found myself in situations where the game wasn’t showing me exactly what I wanted to see. 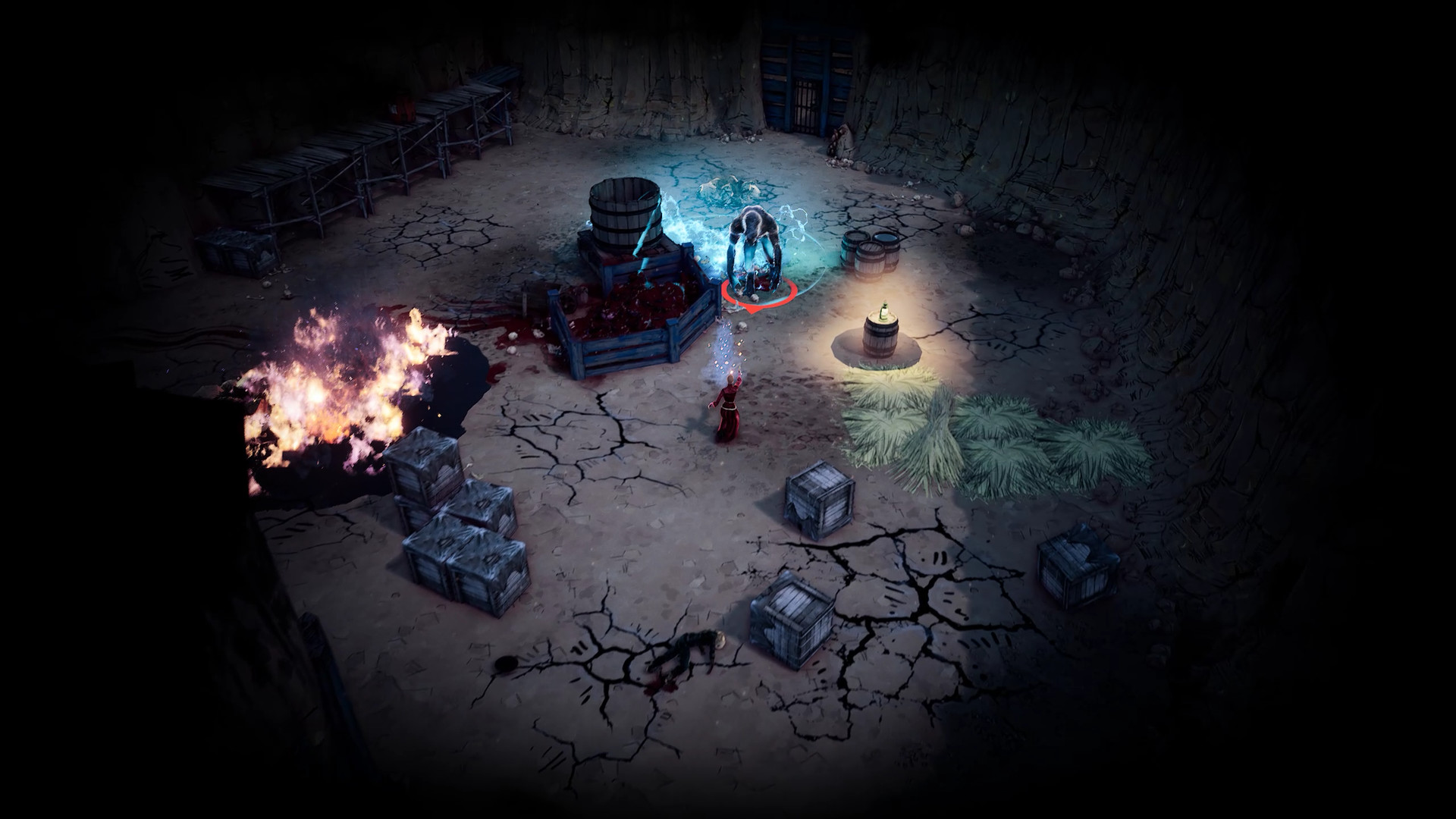 "The elaborate machinery of Weird West that’s constantly ticking behind the scenes to react and respond to your actions no matter what you do is staggering, and makes every moment of the game feels like it’s full of endless possibilities."

Even so, Weird West finds other ways to make combat even more enjoyable, from an incredible bullet time mechanic that adds a cinematic flair to shootouts to progression systems that allow you to build your characters in interesting ways. Using golden cards and Nimp Relics, you can unlock a number of perks and abilities, ranging from stealth to combat, supernatural to otherwise, lowering shop prices and allowing you to throw barrels, and much more. Meanwhile, equipment and weapons are also a crucial part of the metagame, and finding powerful weapons or armour or upgrading one of your weapons with ore found in environments always feels rewarding.

Given how strongly the game encourages you to just mess about in its world and play with its systems, it isn’t exactly in dire need of optional content- even so, there’s plenty of it, like side quests, bounties, and more, while you can also discover new optional locations to explore while traveling on the overworld map. A lot of this side content quickly begins feeling repetitive though. Weird West uses randomization for much of its side content, and while that does mix things up across playthroughs, it also means that you’re often going to be going through the same or similar side locations to kill enemies you don’t care about. It quickly begins feeling like going through the motions.

These issues, however, are all easy to ignore, because there’s so much more to love in Weird West. There aren’t a lot of games out there that are this committed to letting the player do as they please, but Weird West never says no to you. It lets you lose in its dense, meticulously crafted sandbox of emergent mechanics, and reacts to every single thing you do, crafting an experience that feels entirely of your own making. That’s what makes immersive sims so special, and even in that group, Weird West feels like a landmark achievement.

A fascinating setting, brought to life excellently; Engaging storytelling; Places an extreme emphasis on player choice; Reacts to everything that you do on both micro and macro levels in consistently delightful ways; Enjoyable stealth and combat; Solid progression mechanics.

Occasional camera and control issues when played on a gamepad; Repetitive side content.

Final Verdict:
AMAZING
Densely packed with ingenious systems, Weird West is a game of endless possibilities that encourages player choice and agency in a way very few other games do, and reacts to your actions across every level of interactivity. Fans of immersive sims and action RPGs won't want to miss this.
A copy of this game was provided by Developer/Publisher/Distributor/PR Agency for review purposes. Click here to know more about our Reviews Policy.